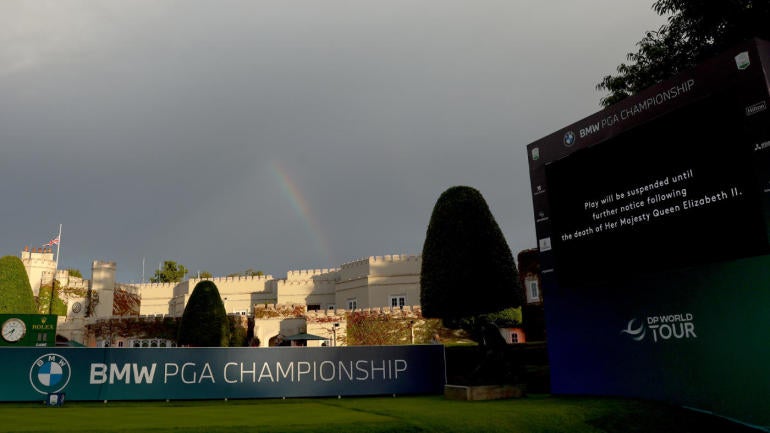 “The second round of the BMW PGA Championship will resume at 6:40 a.m. on Saturday morning and all original second round tee times will remain the same,” the DP World Tour released in a statement. “Those players who are yet to complete their first round will do so from 7:30 a.m. onwards from the place on the golf course where they stopped on Thursday afternoon.”

The tournament, the biggest on the DP World Tour, will be cut down to 54 holes in lieu of the standard 72 holes.

“The Rolex Series event will now be contested over 54 holes with the intention to finish on Sunday as scheduled,” the statement said. “It is not possible to play the full 72 holes and finish on Monday as we cannot guarantee the staff, facilities or security of the venue on Monday due to the on-going plans for the state funeral. Across the weekend at Wentworth, black ribbons will be made available for people to wear and flags will continue to fly at half-mast.”

This means the opening rounds of 8-under 64 courtesy of Englishmen Andy Sullivan and Tommy Fleetwood and Norwegian Viktor Hovland hold even more weight as the trio possessed the co-lead at the conclusion of play on Thursday. With only 36 holes to play, the task to chase down those at the top of the leaderboard becomes all the more difficult for pursuers.

There was no mention of a change to the cut in the DP World Tour’s statement, so it should be safe to assume it will take place following the initial 36 holes. With Rory McIlroy and defending champion Billy Horschel four strokes off the pace, and Matt Fitzpatrick and Jon Rahm even farther back, flawless golf will need to be played over the weekend if they are to raise the biggest trophy on the DP World Tour.

Arsenal’s Europa League fixture against PSV expected to go ahead

How to Watch Harvard at Cornell: Stream College Football…

How to Watch Shriners Children’s Open, Second Round:…