2022 NHL Playoffs: Hurricanes fall to 0-5 on the road this postseason after 4-1 loss to Rangers at MSG 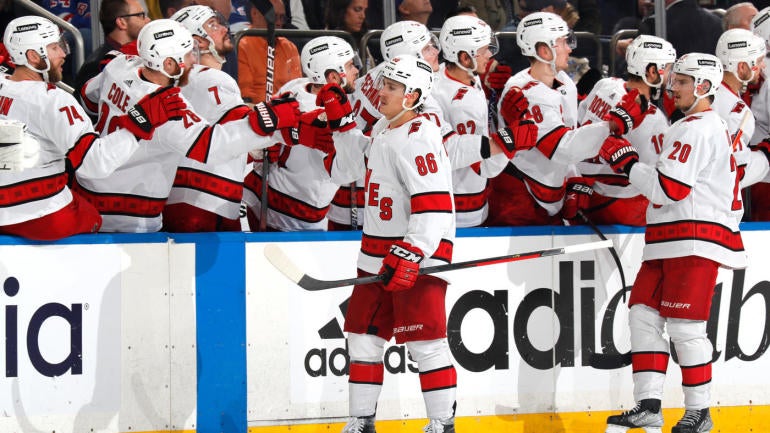 The Carolina Hurricanes have played at a Category 5 level at home during these Stanley Cup Playoffs, winning all six games at PNC Arena with a +15 goal differential. On the road, though, Carolina has been about as powerful as an afternoon drizzle, and the trend continued Tuesday.

With a 4-1 loss to the New York Rangers at Madison Square Garden, the Hurricanes fell to 0-5 on the road this postseason. Carolina has been outscored by 13 over those games against the Boston Bruins and Rangers.

Carolina has overcome its road woes by winning every single home game this postseason — a path, while unconventional, that could theoretically get the team to the Stanley Cup Final. As the Eastern Conference’s No. 2 seed, the Hurricanes will have home-ice advantage through the conference final thanks to the top-seeded Florida Panthers’ second-round flameout.

The Hurricanes’ home-road splits are baffling considering their regular-season record. Carolina went 25-14-2 on the road in 2021-22, tied with the Calgary Flames for the second best mark in the NHL. Only the Washington Capitals had a better road record at 25-10-6.

In the first round, Carolina topped Boston in a seven-game series where the home team won every matchup. The Hurricanes proceeded to win their next two games against the Rangers at home, allowing only one goal in the process. But New York dominated Carolina in its first two games at MSG, collecting a goal differential of 7-2.

The Hurricanes and Rangers will meet in Raleigh for Game 5 on Thursday before heading back to New York for Game 6 on Saturday.  If recent history is any indication, NHL fans should get ready for a Game 7 between the two at PNC Arena on Monday.

King of the jungle Crossword Clue