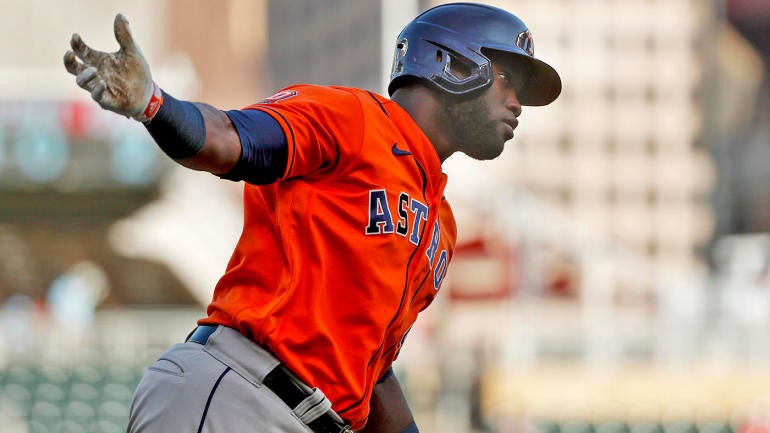 The Houston Astros picked up a pair of victories against the Minnesota Twins on Thursday and in doing so extended their current win streak to 10 games, pushing their lead over the Los Angeles Angels in the American League West standings to a half-game.

In the first contest, which was the completion of Wednesday night’s suspended game (weather), the Astros turned a 5-1 lead at the time play was halted the prior evening into an 11-3 win, as Jose Altuve and Kyle Tucker each homered.

Houston also prevailed in the regularly scheduled Thursday game by a score of 5-0. Luis Garcia scattered five hits across as many innings and struck out nine. From there, three Houston relievers kept the shutout intact. Yordan Alvarez did the heavy lifting on offense, as he homered twice and joined Aaron Judge of the Yankees as the lone players to reach double digits in home runs for the season. Here’s the second of those two home runs:

Jeremy Peña, Carlos Correa’s replacement at shortstop, went 3 for 3 to give him five total hits across the two games. Peña, who now boasts a rookie slash line of .283/.342/.519, was forced to leave the second game with knee discomfort and is listed as day-to-day.

That second outcome marked the Astros’ third shutout in their past four games, and that leads into this:

To repeat for fitting emphasis, yes, the Astros have allowed a total of just 11 runs over their past 10 games. That’s highly impressive for any team, let alone one that seemed to have rotation questions coming into the season.

Also of note is that the Astros aren’t exactly strangers to such lengthy win streaks, at least in very recent seasons:

The Astros (21-11) will attempt to extend their current streak on Friday as they begin a weekend road series against the last-place Nationals. That begins a stretch of schedule in which Houston will play 28 of 31 games against teams with losing records.

Blox Fruits: How To Get Dragon Talon Fighting Style