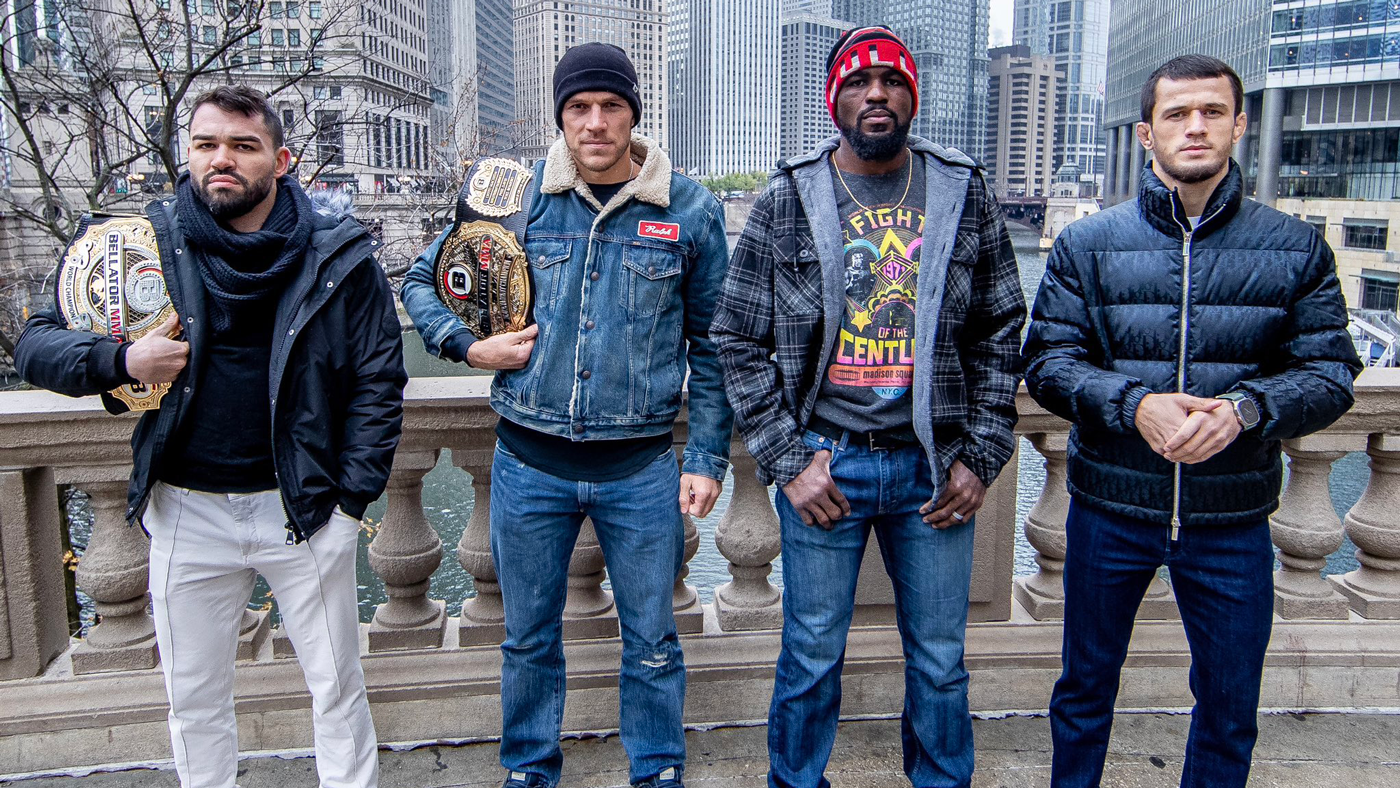 Light heavyweight champion Vadim Nemkov and lightweight champion Patricky Pitbull appear to have their backs against the wall at Bellator 288 against challengers Corey Anderson and Usman Nurmagomedov, respectively. Both titleholders are on track to enter the Wintrust Arena in Chicago, Illinois on Friday night as underdogs.

Nemkov (15-2, 1 NC) was building his case as arguably the best light heavyweight in the world before running into Anderson in the finals of the $1 million Bellator Light Heavyweight Grand Prix. Nemkov got off to a fast start, the same kind of offensive pressure that earned him stoppages over Ryan Bader and Rafael Carvalho, but Anderson weathered it well. Anderson’s wrestling and ground-and-pound took over in Round 2. The UFC alum appeared on track to win his first world title in a major organization, but fate intervened. An accidental headbutt cut Nemkov, leading to a doctor’s intervention and a no-contest ruling.

“I didn’t really learn anything new in the time that we fought, because everything that I already knew about him he displayed,” Nemkov told reporters at Bellator 288 media day this week. “There were some factors in the first fight that attributed to my decline. Because I started out pretty well in the first round, actually on the scorecards, I think it was even going into the third round. Then the decline happened and it’s largely because my camp was very long. The date [of the fight] kept changing, and I just kept staying in this peak shape. I feel like I peaked before the fight date, so on the fight date, I was kind of already exhausted.”

Can’t get enough boxing and MMA? Get the latest in the world of combat sports from two of the best in the business. Subscribe to Morning Kombat with Luke Thomas and Brian Campbell for the best analysis and in-depth news, including a preview of what to expect at Bellator 288 below.

The fight played out exactly how Anderson (16-5, 1 NC) had predicted. Following a 51-second knockout of former two-division champion Bader, Anderson prophecized a takeover in his Nemkov fight after weathering an early storm. “Overtime” is surging with confidence heading into an immediate rematch against the champion.

“He’s like a hot pocket. You put them in the microwave and they come out hot. You don’t want to touch it right away. You just need to wait a little bit, it’s going to cool down,” Anderson told “Morning Kombat” about his prediction going into their first fight. “I said he was going to come out like a ball of fury every time. But the thing is, most guys try to go there with him. They try to keep up with his pace and they got tired. The thing is, I’m a cardio machine so I can keep up with that pace and I’m going to turn it up a little bit. I’m going to wait and when he starts slowing down, I’m going to take over. There was really no surprise. It went exactly how I expected.”

Pitbull (24-10) finds himself as the main card’s biggest underdog despite having the Bellator lightweight championship around his waist. Perceived by some as a paper champion, Pitbull claimed the title by knocking out Peter Queally after Patricio Pitbull vacated the title, in part, so that his brother could compete for it.

“A lot of people talk about this: I’m not the real champ because my brother vacated the title. How can people say this?” Patricky Pitbull told CBS Sports. “I beat Peter Queally and I finished him in the second round. Why am I not the champion? I am the real champion. I will show everyone on Nov. 18.”

Usman Nurmagomedov (15-0) attained his status as the No. 1 contender following four consecutive wins under the Bellator banner, including first-round finishes in his last three. He is the younger cousin of his coach, former UFC lightweight champion Khabib Nurmagomedov, and a teammate of reigning UFC lightweight titleholder Islam Makhachev. Expectations are high for the 24-year-old as competitive tension pulses through his training camp at American Kickboxing Academy.

“To be honest, the situation in the gym is tense right now,” Usman Nurmagomedov told CBS Sports. “Everybody wants to get better, everybody is hungry and everybody is learning every day. They’re getting experience from the champions, from people who have already been through it. It’s life. The elderly are leaving and the new generation is coming.”

Check out the full interview with Usman Nurmagomedov below.

Here’s the fight card for Bellator 288 with the latest odds from Caesars Sportsbook.

Vadim Nemkov vs. Corey Anderson: Anderson predicted their first fight to a tee. Anderson endured Nemkov’s early fury, conceding Round 1 before winning the next two by progressively greater degrees. The accidental clash of heads was a shame as Anderson appeared primed for a fourth-round TKO. The inconclusive outcome also stripped viewers of the chance to see how Nemkov endured such hardship. An even more competitive fight should be expected the second time around. Nemkov will be more mindful to conserve his energy and further shore up his takedown defense. Anderson is gaining confidence with each performance and has developed reliable knockout power to complement his top-notch wrestling game. Anticipate a closer fight the second time around, but one that shares a similar trajectory. Nemkov should have enough in the tank to fight three competitive rounds before Anderson’s superior cardio becomes a difference maker. A 3-2 lead over five hard rounds for Anderson could be in the cards. Anderson via UD