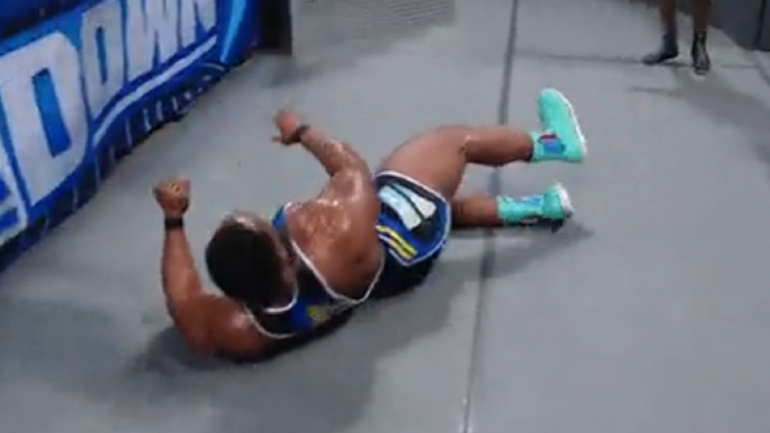 Big E suffered a broken neck during Friday’s episode of SmackDown. He was stretchered off after a terrible landing during the show’s opening match. The former WWE champion landed on the crown of his head while taking a suplex outside of the ring.

Big E and Kofi Kingston vs. Sheamus and Ridge Holland kicked off Friday’s episode of WWE SmackDown. During the match, Holland delivered a belly-to-belly suplex to Big E outside of the ring. Big E did not fully rotate to his back and instead took the bump square on the top of his head. Big E appeared to be injured and laid motionless after landing on the ground. Commentator Michael Cole noted that medical personnel were attending to the member of New Day.

He shared a video on social media confirming the serious injury suffered while ensuring he would be OK.

“I can’t thank all of you beautiful people enough for your concern and your messages, it’s very heart warming,” Big E said. “I can move all of my digits [fingers], you see that, that’s nice. That’s always a good thing. Strength feels fine, but unfortunately right now they tell me my neck is broken. I’ll be alright, I’ll be good, don’t worry.”

Big E updated his status on Saturday, noting that he suffered non-displacement fractures of his C1 and C6 vertebrae, but avoided any damage to his spinal cord. He also noted that he did not suffer any ligament damage and will not have to undergo surgery to repair any of the damage.

Footage captured by fans in attendance showed Big E being stretchered away during the match. WWE did not air footage of the superstar being stretchered out. The promotion will generally cut to footage of medical personnel if the injury is scripted as part of a storytelling angle.

WWE has yet to release a statement on Big E’s status.