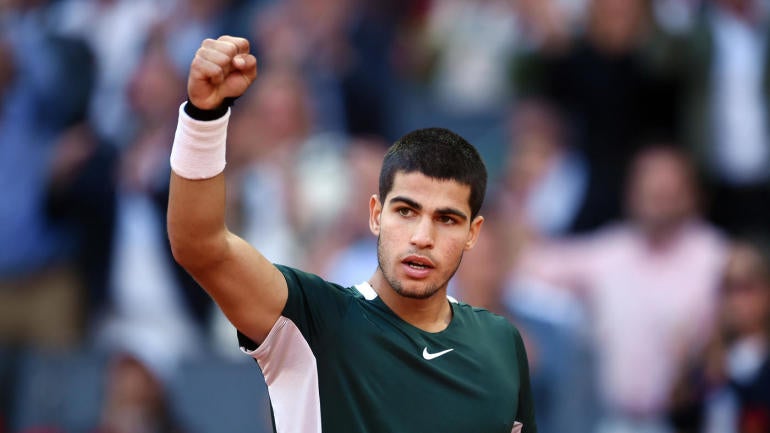 Carlos Alcaraz became the youngest player to reach a final in Madrid Open history after taking down world No. 1 Novak Djokovic during Saturday’s semifinals. The Spaniard pulled off the huge upset only two days after he turned 19.

In a match that lasted three hours and 35 minutes, Alcaraz defeated Djokovic 6-7 (5), 7-5, 7-6 (5) despite losing the first set. The win marked Alcaraz’s sixth straight against top-10 opponents.

Alcaraz reached the semifinals by defeating world No. 4 Rafael Nadal in the previous round. Nadal was already going to be a tough opponent, but Alcaraz faced even more of a challenge after rolling his ankle during the third game of the second set. Even so, Alcaraz walked away from the quarterfinals with a hard-fought 6-2, 1-6, 6-3 win in a match that lasted almost two and a half hours.

Before this weekend, no player had ever defeated Nadal and Djokovic in back-to-back matches in the same clay court tournament. Alcaraz became the first on Saturday, and his joyous celebration after the Djokovic win explains exactly how much it meant to him.

“It was so close,” Alcaraz said after defeating Djokovic. “… I think both of us played an unbelievable match.”

Djokovic’s loss means he still chasing a title this season, while Alcaraz could be winning his fourth on Sunday. After his semifinal win, Alcaraz told reporters that beating two veterans in Djokovic and Nadal has given him confidence for the rest of the season because now he knows he can win against the best.

Alcaraz will put that confidence to the test on Sunday, as he’s set to face world No. 2 Alexander Zverev in the Madrid Open final.