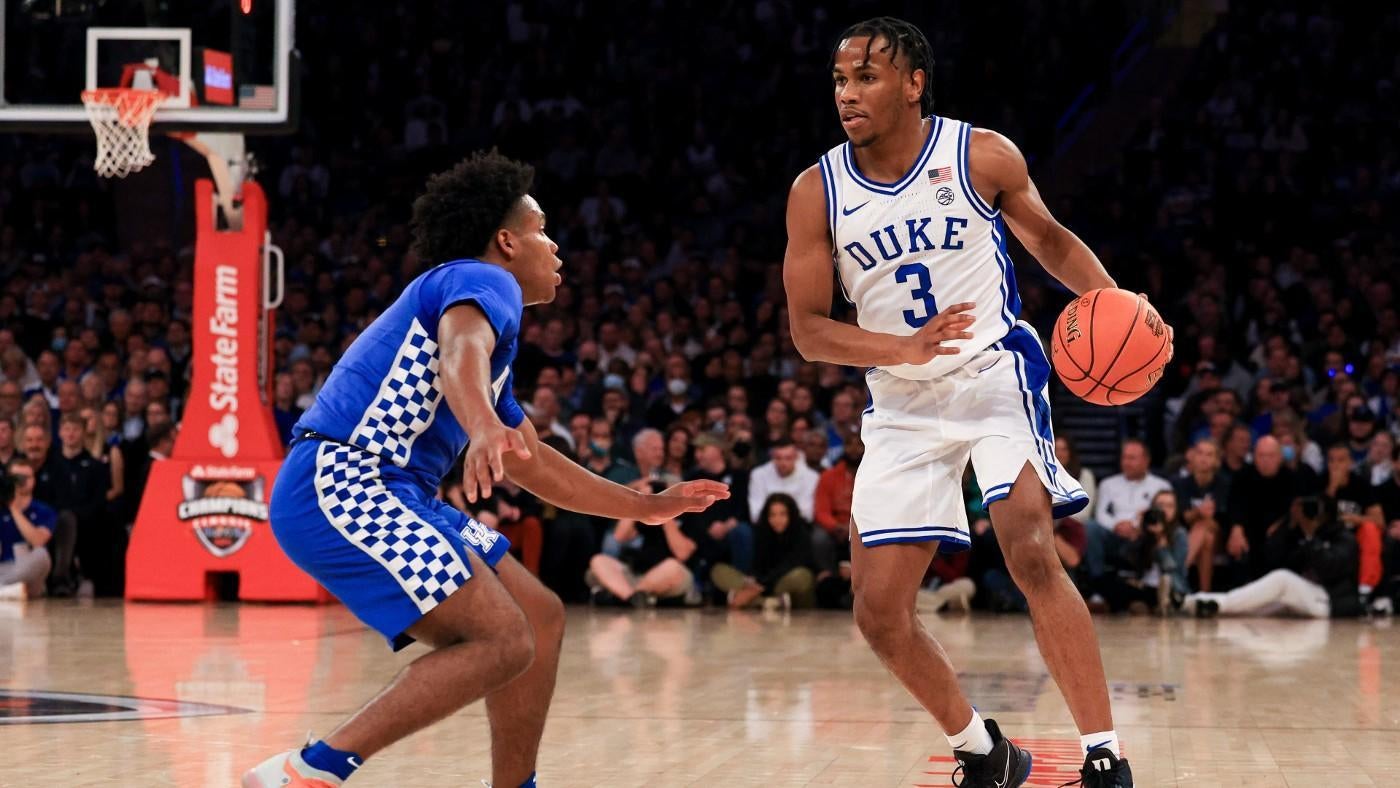 On the heels of a win over the Tar Heels in the 2022 NCAA Championship, Kansas — led by a Hall of Famer in Bill Self and a stacked, veteran-laden returning roster — opened at Caesars Sportsbook as the betting favorite to again cut down the nets and repeat in 2023. But as the summer months have slowly turned to fall, a new favorite has emerged to supplant KU as the favorite to take it all, with Kentucky now at the top of the odds board as the season lurks in the shadows.

Kentucky had a disappointing finish to its 2021-22 season, losing to NCAA Tournament Cinderella story Saint Peter’s in a stunning first-round loss. The offseason has been very kind to UK, though. Not only did reigning national player of the year, Oscar Tshiebwe, return for another run, coach John Calipari has plugged holes in the roster in a big way by adding shooting with transfer Antonio Reeves, defense and lottery talent in Cason Wallace and Chris Livingston, and more frontcourt depth in Ugonna Kingsley Onyenso. The Wildcats’ undefeated run in the Bahamas in which they throttled their competition this summer may be a preview for what lies ahead. At 8-1, they’re a worthy preseason favorite largely because of their returning experience and their ability to seemingly address points of weaknesses from last season.

However, challengers abound in the wings to potentially unseat UK as the preseason frontrunner. Nine teams have odds at +2000 or better at Caesars Sportsbook. Five of them have 15-1 or better odds. Two of them — North Carolina and Gonzaga — are narrowly behind UK in the odds at 9-1. It’s clear that while Kentucky holds the claim as the favorite, it is by a narrow margin.

That validates what I expect as we gear up for next season: the race for the title is wide-open. Some teams have better chances than others, of course, but the randomness of the NCAA Tournament and the unknowns about what teams will look like in live action can throw any expected balance off kilter. In reality, there’s a whole lot of teams that could be better — or worse — than the odds suggest.

So let’s break down the odds as they stand now with some of the best and worst bets as I see them.

Houston went 32-6 last season and could be an even more lethal force in 2022. Marcus Sasser emanates First Team All-Badass vibes, and after his last season was cut short, he could be on a collision course with stardom based upon how strong an offseason he’s said to have had. Combine that with the acumen of Kelvin and Kellen Sampson and the addition of five-star Jarace Walker, and you’ve got a scrappy squad set to outperform expectations — even with those expectations being high.

The injury and subsequent surgery on the foot of five-star freshman Dariq Whitehead — the No. 2 overall player in his class — puts a dent into the prospects of what Duke will look like early in the season in the first season under new coach Jon Scheyer. But at 18-1 that feels baked in — and maybe too baked in — here at the cost. It’s impossible to ignore just how talented a roster Scheyer will be working with this season. Whitehead isn’t even the highest-rated signee — that belongs to No. 1 recruit Dereck Lively II — as part of a No. 1 recruiting class that should easily be considered one of only a handful of true contenders next year.

What if I told you that a team that ranked top-10 in postseason play last year and outperformed three of the four No. 1 seeds in that span (according to BartTorvik.com data) could be 30-1 this preseason to win it all?  Interesting, right? Then, what if I told you that team returns five of its top seven scorers, adds an elite transfer in Baylor Scheierman and has a rising star in Trey Alexander? You’d definitely be in, no? Of course you would be! Creighton is one of the better preseason bets on the board. They fall nearly into “sleeper” territory when, in reality, I think the Bluejays are just straight-up contenders with a top-10 roster entering next season. I’m all in.

Michigan is 28-1 to win it all. Michigan State is 60-1 to win it all. I 100% see these teams differently than Vegas. The Spartans will win more games and have a better team than the Wolverines this season. This is a classic case of overlook-ism of a great in Tom Izzo, who quietly returns a lot of experience and has a solid top-to-bottom roster. Give me Michigan State at 60-1 every single day, especially with Michigan’s odds at 28-1 so inflated. Vegas has those teams backwards.

Kansas should have a good team this season. Maybe a great one, with enough pieces to defend its crown. But . . . are we sure they’re going to be playing in the postseason? Like, we’re positive? I’m not sold. Its NCAA case has strung out for years but at some point they’ll be punished, and a postseason ban seems like a very realistic punishment it could face. So for those reasons I think I’d just stay away from KU. No team has gone back-to-back since the great Florida teams under Billy Donovan in the early 2000s, and I don’t think KU quite has the juice to do it this season after losing two first-round talents and facing the likely distraction of the looming NCAA cloud.

I really like the odds for Arizona to win the Pac-12 (22-1 at Caesars), but I can’t quite get down with its odds of winning it all. At 20-1 it’s just a tad rich after losing Dalen Terry and Bennedict Mathurin to the first round and Christian Koloko, one of the best defensive bigs in college hoops, to the second round of the draft. Second-year coach Tommy Lloyd will have the Wildcats competitive and relevant with Azuolas Tubelis, Kerr Krissa and others returning to join forces with transfer Courtney Ramey and five-star freshman Kylan Boswell. It just feels like there are too many unknowns with this team — similar to how I viewed Texas and its overhauled roster last season — to really have confidence in them as a true contender.

I was [puts on humble brag hat] very in on Auburn way earlier than most last season. Loved the idea of Jabari Smith and Walker Kessler in the same backcourt and thought it could be special. The Tigers then made me look smarter than I actually am, eventually earning a No. 2 seed after a strong season (though it ended in disappointing fashion). This year, though, I’m here to put a wet blanket on Auburn futures. Just don’t love them this season. Kessler and Smith gone is a huge loss. Johni Broome will be a force but the incoming talent just won’t quite be enough to help keep Auburn on the same level it was last season. At 50-1 I’d much rather take fliers on Alabama at the same cost or even Michigan State at 60-1.

Ohio State lost a lot of talent to the NBA, but brings in multiple top-75 freshmen AND Bronny James may loom on the horizon. Listen below for the latest in our Summer Shootaround series and subscribe to the Eye on College Basketball podcast where we take you beyond the hardwood with insider information and instant reactions.