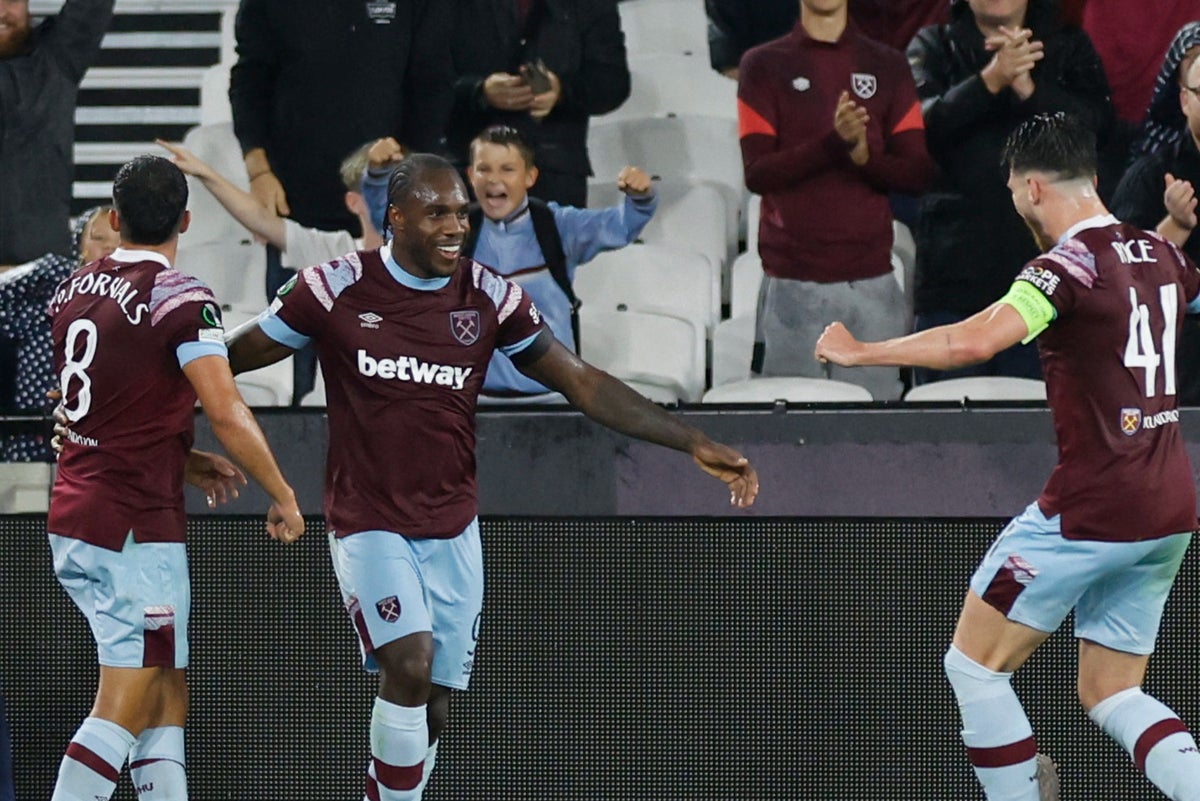 t was duck-to-water stuff as West Ham began their maiden European group stage campaign with a win away in Zagreb a year ago and, despite a sluggish first-half, life in the Europa Conference League is underway in similarly pleasing fashion after a 3-1 comeback win over Romanian side FCSB.

The Hammers trailed at the break, but David Moyes’ triple substitution proved the turning point as the introductions of Michail Antonio, Lucas Paqueta and Bowen lifted what had been a flat performance in unsurprisingly subdued circumstances.

The London Stadium sits inside the Queen Elizabeth Olympic Park and news of the passing of Britain’s longest reigning monarch had broken only 90 minutes before kick-off. Discussions took place with Uefa and the FA over a possible postponement, but it was agreed the fixture would go ahead as planned due to safety concerns, given the number of fans already in the stadium and surrounding area.

A scheduled minute’s silence ahead of kick-off turned into several of applause, joined in by the 3,000 travelling Romanian supporters. At half-time, there were pictures on the big screens of Her Majesty presenting England captain Bobby Moore with the World Cup in 1966, 64 years exactly after the legendary defender made his debut for this club. And both before kick-off and moments before the final whistle there were impromptu renditions of the national anthem.

On the field, whether as a show of annoyance with his side’s first-half display, or in the growing realisation that their Premier League clash with Newcastle is unlikely to go ahead this weekend, Moyes sent on his trio of attacking stars in the hope of inspiring a swift turnaround and they delivered.

Paqueta looked equal parts slick and steely, as he had on full debut at Stamford Bridge, while Antonio scored for the second time in as many games to clinch the three points late on.

But it will have been Bowen’s cameo after a slow start to the season that gives Moyes most cause for optimism. Similar to the debate around Heung-min Son’s lack of form at Tottenham, Bowen’s underwhelming displays have been a major cause of concern in the opening week’s of the season but, like Son, the winger has ample credit in the bank after his stunning displays last term and showed signs here that he is now ready to go up through the gears.

As well as his superbly-take penalty, which came about in slightly dubious fashion after Maxwel Cornet had collided with visiting goalkeeper Daniel Vlad in the air, the Englishman was close to getting on the end of Lucas Paqueta’s low cross, could not quite adjust his feet in time to tap-in Antonio’s rebound and might have had an assist after finding Pablo Fornals with a fine pull-back.

Moyes had used the qualifying tie against Viborg to get a first look at some of his summer signings and continued his fact-finding mission here by handing six of them starts, with only record arrival Paqueta and the injured Nayef Aguerd missing from the lineup.

There were encouraging displays among them, particularly from Gianluca Scamacca, who linked the play nicely and looked sharp in his 45 minutes, despite having missed much of the last two weeks of training through illness, though he did drag the Hammers’ best chance of the first-half tamely wide.

Flynn Downes, finally given a proper chance to impress for the first time since joining from Swansea, acquitted himself well, too, living up to his ‘one of our own’ billing with a couple of crowd-pleasing crunchers, and showed little desire to get ahead of the play, meaning Declan Rice’s forward forays did not leave the Hammers exposed, as one had in the draw with Tottenham a week ago.

Where Moyes will have learned little new, however, was in the case of Emerson Palmieri. The full-back’s well-established defensive limitations were exposed when, having been caught under a high cross only minutes earlier, the Italian failed to learn his lesson was dragged too far inside and left ball-watching as Andrei Cornea stole in unmarked at the back post to open the scoring.

The former Chelsea man, however, proved his attacking qualities once more with the high cross that led to Bowen’s equaliser from the penalty spot and then the driven finish that put the Hammers ahead.

Emerson does not sense danger well enough to be relied upon in a back-four against better opposition, particularly without the covering pace of Kurt Zouma inside him, but can provide Moyes with tactical flexibility and a fine creative outlet at wing-back.

Swiatek vs Sabalenka live stream: how to watch US Open tennis semi-final online from anywhere