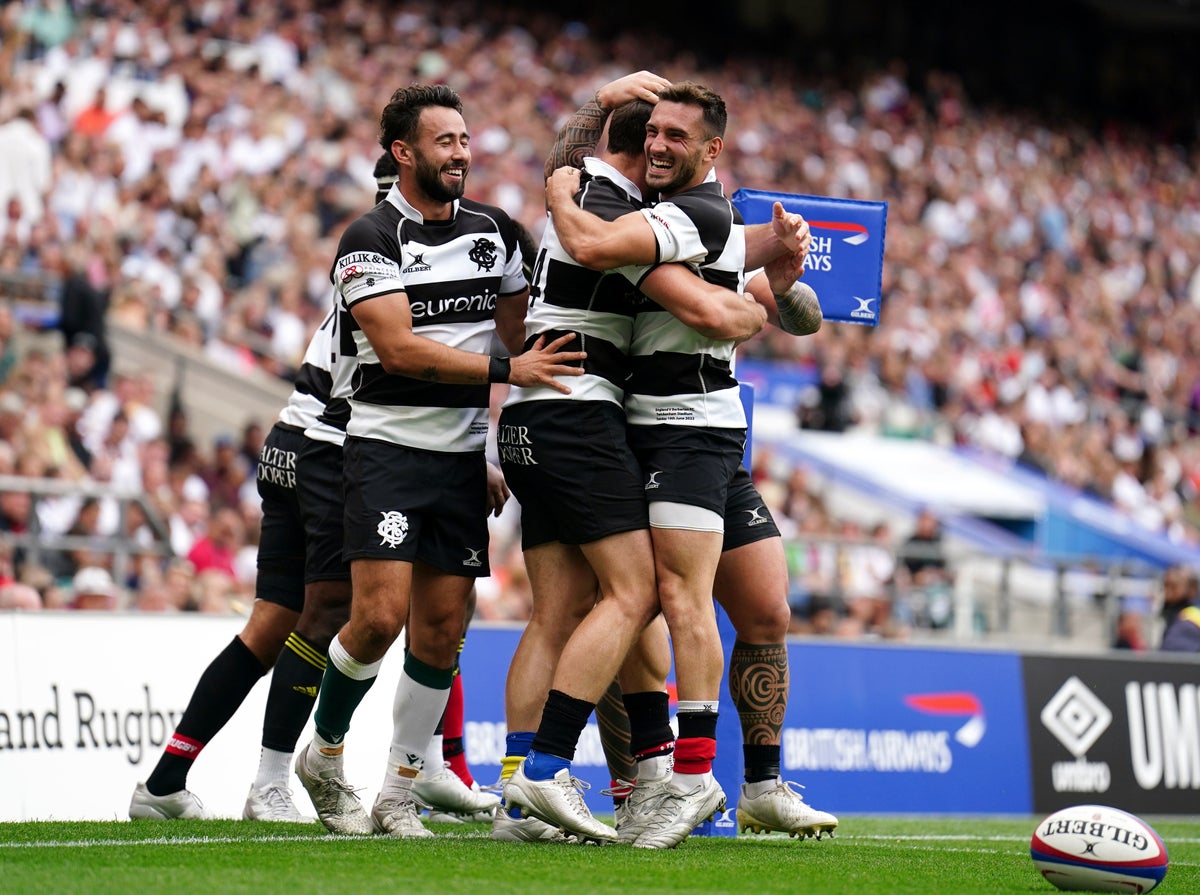 ngland produced a worryingly poor performance ahead of their tour of Australia as they were beaten 52-21 by the Barbarians at Twickenham.

Eddie Jones’ side played 44 minutes with an extra man, after Will Skelton was shown a red card, but the Baa Baas, who had a number of France’s winning Six Nations squad in their ranks, ran riot for much of the second-half.

A penalty try got the Barbarians up and running and seven more followed, with Damian Penaud going over twice and Charles Ollivon, Baptiste Couilloud, Louis Carbonel, Max Spring and Antoine Hastoy all touching down as well. On his final professional appearance, George Kruis, who won 45 England caps, knocked over three conversions, including an outrageous backheeled effort.

In between those tries there were some moments of encouragement for England, who went over three times through Joe Cokanasiga, Jonny May and Marcus Smith, but overall it was an afternoon to forget.

Jones will name his squad to travel to Australia on Monday, ahead of a three-Test tour that gets underway on July 2.

It was a largely low-key start to a fixtures that traditionally brings entertaining, and slightly chaotic, rugby. The scoreboard was not troubled for the opening 17 minutes, when Smith then sent a penalty over.

That got things rolling and the Barbarians got themselves up and running midway through the half, as Jonny May was sent to the sin-bin for a deliberate knock-on out wide and the Baa Baas were awarded a penalty try.

Another gift came four minutes later when Barbarians captain Ollivon intercepted a loose pass and he just about had enough pace in the tank to run the length of the England half and ground the ball under pressure from Harry Randall to make it 14-3.

The home side cut that deficit when Cokanasiga stretched over the line after good work from Tommy Freeman and it got worse for the Baa Baas as replays of an incident in the build-up resulted in Skelton seeing red for a high hit in the build-up.

England were in a generous mood once more just before half-time though, as Mark Atkinson passed it straight to Penaud deep in the 22 and the Frenchman went over for a simple try.

Brilliant work from Yoan Tanga after the break saw him stopped just before the tryline, but Couilloud was ready and waiting to go over for the Baa Baas’ fourth try.

May went some way to making up for his earlier trip to the sin-bin as he was found out wide by Smith and then skipped inside to go over a relatively simple finish, reducting the deficit to 26-16.

But that lead was moved to 15 points again when Penaud produced a stunning finish out wide, a TMO review deeming he had just about kept his boot in touch under pressure.

The man advantage told on the hour mark as the Baa Baas defended on their tryline, leaving space out wide for Smith to jog over, though another poor kick from the fly-half meant he failed to add the extras.

On the whole it was a very professional performance from the Barbarians but there was a glimpse of the traditional flair when Nolann Le Garrec flicked a kick over the top and Louis Carbonel provided the finish.

The style was well and truly turned on as Spring went over following another stunning kick from Le Garrec, though that was made to look distinctly average when Kruis backheeled a conversion over from in front of the posts.

Hastoy capped a sensational Baa Baas display in the dying seconds, as Kruis made his way through his cheering teammates to notch up a hat-trick of conversions, those six points the most he has ever managed in a match.

A party atmosphere in the sunshine for the Barbarians, whose enjoyment of the 80 minutes was surely matched by Australia who get their crack at England in two weeks’ time.