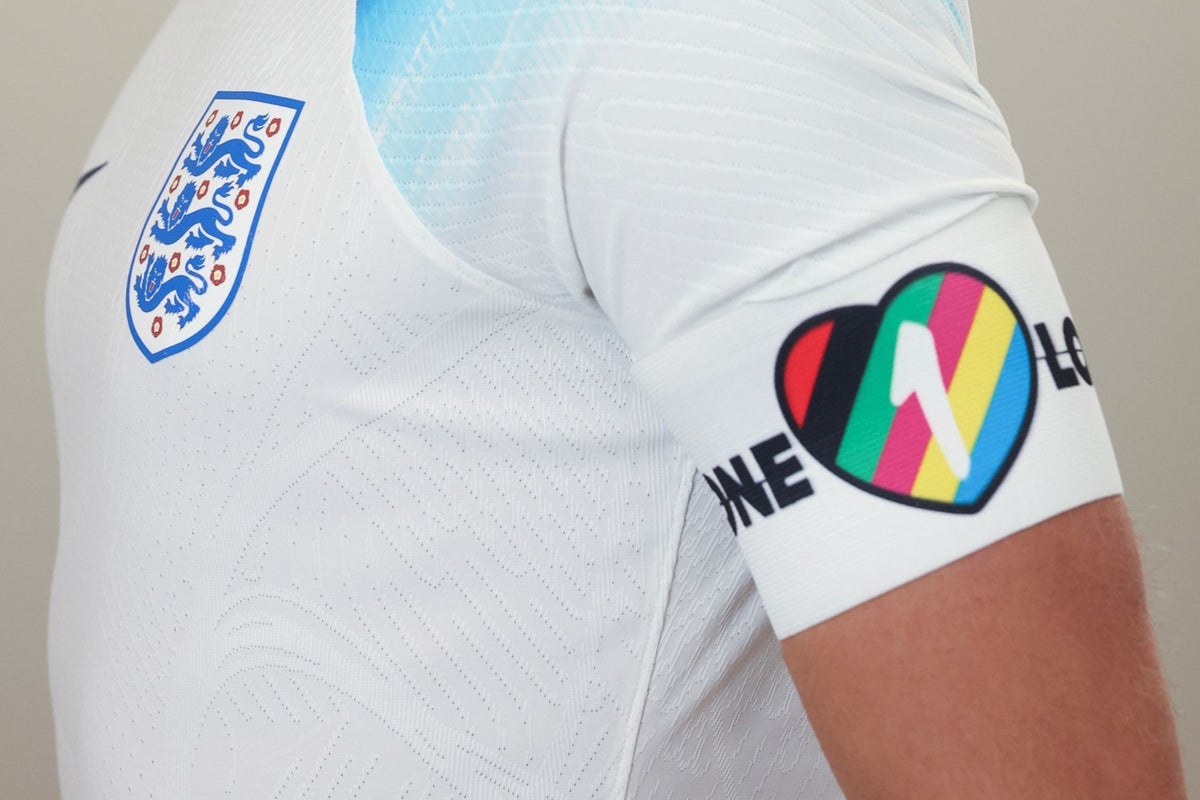 ngland’s Harry Kane will be among the national team captains sporting a distinctive anti-discrimination armband before and during the World Cup in Qatar.

Kane and his fellow national team captains will show their support for the campaign by wearing a special ‘OneLove’ armband that features a multi-coloured heart at its centre.

He will begin doing so in Friday’s key Nations League clash with Italy in Milan, during which England’s players will also be wearing black armbands in tribute to the late Queen Elizabeth II.

Captains of those respective nations that have qualified for the World Cup will continue to don the ‘OneLove’ armbands in Qatar, a country where same-sex relationships are criminalised.

England’s Harry Kane wearing a OneLove captain’s armband. Kane and the captains of the eight other countries who have qualified for the World Cup will wear the OneLove armband in Qatar

“I am honoured to join my fellow national team captains in supporting the important OneLove campaign,” Kane said. “As captains we may all be competing against each other on the pitch, but we stand together against all forms of discrimination.

“This is even more relevant at a time when division is common in society. Wearing the armband together on behalf of our teams will send a clear message when the world is watching.”

In addition to joining the OneLove anti-discrimination campaign, the Football Association (FA) said they have also lobbied FIFA for an urgent update on the progress of a centre in Qatar to support migrant workers as well as a compensation fund for the families of those who have died or been injured in construction projects.

The England squad have also invited migrant workers to their World Cup training base in Al Wakrah in order to engage with players, while the FA also said that they continue to request more details on assurances received from the World Cup organising committee that all fans, including those from LGBTQ+ communities, will be welcome in Qatar.

“We’re coming together as a group to wear the OneLove armband until the end of the season as a visible show of support for inclusion in football – something we strongly believe in and have consistently supported,” said FA chief executive Mark Bullingham.

“Along with the other members of the UEFA Working Group on Human rights, we’re pushing FIFA for an update on the concept of a Migrant Workers’ Centre in Qatar, to provide advice and help for migrant workers. It’s clear that Qatar has brought in progressive legislation in the last few years to give workers rights, so this concept will help this legislation to take effect. We have met a variety of workers in Qatar on our visits to the country and whilst they recognise the substantial progress there are areas in which further support would make a huge difference.

“We continue to push for the principle of compensation for the families of migrant workers who have lost their lives or have been injured in construction projects. Again, we are pushing FIFA for an update on the compensation fund which has been consistently referenced as a safety net where workers and their families have been unable to secure compensation from the construction companies.”