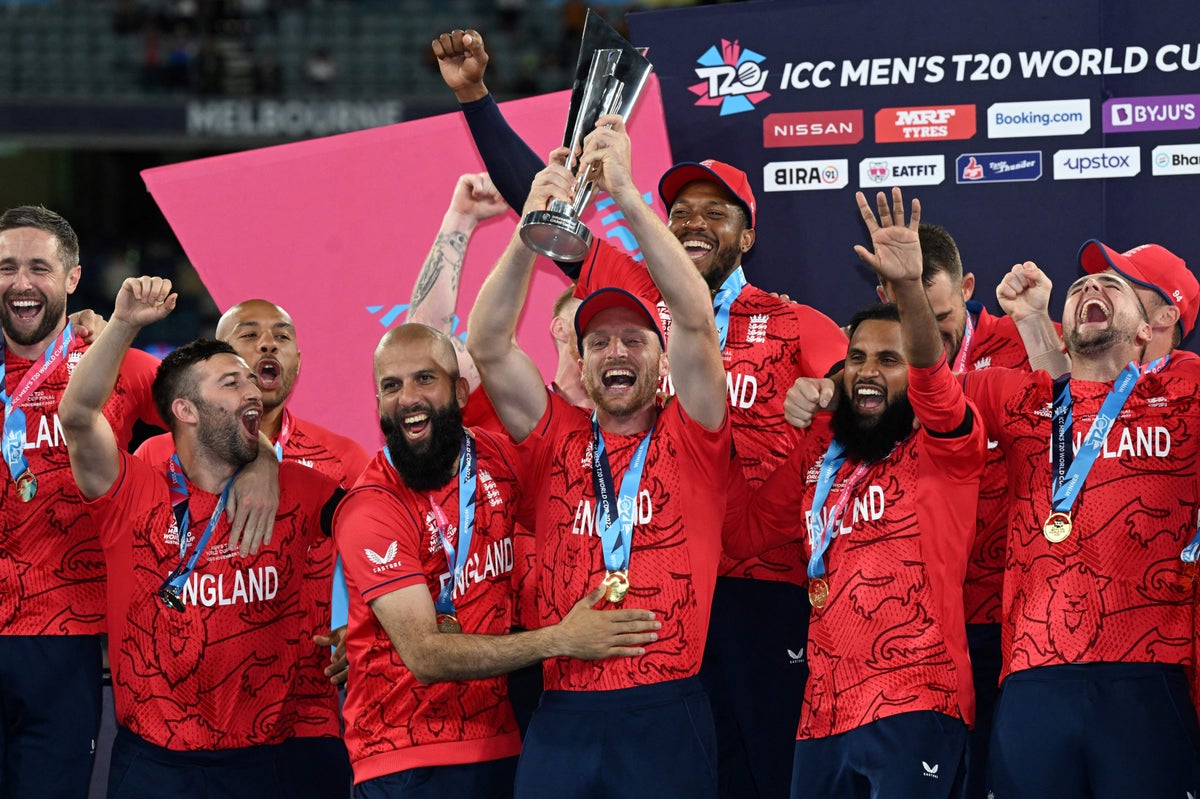 en Stokes and the big occasion. The man’s bottle knows no bounds.

The hero of Lord’s and Headingley in 2019 came up trumps for England again, this time in Melbourne, where Jos Buttler’s side beat Pakistan by five-wickets to win the T20 World Cup for the second time.

In the process, England become the first men’s team to hold both 50-over and T20 world titles at the same time, Stokes’ unbeaten 52 off 49 guiding them home with an over to spare after sensational bowling performances from Sam Curran, who was named player of the tournament, and Adil Rashid had restricted Pakistan to 137 for eight.

For Buttler, this was a special triumph, his first as captain having played such a key part in the 2019 50-over success from within the ranks under Eoin Morgan. He and new head coach Matthew Mott – who has added a men’s world title to his plethora of global medals with Australia’s women – endured a shaky start during a transitional summer but have turned England’s form around, helped by the return to the side of Test skipper Stokes.

Stokes’ half-century was, remarkably, his first in T20 international cricket and came after England had wobbled, losing top order wickets and slowing in their chase on what was a tricky surface at the MCG.

Edging towards a tense finish, the game turned in the 16th over, which England began on 97 for four, still needing 41 from 30 balls.

That became 97 for five when Harry Brook fell first ball, brilliantly pouched in the deep by Shaheen Shah Afridi, but the wicket came at a cost, the big quick hurting his knee as he slid in to take the catch. Pakistan were relying on the seamer for two more overs at the death – he would manage just one more ball.

Iftikhar Ahmed was handed the unenviable task of picking up the slack and Stokes sensed an opening, driving for four and then lifting six over long-off to suddenly put England in charge.

Moeen Ali, who played a crucial cameo of 19 off 12, took three boundaries off the following over and the game was as good as up. Fittingly, Stokes hit the winning runs, six years after Carlos Brathwaite had launched 24 of them for the West Indies off his bowling in Kolkata.

That there was a game on at all was something of a surprise. La Nina has plagued this tournament but, as for the incredible group stage clash between India and Pakistan, the forecasts proved wrong as the weather gods smiled on Melbourne.

England won the toss and, unsurprisingly given the threat of rain, chose to bowl. Stokes began in nervy fashion with a no-ball, but England made steady inroads, star opener Mohammad Rizwan becoming the first of Curran’s three victims as he chopped on for 15.

Curran finished with magnificent figures of 3-12, capping a maiden international tournament that began with five-for against Afghanistan and finished with 13 wickets.

Rashid, whose own start to the tournament had been quiet before producing phenomenal spells in both the semi-final and must-win group game against Sri Lanka, repeated the trick, taking 2-22 including the key scalp of Babar Azam.

Chris Jordan, who kept his place with Mark Wood not fit to return, again bowled well at the death alongside Curran and finished with two wickets of his own.

As with Wood, Dawid Malan lost his race to prove his fitness, meaning a World Cup final berth for Phil Salt, who had not even had chance to bat in the ten-wicket demolition of India on Thursday.

Salt was in early here as a beauty from Afridi cleaned up Alex Hales at the end of the first over, but did not last long, clubbing Haris Rauf straight to midwicket, while Buttler – who looked the most fluent batter on either side – made a smooth 26 off 17 before edging behind off the same bowler.

And so, as somehow always seems to be the way, it fell to Stokes. He never found much rhythm and at times lived a charmed life against the excellent, luckless Naseem Shah, but was always determined to be there at the end.

When he is, there is usually only one outcome.