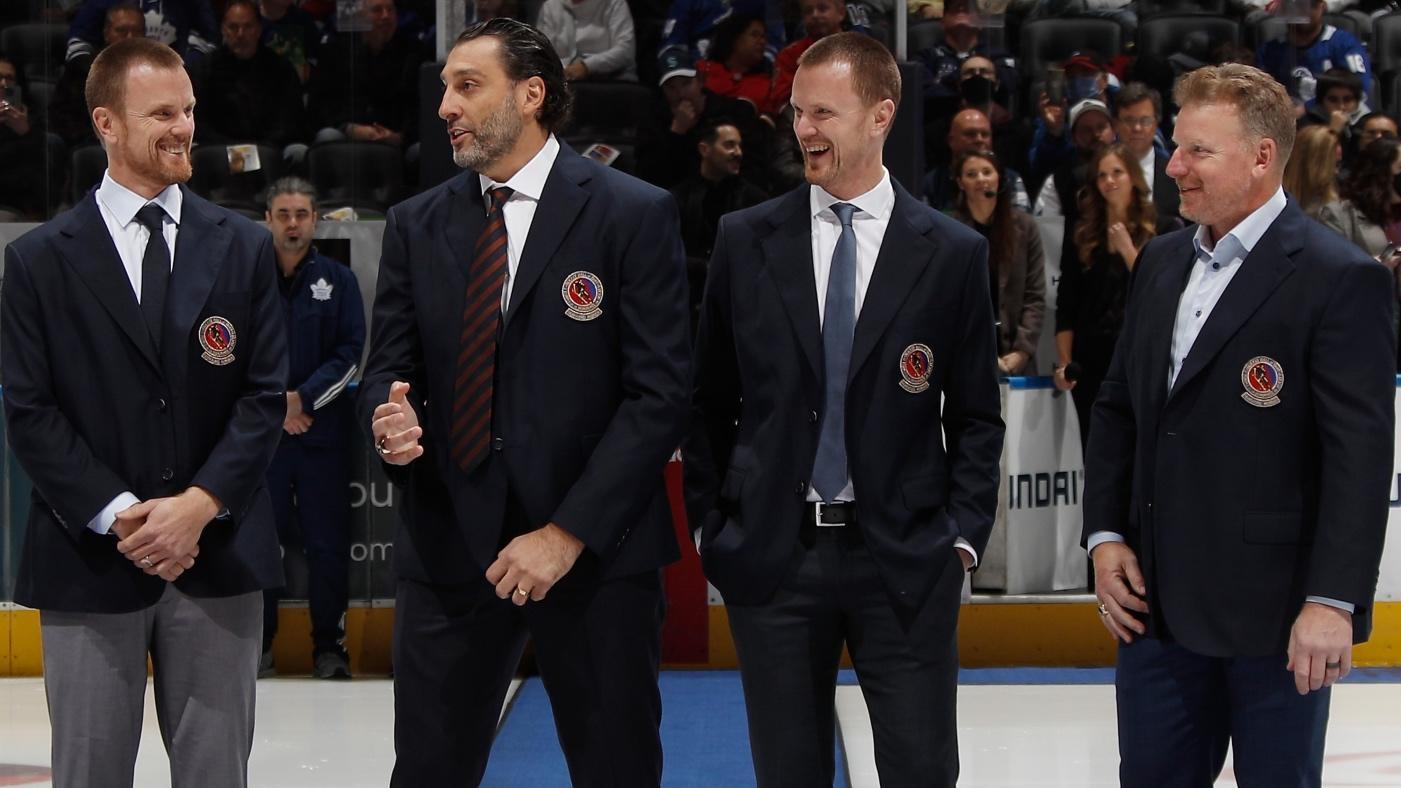 The Hockey Hall of Fame has inducted its class of 2022, with a trio of former Vancouver Canucks taking center stage. Henrik Sedin, Daniel Sedin, Roberto Luongo, Daniel Alfredsson, Riikka Sallinen, and Herb Carnegie were all immortalized in the Hall of Fame over the weekend.

In the 1999 NHL Draft, the Canucks selected Daniel and Henrik Sedin with the No. 2 and No. 3 overall picks, respectively. Those proved to be two of the best decisions the team has ever made. The Sedin twins led the Canucks to some of the best seasons in franchise history, and they both sit atop the club’s record book.

Henrik, known for his elite vision and passing ability, holds the Canucks’ all-time records for assists (830) and points (1,070). Daniel, who was on the receiving end of many of those assists, holds the franchise record for goals with 393.

Henrik joked that he could have piled up goals too, if Daniel hadn’t been around to steal his thunder.

“I missed 30 games in my career and Danny’s production was not the same,” Sedin said, according to the Associated Press. “In 2010, Danny missed 20 games … I had 11 goals and nine assists.

“With Daniel I was barely a 20-goal scorer. Without him I would have been a career 45-goal scorer.”

The Sedin twins weren’t the only legendary Canucks to reach the Hall of Fame last weekend. Luongo, one of the best goaltenders in NHL history, played with the Sedins in Vancouver for eight seasons.

When he got the news that he would be inducted into the Hall of Fame, Luongo immediately wanted to know if the Sedin twins would be there with him.

“Wanted it so bad,” Luongo said, via the AP. “Proud to say that I played with you guys.”

Luongo was originally drafted by the New York Islanders in 1997, but he was traded to the Florida Panthers after his rookie year. In total, Luongo played 11 seasons with Florida, eight with Vancouver, and one with the Islanders. His career stat line includes a .919 save percentage and a 2.61 goals against average.

Alfredsson didn’t have the same draft pedigree as the Sedins or Luongo. He was a sixth-round pick by the Ottawa Senators in 1994, and they got quite a steal. Alfredsson went on to play 1,178 games for Ottawa, and he owns the franchise records for goals (426), assists (682), and points (1,108). He played 17 seasons for the Senators before finishing his career with the Detroit Red Wings in 2013-14.

Sallinen is a legend for the Finnish women’s hockey program. She had a long and prolific career at the international level, which ranged from the 1989 European Championships to the 2019 World Championship. In 81 international games, Sallinen notched 63 goals, 59 assists, and 123 points. Sallinen helped Finland win a pair of bronze medals in her four Olympic appearances.

Carnegie, who died in 2012, was inducted as a builder. Carnegie was of Jamaican descent and spent his career in the Quebec Provincial League and the Quebec Senior Hockey League. He did get a tryout with the New York Rangers in 1948, 10 years before Willie O’Ree became the first Black player to enter the NHL. Carnegie was never able allowed to play in the NHL, but he began the Future Aces Hockey School in his retirement and tried to bring diversity to the sport. Carnegie’s daughter Bernice was in attendance on his behalf.

Where to find Wattrel in Pokemon Scarlet and violet