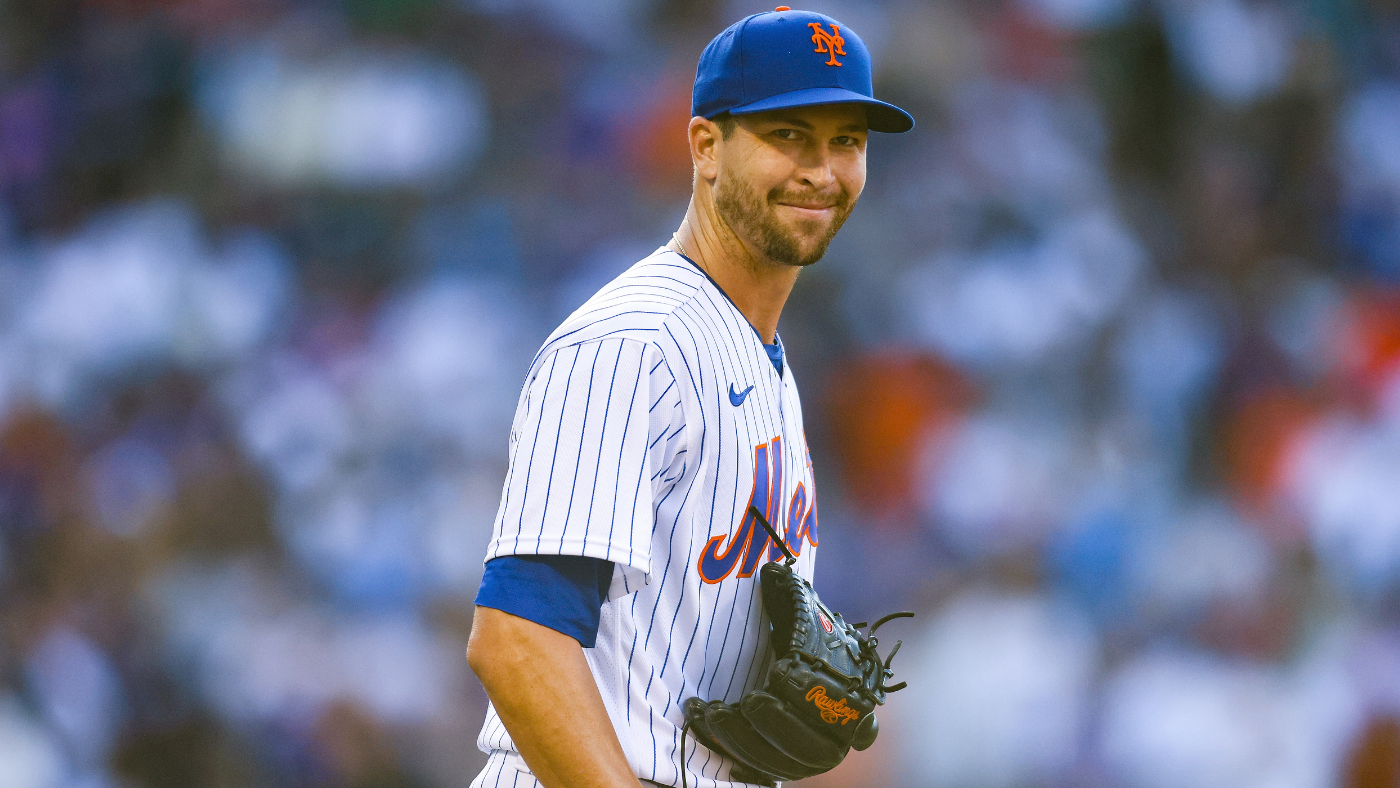 It is sort of amazing that a two-time Cy Young award winner, a pitcher with a 2.05 ERA and 876 strikeouts in his last 645 1/3 innings, is a free agent and there isn’t more buzz about him. The World Series ended two weeks ago and the hot stove has been frigid with regard to Jacob deGrom, though, to be fair, that is true of most top free agents right now.

“I haven’t really thought about it,” deGrom said about his free agency after the New York Mets lost Game 3 of the Wild Card Series (video). “It’s disappointing that we lost tonight. That was the goal, to move on. The plan was to be going to (Los Angeles for the NLDS), and that’s not what we’re doing, so I haven’t really thought about it right now.”

DeGrom, now 34, opted out of the final year and $32.5 million remaining on his contract with the Mets after the season. He figures to seek a contract similar to Max Scherzer’s, meaning a three-year pact worth more than $40 million per season. Of course, injuries limited deGrom to only 11 starts in 2022 and 15 starts in 2021. That said, on a per-inning basis, he’s as good as it gets.

It reads oddly given deGrom’s excellent track record, but he might be the biggest risk-reward proposition in the class. He’s been one of the best pitchers in the sport since he debuted in 2014, of course, amassing two Cy Young Awards and four All-Star Games appearances along the way. There’s no questioning his legacy, or his ability to throw a baseball with great efficacy when he’s healthy — therein lies the rub: how often will he be healthy heading forward? Injuries have limited deGrom to 26 starts over the last two seasons, and he’s now a half-year shy of turning 35. Pitchers do not tend to stay healthier as they age. Seeing as how deGrom opted out of a one-year pact that would have paid him $32.5 million, it’s likely that he’s seeking a deal with an AAV closer to the $43 million Max Scherzer received last winter. Someone will undoubtedly pony up for a chance at adding a bonafide ace to their rotation, but they may end up experiencing buyer’s remorse if deGrom’s body continues to fail to comply.

Needless to say, every single team would benefit from adding deGrom to their rotation, though some are far more likely to pursue him than others. His salary demands will limit his market somewhat, plus deGrom figures to prioritize contenders over rebuilding teams. At 34, deGrom has accomplished everything a player could dream of accomplishing in this game except winning a World Series. Having a shot at a championship will be a priority.

These 10 clubs are either too far away from contending and/or too far away from running the kind of payroll necessary to sign deGrom and surround him with a strong supporting cast while he’s at the height of his powers. Would deGrom make these teams better? Undoubtedly, but add deGrom to the A’s and they become what, a 95-loss team instead of a 102-loss team? The AL Central champion Guardians had a $68 million payroll in 2022. Are they ponying up for deGrom? Nah. These 10 clubs aren’t in the best position to splurge for a top-of-the-line arm, either in the standings or financially.

The Rays seem to be the runner-up for a big name every offseason (last winter it was Freddie Freeman) and I’m sure it’ll happen again this offseason, either with deGrom or someone else. Bottom line, there’s no reason — zero — to believe they will spend what’s necessary to sign him. Same with the Brewers, who are more likely to give those dollars to one of their aces (Corbin Burnes and Brandon Woodruff, who are both two years away from free agency) than import another ace.

I can’t come up with a good reason for the White Sox and Orioles to not sign deGrom. Chicago should want to erase the memory of its disappointing 2022 season and the AL Central is extremely winnable. Add deGrom to the White Sox and they’re again division favorites. The problem is owner Jerry Reinsdorf is always disinclined to spend big. When in doubt, bet against Reinsdorf opening the wallet for a marquee addition (this also applies to the other sports team he owns, by the way).

The Orioles took a massive step forward this season and are transitioning from rebuilder to contender, and part of that transition is (or should be, anyway) raising payroll and supplementing the homegrown core with high-end talent. It doesn’t get much more high-end than deGrom and it wouldn’t require a long-term contract. That said, I’m going to need to see GM Mike Elias do something like this to believe it. Perhaps I’m wrong and have the O’s too low. I’m comfortable with them here right now.

Replacing 40-year-old Justin Verlander with 34-year-old deGrom is sensible from a “who’s likely to be better the next 2-3 years” perspective, though the Astros seem disinclined to spend significantly to add to their rotation. Even without Verlander they have six starters for five rotation spots: Hunter Brown, Luis Garcia, Cristian Javier, Lance McCullers Jr., José Urquidy, and Framber Valdez. The rotation is not a priority right now, but never say never with the defending World Series champions.

Would the Angels add a fourth $30-plus-million player to the books? Would the Mariners make a third significant rotation addition within a calendar year? Sure, why not. The Twins and Red Sox badly need rotation help and Minnesota showed us the club is willing to give out a short-term, high-dollar deal with Carlos Correa last offseason. I see no good reason for the Twins to be out on deGrom. The Red Sox need to figure out what they’re doing with Xander Bogaerts and Rafael Devers, but chief baseball office Chaim Bloom can presumably do two things at once. Boston can add deGrom while still getting its franchise infielders situated.

Tier 4: You can make the case

Imagine the defending NL champion Phillies stealing deGrom away from the Mets. That would be something. Padres GM AJ Preller loves to make big, seemingly impossible moves, and I wouldn’t rule him out on anything. The Yankees have to get Aaron Judge re-signed first and foremost, but a big money short-term deal to pair deGrom with Gerrit Cole would be tempting. The Blue Jays have money to spend and a need in the rotation with Ross Stripling a free agent and Hyun-Jin Ryu likely to miss 2023 with Tommy John surgery. It there a good reason for Toronto to pass on deGrom? No. No there is not.

The Giants and Cubs are in a difference place than those other four teams. They missed the postseason in 2022 and have money to spend — a lot of it — this offseason. San Francisco has been connected to Judge in the early days of the offseason and Chicago to Correa and the other top shortstops. I don’t get the sense pitching is the tippy-top priority for either team, but they both have money to spend, and adding deGrom moves them closer to the postseason not just in 2023, but also 2024.

On paper, the Cardinals have six starters for five rotation spots: Jack Flaherty, Dakota Hudson, Steven Matz, Miles Mikolas, Jordan Montgomery, and Adam Wainwright. Top prospect Matthew Liberatore is available as well after making seven spot starts in 2022. The rotation would not appear to be a priority for St. Louis, but deGrom is better than all those guys, plus Flaherty and Matz have had injury trouble. They could also sign deGrom and trade a starter for help elsewhere on the roster. The Cardinals made a run at Max Scherzer last offseason, and keep in mind Wainwright will retire after 2023 and Flaherty, Mikolas, and Montgomery will all be free agents. DeGrom would boost the rotation in 2023 and also serve as a foundational piece in 2024.

The Braves/deGrom connection has existed for a long time now. It dates back to the 2018-19 offseason, when trade rumors swirled because it was unclear whether the Wilpon era Mets would be able to sign their ace to an extension. DeGrom is a free agent now and can be acquired for nothing but cash. Does Atlanta need another starter? Eh, not really. Max Fried, Charlie Morton, Spencer Strider, and Kyle Wright are an excellent front four, plus Mike Soroka is still around and top prospects Bryce Elder and Kyle Muller are as MLB-ready as it gets. Then again, you can always find room for deGrom in your rotation, and when you have your core signed so affordably, you can afford to spend huge on someone like deGrom. There’s also the double whammy component of taking him away from the Mets, Atlanta’s chief NL East rival. Interest in deGrom could depend on Dansby Swanson. If Swanson re-signs, the Braves may be out on another big-money player. If Swanson leaves, then all bets are off.

Clayton Kershaw will return for another season, but Walker Buehler is expected to miss 2023 with his second career Tommy John surgery and Tyler Anderson has already signed with the Angels as a free agent. The Dodgers could use another top flight arm behind Kershaw and Julio Urías, someone to lessen their reliance on Tony Gonsolin and also Dustin May in his first full year back from Tommy John surgery. The Dodgers offered Bryce Harper a four-year, $180 million contract when he was a free agent, so they’re willing to do a short-term deal at huge dollars. DeGrom is right up their alley then, and the need is there.

The Rangers want pitching this offseason, high-end pitching at that, and the recent Jake Odorizzi trade and Martín Pérez re-signing (technically Pérez accepted the qualifying offer) won’t stand in the way of signing deGrom. DeGrom is a natural fit for a pitching needy team that probably wants to avoid another long-term contract after signing Corey Seager and Marcus Semien last offseason. Few teams this offseason have the financial wherewithal and motivation to get a deGrom signing done as much as the Rangers. They are a legitimate suitor and are not to be dismissed just because they lost 94 games in 2022 and haven’t made the postseason in six years.

In the end, the Mets are the best and most logical landing spot for deGrom, and deGrom is the best and most logical free agent for the Mets. DeGrom is a legacy Mets player who could go down as the second best pitcher in franchise history behind Hall of Famer Tom Seaver should he spend the rest of his career in Flushing. The Mets need rotation help — Chris Bassitt and Taijuan Walker are free agents this offseason as well — and owner Steve Cohen can beat any offer without batting an eye. Entering 2022, I thought there was zero chance the Mets would allow deGrom to leave after the season. I admit a reunion no longer feels inevitable, but I still think it is the most likely outcome, and it make sense for both sides.