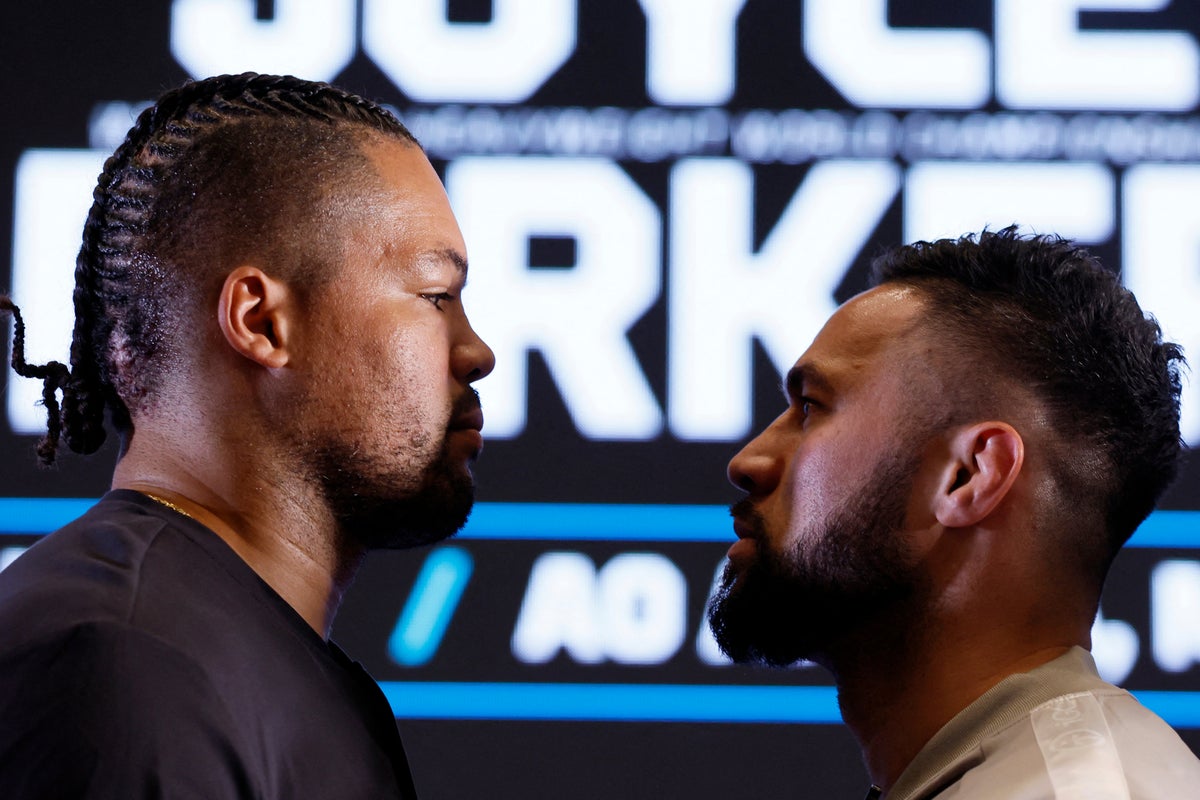 oe Joyce and Joseph Parker go head to head in a hotly-anticipated heavyweight clash in Manchester on Saturday night.

The vacant interim WBO title will be on the line in a high-stakes battle in boxing’s blue-riband division, the winner of which will be a mandatory challenger to unified champion Oleksandr Usyk, whose hopes of becoming undisputed at a second weight class have suffered a blow with fellow title-holder Tyson Fury and Anthony Joshua likely to finally meet in a blockbuster all-British showdown in December.

Time is of the essence for the undefeated Joyce (14-0), who turned 37 this week and needs to kick on once again if he is to realise his long-held world championship ambition.

‘The Juggernaut’ secured a career-best win against Daniel Dubois in November 2020, but that has been followed by far more low-key stoppages of durable veteran Carlos Takam and former European champion Christian Hammer, the latter coming after he had recovered from months out with a serious wrist injury in July.

Parker is a clear step up for Joyce and will himself harbour ambitions of returning to the world title picture. The New Zealander previously reigned as the WBO champion between 2016-18 after edging past Andy Ruiz Jr, defending it successfully against Răzvan Cojanu and Hughie Fury before losing out to Joshua on points in Cardiff.

Parker followed that up with another loss to Dillian Whyte but has rattled off six wins since then, becoming WBO Oriental and Inter-Continental champion, defeating Derek Chisora twice in the span of seven months in Manchester last year.

Joyce vs Parker takes place on Saturday, September 24, 2022 at the AO Arena in Manchester, England.

The main undercard is due to get underway from 7pm BST, with ring walks for the main event expected at approximately 10:30pm.

As ever, timings are subject to change, depending on the length of those undercard bouts.

Chief support in Manchester on Saturday comes in the form of Amanda Serrano, who will look to bounce back from her close, historic defeat by undisputed women’s lightweight champion Katie Taylor at Madison Square Garden as she battles Sarah Mahfoud.

Unified champion Serrano is in possession of the WBC, WBO and IBO featherweight titles, while Mahfoud holds the IBF version at 126lbs.

Elsewhere on an intriguing card, Michael Magnesi defends his IBO super-featherweight title against Anthony Cacace, while there is a British welterweight title contest between Ekow Essuman and Samuel Antwi.

Stoke will turn out in force as usual for Nathan Heaney, who faces Jack Flatley for the IBO international middleweight gold.

How to watch Joyce vs Parker

TV channel: In the UK, Joyce vs Parker is being broadcast live on BT Sport Box Office at a cost of £19.95.

Live stream: Those who have purchased the fight can also watch it online via the BT Sport Box Office app.

Joyce to win via a close split-decision after a bruising, highly-entertaining heavyweight slugfest.

The weigh-in for Saturday night’s main event takes place on Friday afternoon. Check back in then for the results!

Joyce to win by decision/technical decision: 7/5

Parker to win by decision/technical decision: 11/4