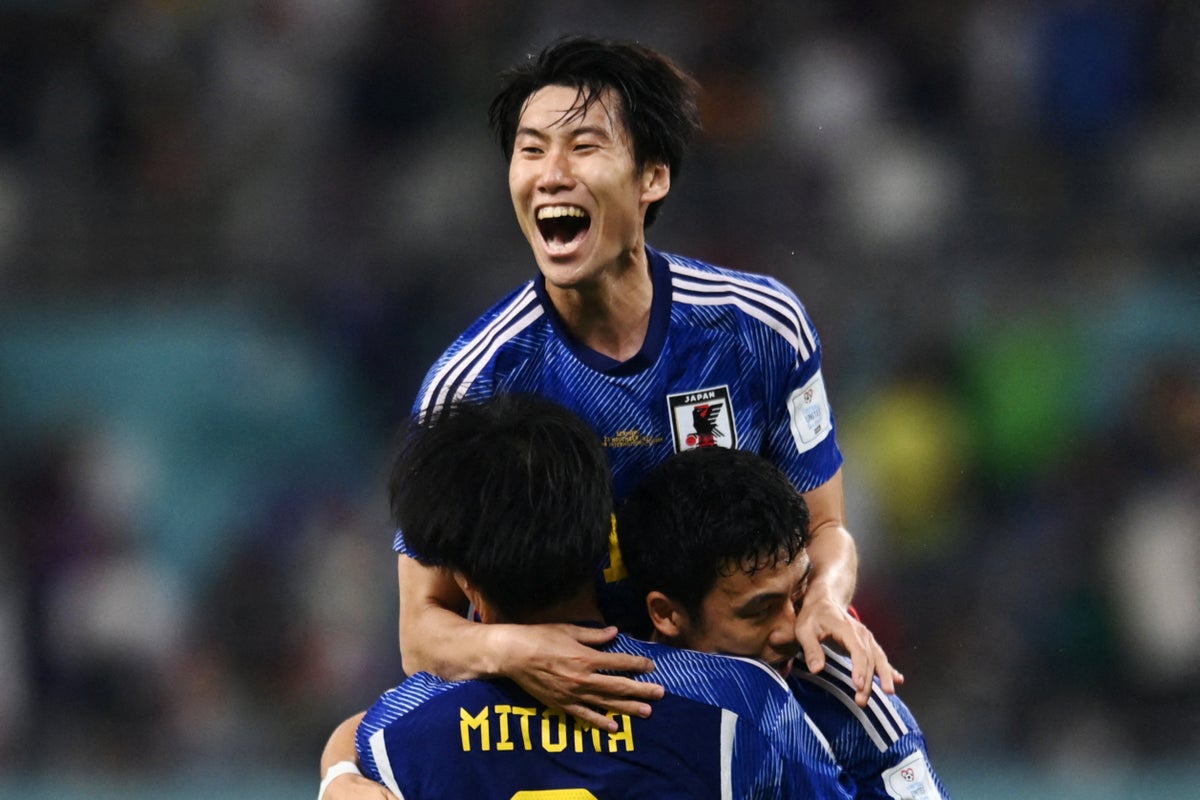 apan’s players revealed they were inspired by Saudi Arabia’s shock triumph over Argentina, after pulling off their own seismic World Cup upset against Germany.

Japanese boss Hajime Moriyasu hailed a “historical moment” in the nation’s football story, as late goals from Ritsu Doan and Takuma Asano saw his side come from behind to beat the four-times winners.

The 2-1 win came 24 hours after Lionel Messi’s Argentina had been humbled by the Saudis in similar fashion — a match Japan’s players watched at their training base.

“Saudi Arabia inspired us a lot,” said Brighton winger Kaoru Mitoma, who called the victory the best moment of his life. “They won the game and we thought we can win too, we can also have a great game.

“Our plan was to draw but, of course, we wanted to win. This game was incredible and we created history. It was unbelievable for me.”

Japan have qualified for every World Cup since making their debut in 1998, but this was their first tournament victory over a country that had won the competition.

Four years ago, Japan came close to reaching the quarter-finals for the first time, leading Belgium 2-0 with 21 minutes to play of their last-16 tie, only to be stunned by alate comeback and Nacer Chadli’s stoppage-time winner.

“It’s a historical moment,” said Moriyasu, who has set his sights on reaching the last-eight in Qatar. “If I’m thinking of the development of Japanese football, we have been building up and thinking of players.

“It’s a big surprise. We are reaching to the global standard and we saw the Saudi Arabians with a surprise win, so we are showing our capability of Asian football.

“This is not the end. We are not going to be the swing from happy to sad. We will reflect on it and prepare for the next game.”

Defeat for Germany in manager Hansi Flick’s first game at a major tournament suddenly leaves the 2014 winners in a position of peril in Group E.

Flick’s men face Spain, who thrashed Costa Rica 7-0 last night, on Sunday in their second game, by which time Japan will have had the chance to move to six points by beating the Central American nation.

A Japanese fan clears rubbish from the stands

David Beckham in the stands for England v Iran

Poland’s Bartosz Bereszynski and Mexico’s Hirving Lozano battle for the ball during the World Cup group C match at the Stadium 974 in Doha, Qatar

France’s Olivier Giroud celebrates with teammates after he scored during the Qatar 2022 World Cup Group D football match v Australia at the Al-Janoub Stadium in Al-Wakrah, south of Doha

Dancers perform during the opening ceremony

The Qatar 2022 mascot La’eeb performs during the opening ceremony

Morgan Freeman, at the opening ceremony of the FIFA World Cup 2022 in Qatar

View of a giant replica World Cup in Qatar

That would leave Germany needing a point at the very least against Spain to avoid the humiliation of a second straight group-stage exit.

“In 2018 I was not part of the team, and I don’t really care to be honest,” said Flick, who took over from Joachim Low after last summer’s Euros. “I’m looking forward. We have to make up for it against Spain.”

Prior to kick-off, Germany’s players responded to FIFA’s ban on the OneLove armband by warming up in training shirts with rainbow-striped sleeves and then covering their mouths during a team photo in reference to being gagged by football’s global governing body.

“It’s important for us to do a statement like this,” said Chelsea forward Kai Havertz. “For us it was the right sign to do to show the people that we try to help wherever we can.”