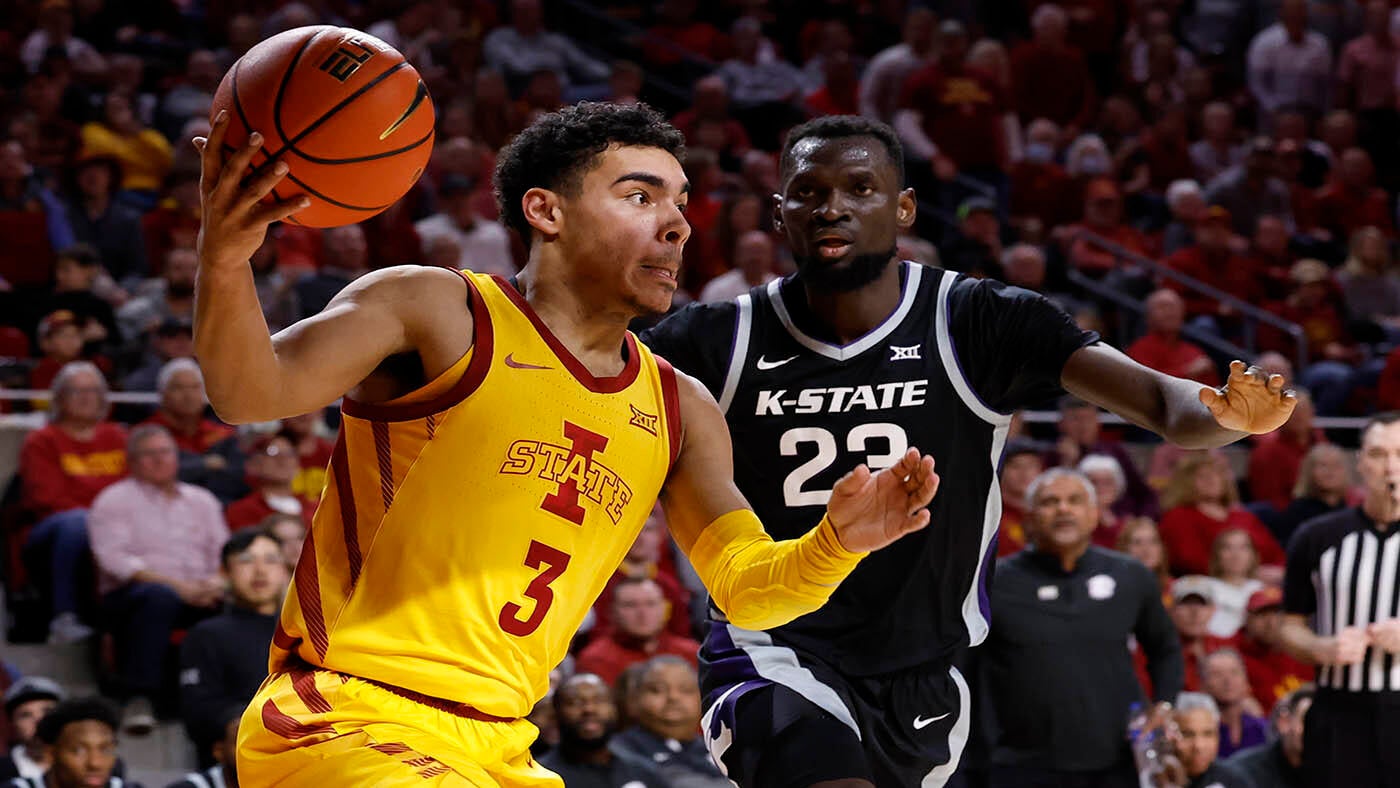 Just three days after ascending to solo possession of first place in the Big 12, No. 5 Kansas State’s run as the lone team atop the standings of the nation’s most cutthroat conference came to an end as the Wildcats fell 80-76 at No. 12 Iowa State. Jaren Holmes led the Cyclones with 23 points, including a pair of free throws in the final seconds that helped cement the outcome.

With the win, Iowa State (15-4, 6-2 Big 12) rose into a three-way tie for first place in the Big 12 along with K-State and Texas after the Longhorns handled Oklahoma State at home on Tuesday. Four players scored in double figures for the Cyclones, who remained unbeaten at home and washed out the bad taste of a blown 16-point lead from Saturday’s loss at Oklahoma State.

Kansas State also had four players in double figures, but the Wildcats struggled defensively in the second half as Iowa State shot 62.5.% from the floor in the final half and made 15 of 19 free throws. The Wildcats (17-3, 6-2) got 23 points from point guard Markquis Nowell, including 18 in the second half, but simply couldn’t come up with enough stops.

K-State will drop off the projected No. 1 seed line in CBS Sports Bracketology Expert Jerry Palm’s projected NCAA Tournament field because of the loss. The Wildcats remain one of the best stories in college basketball after being picked to finish last in the Big 12 under first-year coach Jerome Tang, but Tuesday was a reminder of just how rough life is in the Big 12 this season.

The win marks Iowa State’s first victory over a top-five opponent since the 2015-16 season when the Cyclones beat No. 1 Oklahoma and No. 4 Kansas in back-to-back weeks. Current head coach T.J. Otzelberger was an assistant for that that team, which rose as high as No. 4 in the AP poll and reached the Sweet 16 as a No. 4 seed in the NCAA Tournament.

Those heights seemed distant in the 2020-21 season as the Cyclones struggled to a 2-22 (0-18) record. But then ISU hired Otzelberger away from UNLV, and its fortunes immediately turned around. The Cyclones finished 22-13 last season in their first year under Otzelberger and reached the Sweet 16 on the heels of the worst season in program history. The 2022-23 team is proving that last season was no fluke.

In fact, this Iowa State team appears even better than last season’s squad, despite losing leading scorer Izaiah Brockington to graduation and second-leading scorer Tyrese Hunter, who transferred to Texas. The Cyclones are now 6-4 in Quad 1 games and are a combined 2-0 against Kansas State and Texas with whom they share first place in the conference.

Tuesday night’s action merely reinforced just how brutal the Big 12 is this season. Not far behind the trio of 6-2 teams are perennial powers Baylor and Kansas at 5-3. Also at 5-3 is No. 11 TCU. All six teams in the group of 6-2 and 5-3 squads appear to have a legitimate chance of winning the conference. The league’s bottom four of Oklahoma State, Oklahoma, West Virginia and Texas Tech are also among the top 75 in the NET rankings.

The Big 12 is a grind, but the good thing for the Wildcats is that Tang is no stranger to this reality. After 19 seasons as an assistant at Baylor, Tang knows the Big 12 better than most. After his team’s first Big 12 loss at TCU on Jan. 14, K-State rebounded by winning against Kansas in its next outing.

There are plenty of defensive issues for the Wildcats to address from the film of Tuesday’s game, but there is no reason for concern because of the Iowa State loss. Hilton Coliseum is a notoriously difficult place for opponents, and K-State executed well enough offensively in that environment to win. Ultimately, the Wildcats’ defense is what let the team down.

Arsenal FC must forget the Europa League, they may never get a better chance to win the title