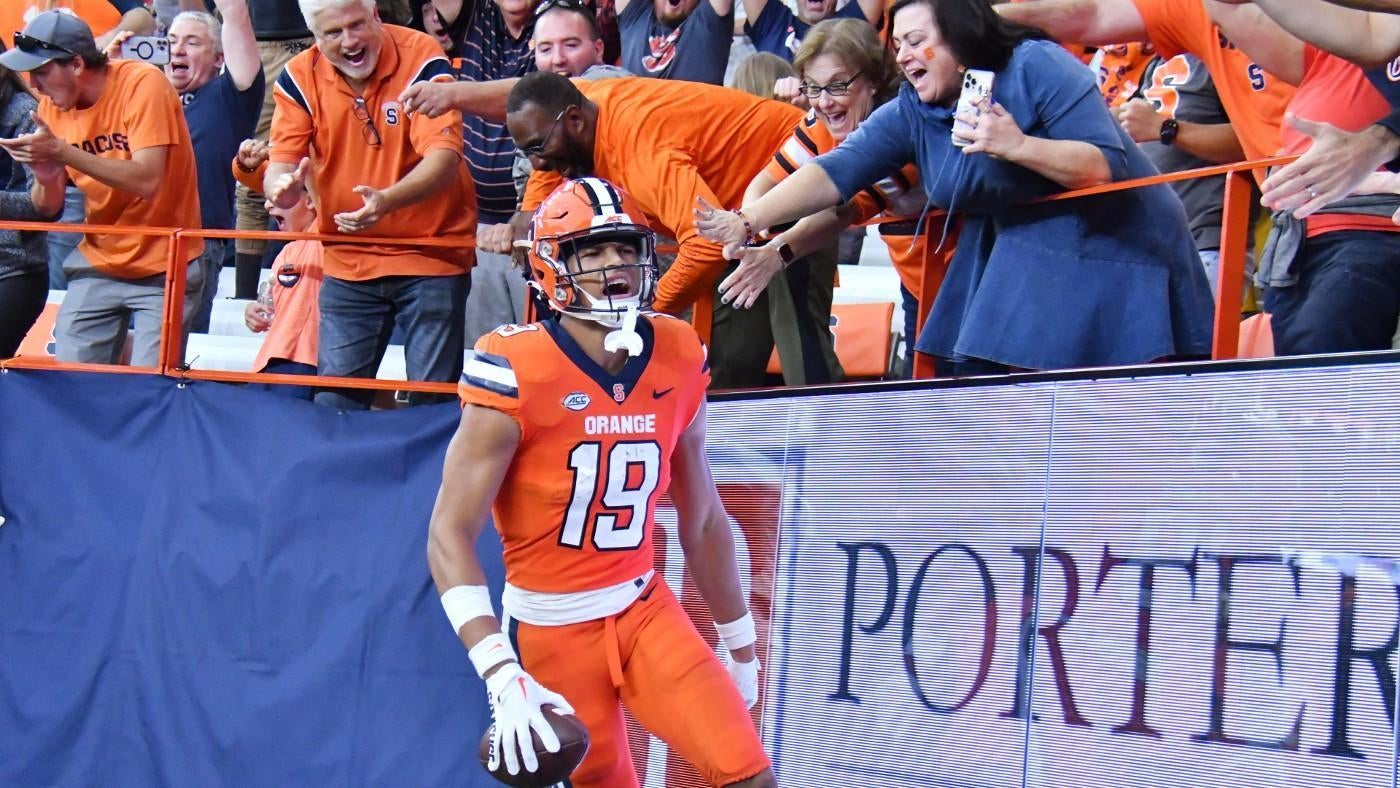 Duke and Kansas are playing Saturday in a nonconference showdown between unbeaten teams that is drawing national attention. No, basketball season didn’t sneak up on you. The Champions Classic showdown between the Blue Devils and Jayhawks on the hardwood isn’t coming until Nov. 15. This is football, and Saturday’s game between the two is emblematic of a basketball-school renaissance occurring on the gridiron during the first month of this college football season.

Duke, Kansas, Kentucky, North Carolina, Syracuse, UCLA, Maryland and Indiana — most of those certified basketball blue bloods — are unbeaten in football. So are NC State and Wake forest who, to many college sports fans, may be known more for their basketball histories than for their football success.

Kentucky football coach Mark Stoops pushed back on the notion floated by UK basketball coach John Calipari that Kentucky is a basketball school last month, and the Wildcats have backed it up by rising to No. 8 in the AP Top 25 on the heels of a 10-win season. Now, others appear to be following UK’s lead and giving their fans another sport to get fired up about other than hoops.

As this quirky storyline develops, our basketball writers are monitoring the situation. For this edition of the dribble handoff, we’re assessing which of these unlikely football success stories we’re enjoying the most so far in the 2022 season.

Kentucky being 3-0 (with a win at Florida) and ranked eighth in the Associated Press poll is my favorite of these stories, if only because it comes on the heels of that offseason back-and-forth between UK basketball coach John Calipari and UK football coach Mark Stoops. As you likely know (considering the story created national headlines), Calipari irritated Stoops last month when he said Kentucky isn’t a football school like Alabama or Georgia while publicly making the case that his basketball program needed a new practice facility and should be prioritized. Stoops quickly clapped-back on Twitter by highlighting how UK football has been more successful in the postseason recently than UK basketball, and I really don’t think I’ve ever seen a high-profile coach publicly go at a higher-profile coach from the same school the way Stoops went at Calipari. It was wild and awkward and a total headache for Kentucky athletic director Mitch Barnhart.

Calipari subsequently apologized for his words — but Stoops, at least initially, wouldn’t even take his call. Again, awkward. And now Stoops has UK football as arguably the biggest threat to Georgia in the SEC East — and in position to possibly be 7-0 heading into next month’s game at Tennessee. That’s amazing. Meantime, give Calipari credit for at least being able to laugh at himself in hindsight. While speaking alongside Louisville coach Kenny Payne last week, Calipari jumped in when Payne made the point that Kentucky is a “basketball state.”

“Be careful,” Calipari said to a round of laughs. — Gary Parrish

Remember back in college or high school when, for whatever reason, you absentmindedly strolled into the wrong classroom. You walk in, notice the decor on the walls is unfamiliar. The teacher is not who the teacher is supposed to be. Ah, yes. I’m in the wrong place. Kinda like what I feel here in scribbling out a few college football thoughts. Let’s talk some pigskin fellas! Seeing all these schools that have prideful and mostly reliable histories in college hoops find some fresh success in football is one of the best September storylines, far as I’m concerned. I think it’s helped the sport in a major way, in fact.

As for which hoops school has the best football storyline, it’s hard for me to pick a favorite, but I’ll lean with the Orange. I’m going with Syracuse in part because I live in the Northeast and for the majority of my life this program has been a non-entity nationally.

Syracuse has wins this season over Louisville, UConn and Purdue. Respectable start, even if not world-beating. Next up is a tricky test vs. Virginia, then Wagner. If Cuse can win both of those, one of the biggest games of the weekend of Oct. 15 will be (currently ranked) NC State at Syracuse. Wouldn’t that be a plot twist? Cuse has been an afterthought in college football for far too long. Its got a fun home field advantage by playing in the Dome. It’s got some distinguished history. But the move to the ACC hasn’t done anything to increase its presence in college football. It’s also worsened its place in basketball. (Conference realignment isn’t all it’s cracked up to be.)

Dino Babers might have found a little magic again in central New York, though I’d imagine this feel-good Syracuse story will run its course once the Clemson/Notre Dame/Pitt/Florida State/Wake Forest gauntlet arrives in October. That’s rough. If Syracuse can get out of that with a 2-3 mark, it will be a huge win and amount to a big season. If anything, this start has been a boost to hopefully ensure SU has its first season at .500 or better since 2018.   — Matt Norlander

Turner Gill couldn’t do it. Charlie Weis couldn’t do it. Clint Bowen, David Beaty, Les Miles: they all couldn’t do it. But Lance Leipold is actually doing what his predecessors failed to accomplish — he’s making Kansas football (dare I say it!) fun to watch again. After 13 consecutive losing seasons — which in that span had seven seasons with two wins or less and two totally winless seasons — KU is 3-0 to start the season with wins over Tennessee Tech, West Virginia and most recently a really impressive road victory over Houston. That’s already tied for the most it has had in a season since it won five games in 2009.

The Jayhawks have consistently been one of the worst football teams at the FBS level over the last decade. So it’s probably too early to say KU is definitely back to its winning ways like under Mark Mangino. But KU has actually been fun to watch. They have an identity with a do-it-all QB in Jalon Daniels. They play with an edge on defense. And for the first time in a long, long, looooong time, they seem to have a semblance of hope for the future of the program. — Kyle Boone

The reason why North Carolina’s football team is so fun to watch this season ties in directly with the Tar Heels’ basketball heritage. Redshirt freshman quarterback Drake Maye is lighting up box scores three games into his tenure as the starter much like his brother, Luke Maye, used to light up box scores on the hardwood. Luke developed from a relatively unheralded prospect into a contributor on the Tar Heels’ 2017 national title team and then into an All-ACC performer in his last two seasons. He once scored 30 points and 15 rebounds in a win at Duke and will be fondly remembered for his significant contributions as a four-year player from an in-state background.

His younger brother may go down as an even bigger star in Tar Heels’ lore. Drake was a five-star prospect in the 2021 recruiting class, per 247Sports, and he ranks eighth nationally in passing efficiency this season. In addition to his 930 yards passing, 11 touchdowns and just one interception on a 74.2% mark, Maye has also accumulated 146 yards rushing. Filling the shoes of fifth-round NFL Draft pick Sam Howell seemed like a daunting task, but Maye is doing it incredibly well while helping to build an immaculate two-sport legacy for the Maye family at North Carolina. — David Cobb

Grp. that gets a yearly pay cut? Crossword Clue