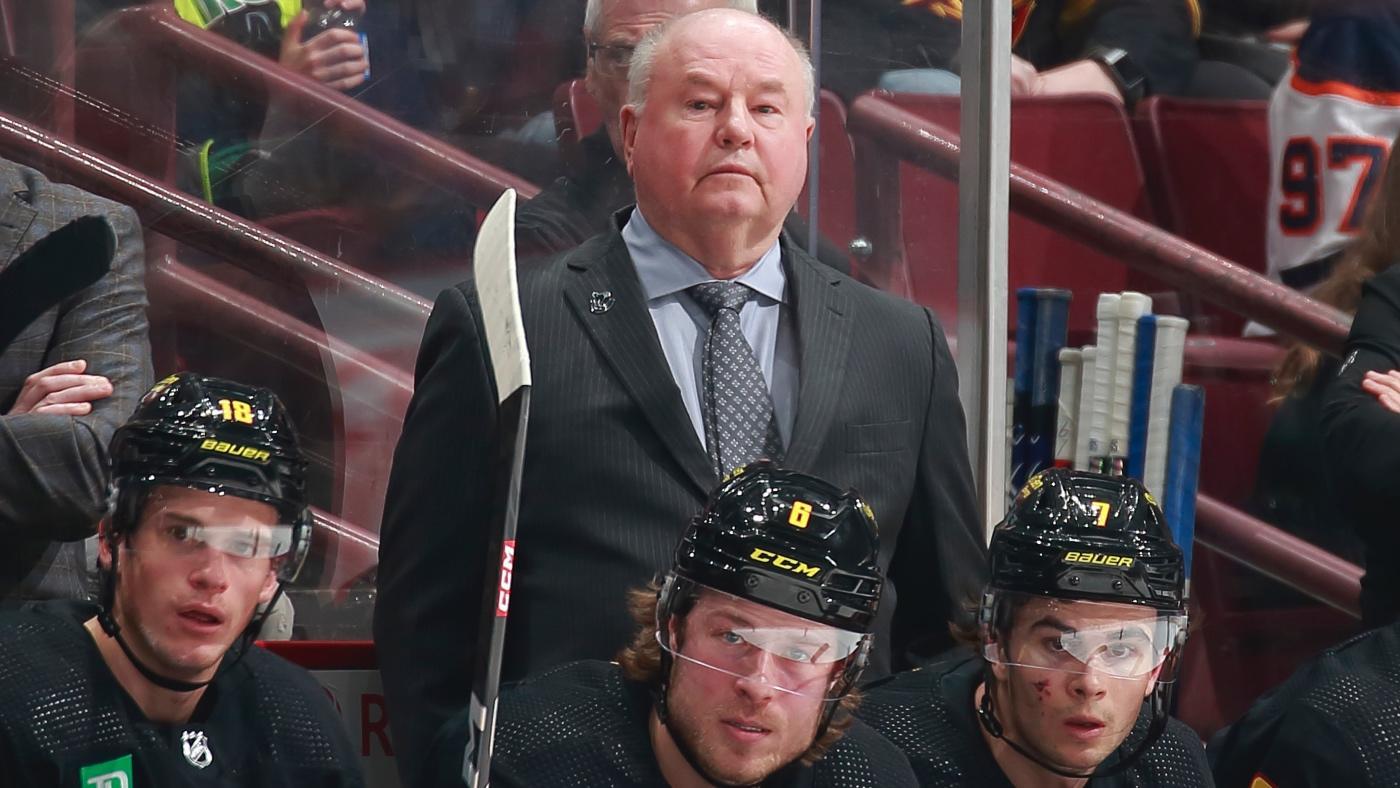 This past weekend in the NHL was an eventful one that saw the first coaching change of the season. Amidst a frustrating season, the Vancouver Canucks fired Bruce Boudreau and immediately replaced him with Rick Tocchet.

Around the rest of the league, Johnny Gaudreau made his return to Calgary, and Connor McDavid hit a key milestone less than 50 games into the season.

Let’s take a look back at some of the most noteworthy headlines and highlights from the weekend that was in the NHL.

Goal of the weekend: Charlie McAvoy swims through the Sharks

Like the rest of the Boston Bruins, Charlie McAvoy is having a monster season. In the team’s 4-0 win over the San Jose Sharks on Sunday, McAvoy added some flair to another dominant win for his team.

In the second period, David Pastrnak dropped the puck to McAvoy in the neutral zone, and the swift-skating defenseman picked up a head of steam as he hit the offensive blue line. He caught three or four Sharks flat-footed and stickhandled through them like they were practice cones. A smooth deke to beat James Reimer was the cherry on top.

That goal helped the Bruins notch their fifth straight win, and they have won nine of their last 10. Boston was already tough to beat, but when McAvoy is making plays like that, it’s next to impossible.

Robbery of the weekend: Rittich lays out to stonewall Hayes

A Jets goaltender being the focus of this section has become a pretty common occurrence, but it’s only been Connor Hellebuyck to this point. David Rittich saw how much shine Hellebuyck was getting from the NHL Rewind and wanted in on the fun too.

In the Jets’ 5-3 win over the Flyers on Sunday, Winnipeg made the mistake of leaving multiple Flyers open in front of the net. The puck wound up on the stick of Kevin Hayes, but he needed a fraction of a second to settle the pass. That allowed Rittch to come diving across the crease and shut down what looked like a sure goal.

Rittich hasn’t had the strongest season as the Jets’ backup goaltender, but that save will be on the highlight package at the end of the season for sure.

Bruce Boudreau’s lack of job security was one of the worst kept secrets in the NHL, and the Canucks officially fired him on Sunday. The team also announced that it had hired former Arizona Coyotes head coach Rick Tocchet to replace him.

After the Canucks’ slow start to the season, the writing had been on the wall. When Canucks president Jim Rutherford said that the team needed “major surgery,” the entire league knew that big changes were coming.

Frankly, Boudreau got a raw deal from a Canucks team that has lacked direction for several years now. The team brought him in midway through the 2021-22 season, and Boudreau got just 103 games to prove himself. If it’s any consolation, the fans clearly appreciated Boudreau’s contributions to the team.

Tocchet now becomes the Canucks’ fifth head coach since they fired Alain Vigneault in 2013, and the team still has a lot of work to do before it can compete for a Stanley Cup. Vancouver will likely miss the playoffs for the third straight season, and the roster needs to be overhauled over the next couple of offseasons.

In Saturday’s 4-2 win over the Vancouver Canucks, Connor McDavid scored his 40th goal of the season… in just 48 games. McDavid took a perfect stretch pass from Zach Hyman, turned on the jets, and slid the puck between the wickets of Spencer Martin.

McDavid is now on pace for 68 goals this season, which is a number that hasn’t been hit in decades. The last player to find the back of the net 68 times in a single season was Oilers legend Jari Kurri, who did so in the 1985-86 campaign.

In even better news for the Oilers: that win over Vancouver was the team’s sixth straight victory. Just a couple of weeks ago, Edmonton was just on the outside of the playoff bubble. Now, the Oilers are creeping up toward the top of the Pacific Division standings on the strength of McDavid’s superhuman season.

No Caufield, no problem for Canadiens

On Saturday, the Montreal Canadiens announced that leading goal-scorer Cole Caufield will miss the rest of the season with a shoulder injury. The Canadiens were already one of the worst teams in the NHL, and Caufield’s absence will only hurt the team’s watchability in the long run, but it didn’t bother them against the Toronto Maple Leafs.

Just hours after the Canadiens announced that Caufield would miss the remainder of the season, they faced off against their bitter rivals. To make matters worse, Toronto got on the board less than a minute into the game on a goal from Mark Giordano.

Calle Jarnkrok gave the Maple Leafs a 2-0 lead later in the first period, but the shorthanded Canadiens weren’t going to go down without a fight. Josh Anderson extended his goal streak to three games and gave the Habs some life early in the second period.

With under seven minutes left in the second period, a great effort from Michael Pezzetta allowed Rafael Harvey-Pinard to score from in tight and even the game at 2-2.

Thanks to some big saves from goaltender Sam Montembeault, Montreal was able to get the game to overtime, and that is when Rem Pitlick stepped up. Pitlick motored down the left-wing side and ripped a shot over the shoulder of Ilya Samsonov to win the game.

After leaving for the Columbus Blue Jackets in the offseason, Johnny Gaudreau made his long-awaited return to Calgary on Monday night. As expected, the fans at the Scotiabank Saddledome weren’t exactly excited to see him.

The first time Gaudreau touched the puck, the entire crowd let out a loud boo that could be heard from Red Deer, Alberta.

Gaudreau did get his chance to silence the crowd early when he was slashed on a breakaway and awarded a penalty shot. Once again, Flames fans booed loud enough to shake the roof, and Gaudreau missed well wide on his attempt.

There was a moment of appreciation from the fans toward Gaudreau, though. When Calgary played a tribute video for Gaudreau, the fans stopped booing just long enough to give him a standing ovation.

In the actual game, the Flames jumped out to a 2-0 lead, but the Blue Jackets made sure to put up a fight for their teammate. It went to overtime, where Dillon Dube ended the game for Calgary with a one-timer that snuck by Joonas Korpisalo.

Golden Knights at Devils | Tuesday, Jan. 24: These two teams are going in very opposite directions. The Devils recently became the first team in the Metropolitan Division to reach the 30-win mark and have won six of their last seven games. Meanwhile, the Golden Knights have dropped four of their last five. That is a big chance for Vegas to make a statement on the road.

Hurricanes at Stars | Wednesday, Jan. 25: Star forward Max Pacioretty suffered another Achilles injury just two weeks after returning from a previous one in an absolutely brutal turn of events. Still, the Hurricanes were an elite team without him, so they should be just fine. It also helps that goalie Frederik Andersen has allowed just seven goals in four starts since returning to the crease.

Bruins at Lightning | Thursday, Jan. 26: Whenever the Bruins and Lightning get together, the matchup always has a playoff feel to it. That should be the case once again, as Tampa Bay aims to improves its standing in the playoff race against the NHL’s most dominant team.

Golden Knights at Rangers | Friday, Jan. 27: The Golden Knights’ East Coast road trip certainly isn’t an easy one for a team that’s attempting to right the ship. They’ll likely get to face reigning Vezina Trophy winner Igor Shesterkin and a Rangers squad that could be starting to find themselves.

Capitals at Maple Leafs | Sunday, Jan. 29: The Maple Leafs are once again proving to be a dominant force in the East with the second-most points in the league behind the Bruins. However, the Capitals have quietly put together a decent season that has been highlighted by the historic accolades of Alex Ovechkin. There should be plenty of offensive firepower in this one.

How to Watch Giresunspor vs. Galatasaray: Free Live Stream,…

How to Watch Boston College at Virginia: Stream Men’s…

How to Watch Northeastern at Delaware: Stream Men’s…