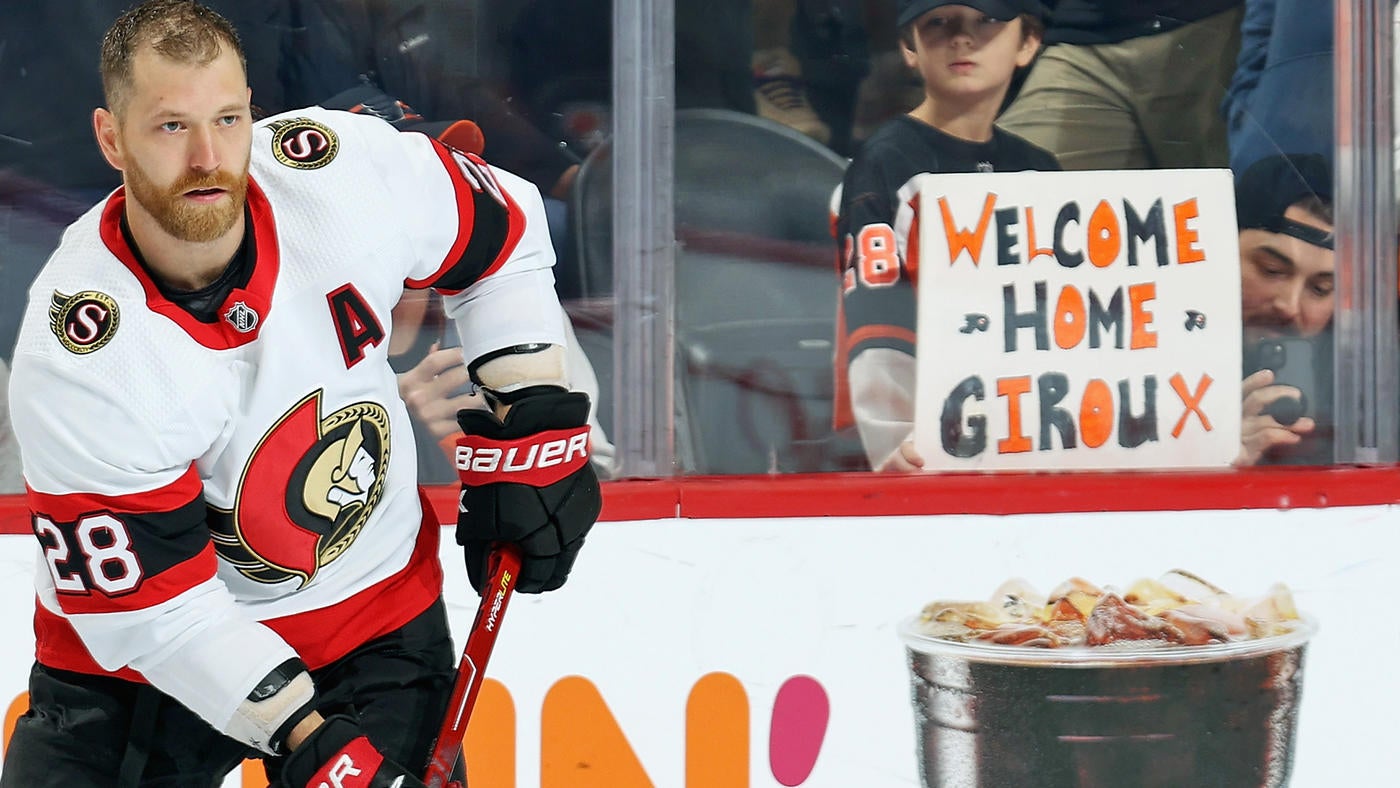 Another weekend has come and gone in the NHL. We saw an emotional homecoming in Philadelphia and one team’s winning streak reach nine games.

Let’s take a look at the top plays and storylines from the weekend that was in the NHL ranks.

The St. Louis Blues made a splash back in 2018 when they acquired veteran forward Ryan O’Reilly from the Buffalo Sabres. O’Reilly helped lead the Blues to the franchise’s first Stanley Cup in 2019, but it was a trade that has benefitted both teams. That’s because star center Tage Thompson went to the Sabres in the deal and continues to develop into one of the sport’s top goal scorers.

During Saturday’s game against the Boston Bruins, Thompson put his goal-scoring ability on full display. He stole the puck from Bruins star David Pastrnak around the blue line and was able to race the other way. The 25-year old then stick-handled his way around Bruins veteran forward David Krejci and was able to slip the puck past goalie Keith Kinkaid on a forehand shot.

Thompson showcased his insane goal-scoring ability on this play and continued his stellar season despite a 3-1 loss to the Bruins. The Sabres star currently leads the team in points (19) and goals (11) in 15 games on the year thus far.

Midway through the first period of Saturday’s game against the Winnipeg Jets, Calgary Flames goaltender Jacob Markstrom made a sequence that most dream about.

Jets forward Mason Appleton got in all alone on Markstrom, but Markstrom was able to swat the puck away with his stick. However, that wasn’t where the play ended. Just seconds later, the puck ended up on the stick of Jets star Mark Scheifele. Scheifele immediately decided to put the puck on net in an effort to take advantage of an out-of-position Markstrom, but Markstrom flung his entire body across the crease and into the air to stop the shot with his glove.

Markstrom’s stop was absolutely jaw-dropping and ended up being a key difference in a 3-2 Flames’ win over the Jets.

It was the end of an era at the 2022 trade deadline when the Philadelphia Flyers traded Claude Giroux to the Florida Panthers. Giroux had spent the first 15 seasons of his NHL career in Philadelphia and played 1,000 games for the franchise.

On Saturday, Giroux returned to Philadelphia for the first time since he was traded as a member of the Ottawa Senators. Prior to the game getting underway, the Flyers played a tribute video for Giroux.

“I respect this fan base so much, this organization, the players that play on that team,” Giroux said after the game. “I’m going to remember this game for a long time.”

Giroux had one of his better games of the 2022-23 season as he registered three assists in a 4-1 Senators’ win over the Flyers.

When the puck dropped on opening night in the NHL, Devils head coach Lindy Ruff was already on the hot seat. The team experienced a disappointing 2021-22 season, and all it took was an 0-2-0 start for the fans to turn on Ruff. In New Jersey’s second game of the season, a 5-2 loss to the Detroit Red Wings, chants of “Fire Lindy” broke out in the crowd.

Since then, the Devils have gone 12-1-0 and won their ninth game in a row on Saturday night. Not only do they look like one of the NHL’s elite teams, but their collection of young talent makes them a highly entertaining team as well.

During New Jersey’s 4-2 win over the Arizona Coyotes, the fans in attendance at the Prudential Center apologized to Ruff for their previous transgressions.

Now all is well in New Jersey these days. The fans have made up with the head coach, the team is dismantling the rest of the league every time it touches the ice and Jack Hughes is scoring goals like this one.

College basketball is back, which means there’s potential for dramatic buzzer beaters on a nightly basis. However, it was the NHL that provided the sports world with that drama on Sunday night as the Winnipeg Jets tied the Seattle Kraken in stunning fashion, with just seconds left in regulation.

With under 30 seconds left in the third period and the Jets down 2-1, Kraken defenseman Carson Soucy took an ill-advised penalty for punching Pierre-Luc Dubois in the back of the head. There are dumb penalties, and then there is what Soucy pulled with a one-goal lead.

Soucy nearly got away with his poor decision, too. Time was winding down on the Jets’ comeback effort when Kyle Connor just put a shot on goal that generated a rebound. Blake Wheeler was in the right place at the right time, and he knocked home the rebound to tie the game with 3.9 seconds left on the clock. Not a bad way to score your 300th NHL goal.

In overtime, Winnipeg completed its comeback with a great end-to-end effort from Mark Schiefele.

Over the weekend, the Toronto Maple Leafs honored Hall of Fame defenseman Börje Salming, who still holds franchise records for goals, assists and points by a defenseman. Just a couple of months ago, Salming was diagnosed with ALS, but he was able to make it to Toronto for an emotional ceremony before the team’s game against the Vancouver Canucks.

Salming is a Swedish legend, and many NHL players from Sweden grew up idolizing the Hall of Fame defenseman. In honor of Salming, Maple Leafs head coach Sheldon Keefe chose to ice a starting lineup made up entirely of Swedish players. William Nylander, Calle Jarnkrok, Pierre Engvall were at forward, Timothy Liljegren and Rasmus Sandin were on defense and Erik Källgren was in goal.

It was a night to remember in Toronto, and the team came back from down 2-0 to win the game, 3-2. Jarnkrok and Engvall even teamed up to tie the game in the third period.

Maple Leafs at Penguins | Tuesday, Nov. 15: After losing seven in a row, the Penguins are playing somewhat better as they’ve won two of their last three games. The Penguins did beat the Maple Leafs 4-2 on Friday thanks to a two-point performance from Evgeni Malkin and a solid showing from goalie Casey DeSmith in net.

Avalanche at Hurricanes | Thursday, Nov. 17: This could be a Stanley Cup Final preview. These are two of the more dangerous offensive teams across the league and it won’t be a surprise if they’re facing off in June. Enjoy this one, hockey fans.

Devils at Maple Leafs | Thursday, Nov. 17: If you’re not watching the Devils, shame on you. This team is a ton of fun to watch and they’re riding a nine-game winning streak. The young talent is finally showing up and this could really be a playoff team. This will be another tough test for New Jersey, but they are extremely hot right now.

Flames at Panthers | Saturday, Nov. 19: The Matthew Tkachuk/Jonathan Huberdeau trade dominated headlines throughout the offseason. The early returns have the Panthers winning the trade with Tkachuk having the better season. It’ll be interesting to see how each player fares against their old teams in this one.

Golden Knights at Oilers | Saturday, Nov. 19: The Golden Knights had won nine consecutive games before falling to the Blues on Saturday. Even with the loss, Vegas has had an exceptional start to the season and a lot of that has to do with star center Jack Eichel finally being 100 percent. A battle between Eichel and Connor McDavid? That’s one game that you’re not going to want to miss.