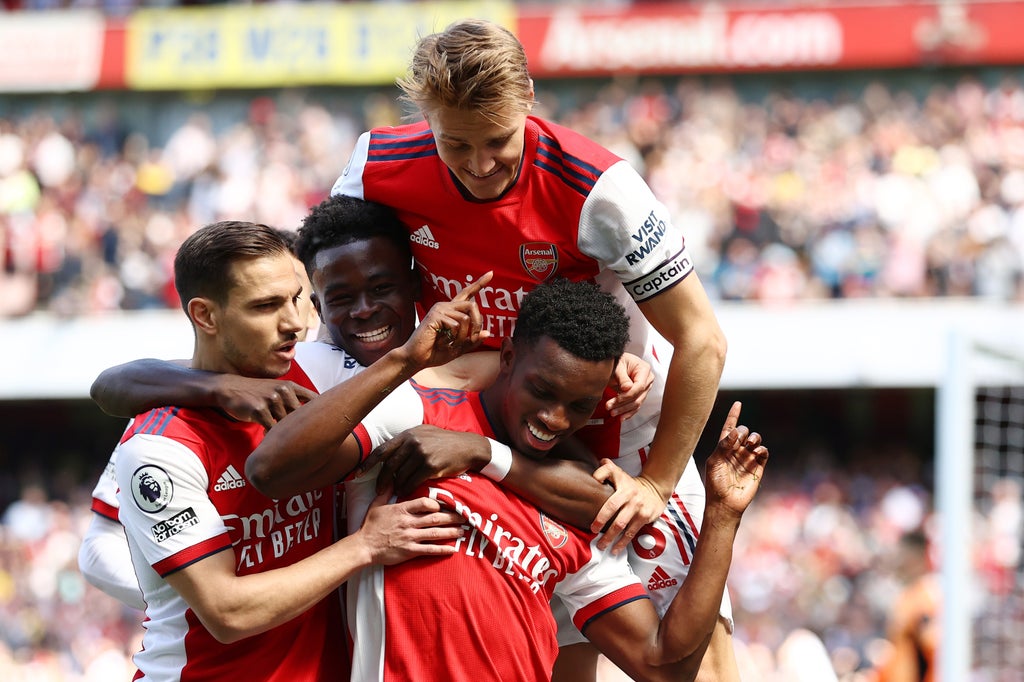 t half-time, Arsenal looked like they were cruising to victory against Leeds.

The first-half was a dream one for Mikel Arteta, with the Gunners scoring twice inside the opening 10 minutes thanks to a brace from Eddie Nketiah.

Arsenal were all over Leeds, and Bukayo Saka and Gabriel Martinelli were in particular getting plenty of joy out wide.

Leeds defender Luke Ayling was then sent off just before the half-hour mark, with VAR intervening to ensure his yellow card was upgraded to a red after he scythed down Martinelli.

Arsenal continued to pepper Leeds from there, who didn’t even have a shot in the first-half, and the three points looked in the bag.

But if this top-four race has taught us anything, it’s that you can never say never and the journey is a rollercoaster. Arsenal were not at their best in the second-half, seemingly taking their foot off the gas and failing to kill the game.

A slick Leeds set-piece, that saw Diego Llorente head home at the back post, setup a nervy finish that seemed implausible when Nketiah had opened the scoring.

Arsenal, to their credit, held firm and only a late Rodrgio header had hearts in mouths for fans.

Arteta’s side did, in the end, claim a vital three points. With three games to go they are now four points head of Tottenham and a win at their rivals on Thursday will secure Champions League football. A prospect that seemed unthinkable earlier this season.

Nketiah the hero again as he mulls over future

At the start of April, few would have predicted that it would be Nketiah firing Arsenal towards the Champions League.

The striker, however, has taken his chance ever since Alexandre Lacazette caught Covid-19 last month and he has not let up.

This win highlighted his fine form and he has now scored four goals in his last five games, with his brace today summing up what he brings to Arsenal.

The first came after pressing Leeds goalkeeper Ivan Meslier, who dawdled on the ball and had it stolen off him by Nketiah.

The second was a well taken finish, with Nketiah finding space in the box and slotting the ball into the bottom corner with his left foot.

Arsenal have lacked a presence in the box this season, but in Nketiah they finally have an outlet and someone able to run in behind.

Arsenal have had issues at left-back, ever since Kieran Tierney injured his knee at the start of last month. Nuno Tavares has largely played there, although Granit Xhaka has also filled in.

Takehiro Tomiyasu was given the nod against Leeds and he performed well, keeping Raphinha quiet all afternoon.

The Japan international has had a solid first season in north London and this display underlined how sorely missed he has been.

Comfortable with both feet and good in the air, Tomiyasu has been vital to the way Arsenal build from the back and that was the case on Sunday given though he was on the left instead of the right.

It was a timely boost ahead of a trip to Tottenham on Thursday.