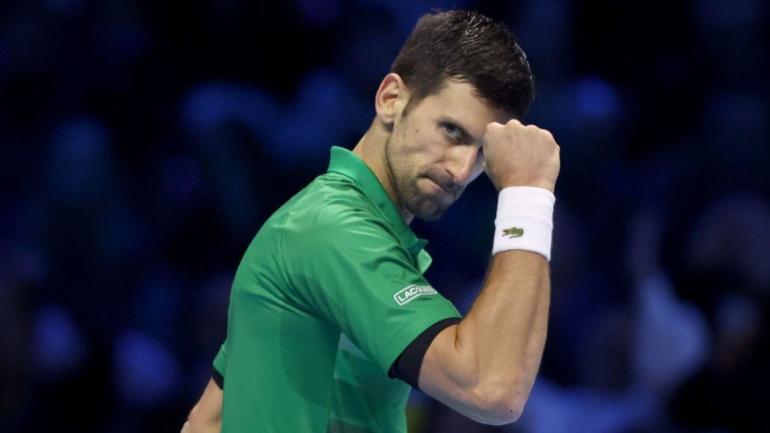 Novak Djokovic captured his sixth ATP Finals title on Sunday, tying Roger Federer’s record for the most all-time, with a straight sets victory over world No. 4 Casper Ruud. The win ended a six-year drought of ATP Finals titles for Djokovic, who defeated Ruud 7-5, 6-3 in Turin, Italy.

Djokovic last triumphed in the ATP Finals in 2015, which was then his fourth consecutive year winning the event — his first victory came in 2008. With Sunday’s win, Djokovic, 35, became the oldest player to claim an ATP Finals trophy, and it also made him the richest: Djokovic earned a tennis-record $4.7 million payday for winning all five matches in Turin.

“Seven years, it’s been a long time,” said Djokovic, the first player to win an ATP Finals title in three different decades, “but at the same time this — the fact that I waited seven years — makes this victory even sweeter and even bigger.”

This wasn’t the only wait lifted for Djokovic this week. On Wednesday, the Australian government announced it will grant a visa for Djokovic to enter the country for the 2023 Australian Open. Djokovic missed the 2022 event and was deported from Australia because he refused to get vaccinated against COVID-19, a dramatic situation that led to the Serbian star receiving a three-year ban from the country. Australian immigration minister Andrew Giles said he lifted the ban because the grounds for his original visa cancellation no longer exist.

Sunday’s win improved Djokovic’s record to 18-1 on the year. Djokovic will end the 2022 season No. 5 in the ATP top 10, and he tied Carlos Alcaraz for the most ATP titles this year with five.