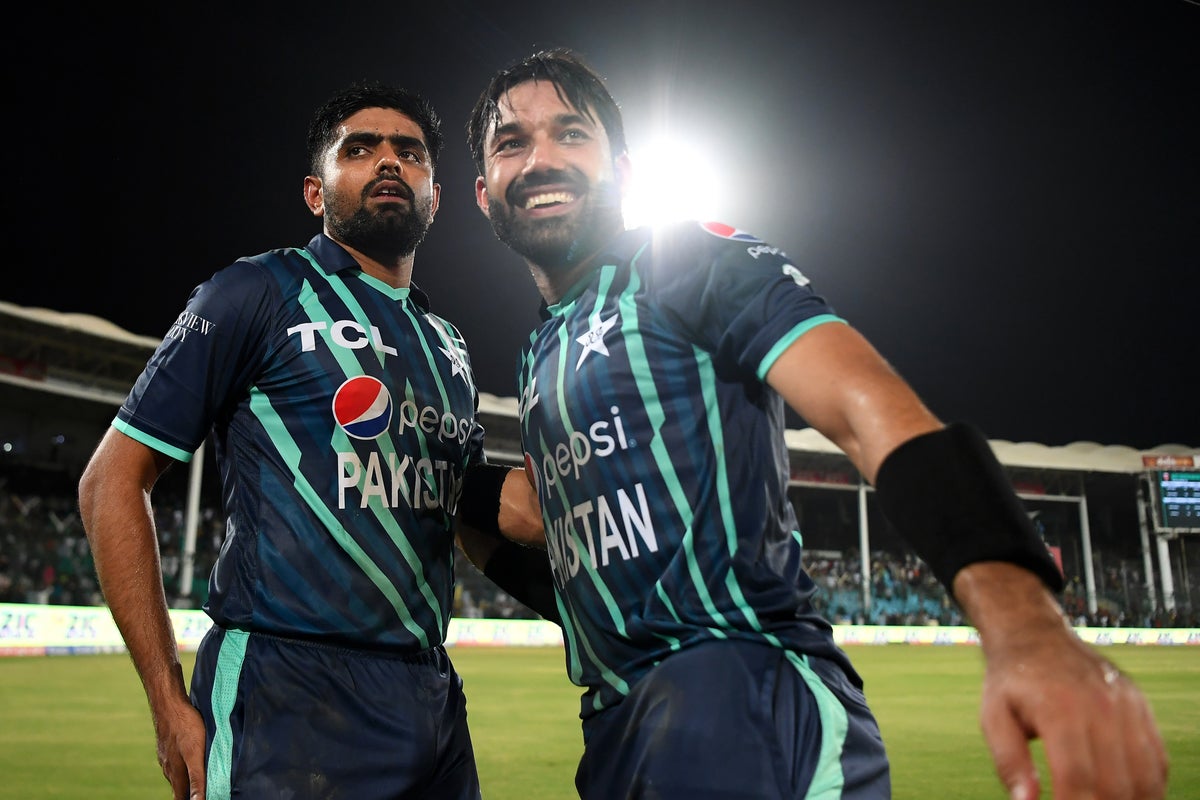 The tourists were more than happy after posting 199 for five, with captain Moeen Ali to the fore with 55 not out in 23 deliveries, but were comprehensively outclassed by the home side’s openers.

Babar made a mockery of questions over his scoring rate at the Asia Cup, hammering 110 not out 66 balls, and Rizwan smashed an unbeaten 88 as they shared nine sixes and 16 fours.

England will be concerned about the lack of incision from their bowling attack, but the two chances they did generate against Rizwan were squandered as Alex Hales dropped him on 23 and Phil Salt spurned a stumping on 32.

England started well after winning the toss, Salt and Hales pumping 42 off the first five overs, including one six apiece as they set the tone for a high-scoring evening at the National Stadium.

Shahnawaz Dahani put a serious dent in their progress in the sixth over with two wickets in as many balls. Hales, fresh from his comeback fifty 48 hours earlier, had his bails clipped by an in-cutter on 26 before Dawid Malan was bowled round his legs for a golden duck.

The hat-trick ball was well directed by Dahani but well defended by Ben Duckett, a rare show of deference in an assertive knock of 43 in 22 balls. He showed off his range with a couple of deft scoops over the keeper, nailed his reverse sweeps and at one stage took four boundaries in eight balls.

Salt had slowed enough to make his dismissal by Haris Rauf only a minor setback but when Duckett was bowled in the next over, attempting to flick Mohammad Nawaz over fine-leg, it felt more significant.

But England went even harder at the death, Harry Brook making a handy 31 before paying the price for an ill-judged ramp and Moeen laying in some big hits. The skipper launched Usman Qadir for consecutive sixes and ended the innings with two more as he powered his to a substantial total.

Pakistan knew they would rely heavily on their elite opening duo, but they wore the burden lightly. Babar and Rizwan eased into their work, keeping pace with a demanding asking rate from off as they tore into four different bowlers in a chaotic powerplay.

Seamers David Willey, Sam Curran and Luke Wood all took some blows but Liam Dawson was unfortunate when he drew a skier from Rizwan only for but Hales to juggle it at mid-off.

As if to underline the gravity of the miss, Rizwan launched the next ball for six. Adil Rashid came close to bailing out Hales when his first delivery ripped past Rizwan’s outside edge as he left his crease, but Salt’s glovework let him down.

Having scored 87 in the first half of the chase, Pakistan still needed another 113 in the second half but never looked back as both batters sprinted to half-centuries.

Moeen brought himself on for the 13th over and was flogged for 21, Babar swiping two big sixes and Rizwan adding another. Two more followed as England’s banker, Rashid, failed to stem the flow.

Babar’s hitting became more and more consistent and he overtook his partner to reached a second T20 hundred from just 62 deliveries. Wood shipped 17 from the penultimate over, allowing Babar to finish things with three balls to spare.

5 Letter Words with ASO in the Middle – Wordle Clue