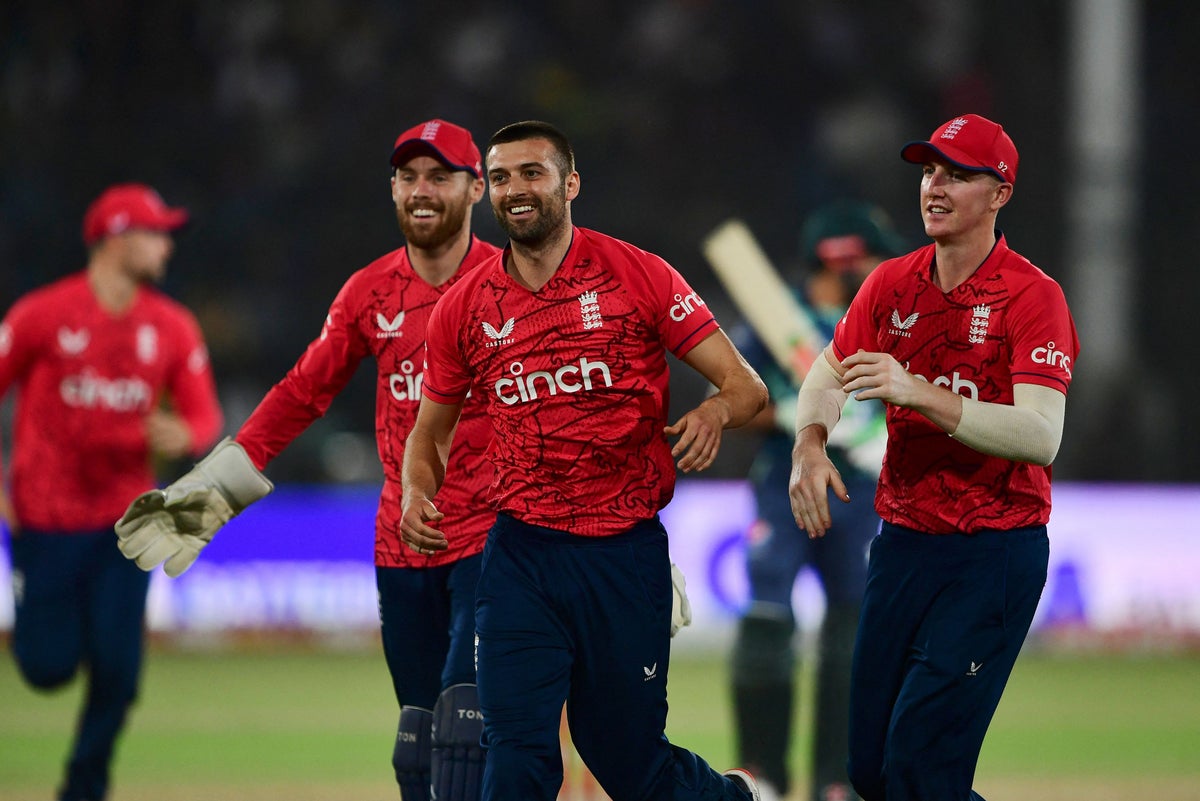 Twenty-four hours after a 10-wicket defeat in Karachi, England reclaimed a 2-1 lead in the seven-match T20 series as they waltzed to victory by 63 runs.

Defending a formidable total of 221 for three, Wood turned up the heat as he hit some of the fastest speeds ever recorded by an English bowler and picked up three for 25 from four fiery overs.

It was hard to believe the 32-year-old had not played competitive cricket since suffering a serious elbow injury in March and the only signs of discomfort came from the opposition batters, who could not cope with his skiddy pace.

The foundations were earlier laid by career-best efforts from two middle-order rookies, Harry Brook smashing 81 not out from 35 balls and Ben Duckett making 70no from 42. But Wood is more likely than either of those players to be a first-choice selection in next month’s World Cup, making him the headline act.

The early exchanges belonged to debutant Will Jacks, who struck 40 in 22 balls after being drafted in to replace the rested Alex Hales.

The 23-year-old missed out on Surrey’s County Championship title victory on Thursday but did not look like a man pining for home, announcing himself on the big stage with an action-packed contribution at the top.

With Phil Salt falling early he took the responsibility, dumping a pair of early boundaries to deep mid-wicket and unloading powerful drives down the ground. With confidence growing he stepped away and pounded Shahnawaz Dahani dismissively over cover.

His hitting helped England reached 57 for one in the powerplay, but Usman Qadir stalled things with a double strike as Dawid Malan and Jacks both picked out the leg-side sweeper.

Duckett had already helped himself to three boundaries when Brook joined him at 82 for three and they dovetailed brilliantly. Brook crashed Qadir for two sixes in four balls, reaching for the second as it was hung outside off but still sending it all the way.

While Brook showed off his power and timing, Duckett leaned into his reputation as an incorrigible sweeper and collected a series of fours that were both predictable but impossible to prevent.

Brook won the race to fifty with one big over off Dahani, threading two precise shots behind point either side of another big blow over mid-wicket. He had taken just 24 balls to reach the landmark, six faster than Duckett, who joined him a few moments later.

They pumped 43 off the last three overs, including an outstanding over-the-shoulder ramp from Brook, to assume complete control.

Pakistan’s hopes lay with their top two, fresh from a unbroken stand of 203 just a day prior, but Babar Azam and Mohammad Rizwan both came crashing back to earth, dismissed for eight apiece.

Wood needed precisely four balls to make up for lost time, Babar unable to control a rapid delivery as he flashed a head high catch to third man. Reece Topley also made a splash, knocking over Rizwan’s leg stump as he looked to make room.

Wood’s second over had even more heat and Haider Ali wanted none of it, flapping a throat ball to square-leg in what was little more than self-preservation. By the time time Iftikhar Ahmed fell to an ugly shot off Sam Curran, the score was 28 for four and the contest effectively over.

Shan Masood enjoyed a personal success, making an entertaining 66no, but Wood made short work of Haris Rauf when he returned and the game barely existed as a contest for the majority of the reply.

How to Watch Rider at Princeton in College Soccer: Stream Live, TV Channel