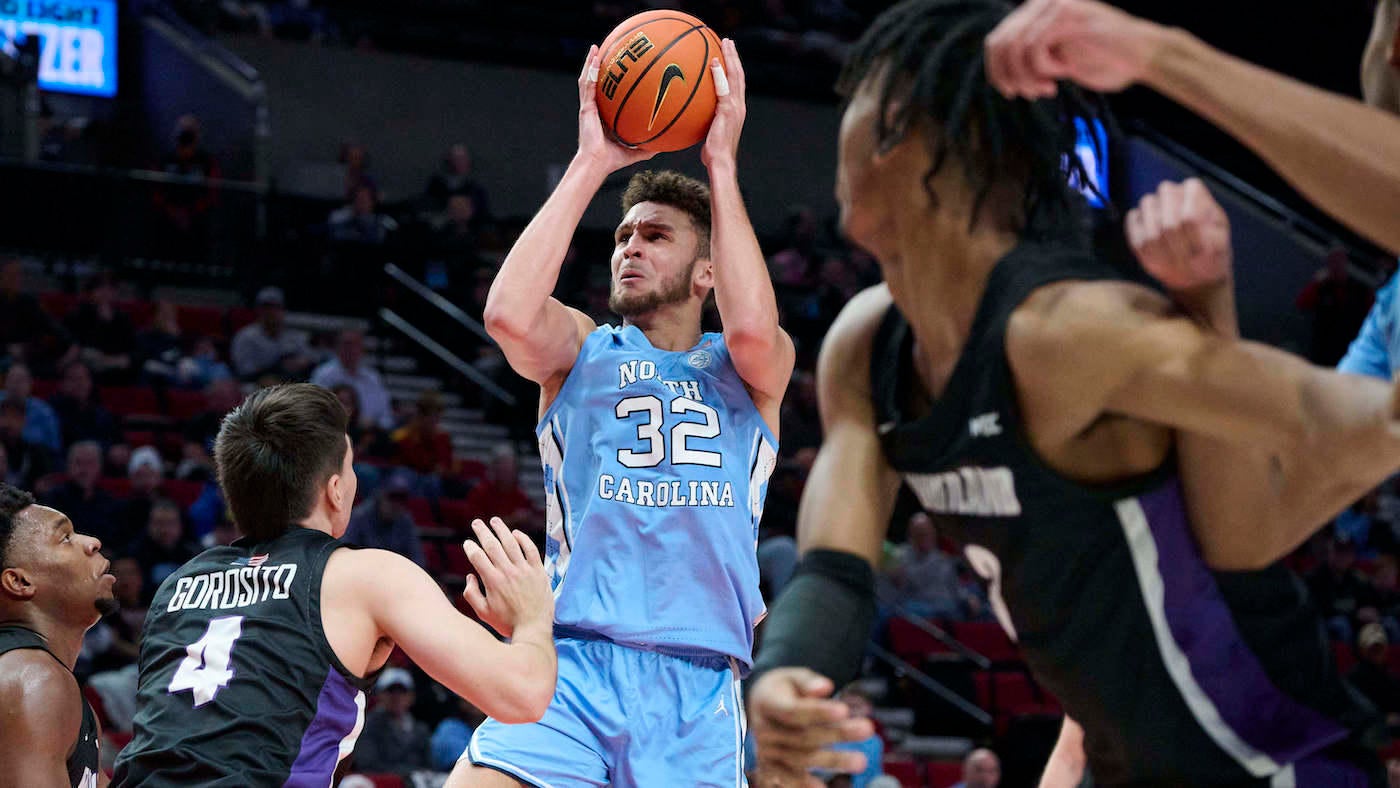 PORTLAND, Ore. — CBS college basketball insider Matt Norlander is spending Thanksgiving weekend at the PK85, covering the Phil Knight Invitational and Phil Knight Legacy tournaments. He’ll be providing updates throughout as he talks to players and coaches at college hoops’ biggest event of the regular season. Check back frequently, as this story will be updated when more results come in.

Tar Heels still yet to look, or play, like No. 1 team

This PK85 took almost no time to serve up some drama. UNC flirted with becoming the first No. 1 team since Duke in November 2019 to lose to an unranked team not in a power conference (Stephen F. Austin). The Tar Heels continued their trend of playing in competitive games against mid-major opponents. Portland led by five with 11 minutes remaining and induced 13 lead changes before UNC was able to nudge off the pesky Pilots in the final minute of a 98-91 Tar Heels victory.

UNC coach Hubert Davis was not surprised with Portland’s demeanor; he wants his team to be playing with that kind of verve, spirit and vigor. Davis also admitted that Carolina players still haven’t embraced or collectively learned how to carry the weight of being the top target not just in every game, but holding the title of No. 1 team.

“The position that we’re in, people have an expectation of how it should look,” Davis said. “And so we’re supposed to be up by 20 at halftime. We’re supposed to win every game by 30. No, we’re supposed to compete and play hard and continue to improve and see what kind of team we can become.”

Davis later added: “I think they’re trying to figure this out. I think they’ve never in their life, really, had to deal with this — the weight of other people’s expectations — and I’ve addressed it. We’ve talked about this a lot about, whether it comes from criticism or comes from praise. It’s still noise and it is of no benefit to us.”

Portland averaged 1.12 points per possession and became the second team in five games to clear 80 on UNC. The Pilots set the tone and UNC came out flat, Tar Heels senior wing Leaky Black told CBS Sports. It’s a running theme with every game so far, and he’s pretty much done with it. UNC is winning, but not winning the way it should, he said.

“Lack of detail, lack of enthusiasm, energy,” Black said. “Obviously we have the talent, we’ve got to stop coming out slow, expecting us to beat everyone because we got North Carolina across our chest and No. 1. Coming out flat is obviously not working for us and just trying to do whatever we want to do instead of what the coaches want us to do is obviously not working for us, putting us in a tough position.”

Black said there were way too many possessions where “no one’s out there talking” and the team is “just staring at each other.” Black also told me it doesn’t matter how well he plays on defense, that when the team collectively fails, it starts with him and his leadership.

The good: Northwestern transfer Pete Nance tied a career-best with 28 points for UNC. If he wasn’t in this game, the Heels almost certainly would have lost. Junior guard Caleb Love, who doesn’t shy from shooting his shot, added 23 on 10-of-15 shooting. Too much freelancing, not enough defense, though. Being in the locker room afterward, it felt like UNC players knew they couldn’t afford to play like this and get out of this tournament with three wins. Davis said as much in the postgame presser.

“In order to play for me you’ve got to have my personality,” Davis said. “I’m emotional. I’m ready to fight. I’m ready to compete. I’m ready to get after it. And as a player, if you can’t match that or you can’t mimic that or that’s something that’s not part of your personality, that’s going to be very difficult to play for me. … One of the things that I always talk about is, is there a hunger and a thirst? You’ve got to have a hunger and thirst, and I’ve told them a number of times: I’m not even close to full. I’m starving right now.”

Both Carolina blue bloods got scares, and I’d say Duke’s was a tad more worrisome. For as wishy-washy as UNC was on defense, Duke was even worse on offense. The Blue Devils won 54-51 against Oregon State but had their worst scoring output since Jon Scheyer was PLAYING for the school.

Percentage-wise, Duke managed only 26.7% from the field and 0.98 points per possession in a slog-fest possession game (55). Credit to Oregon State for mucking it up and by tossing Duke off-kilter with a zone defense look that Scheyer told me Duke hadn’t seen yet this season. Wayne Tinkle’s team has already matched last year’s abysmal win total (3) and nearly pulled off a caper on Thanksgiving.

“That’s on me to not have them ready for it,” Scheyer told me.

Why did Duke win? More bodies, perhaps. Mike Krzyzewski famously played with a short bench, but that isn’t Scheyer’s approach right now. Unheralded guys like Ryan Young and Jaylen Blakes were on the floor down the stretch, while highly touted freshmen Dariq Whitehead and Dereck Lively sat.

“We feel depth is a huge strength of ours,” Scheyer said. “And that may mean we close games out differently than how we start or, depending on how the game goes, somebody really has it going.”

Also similar to UNC, Scheyer said his team is coming out slow and it’s a habit in need of shaking. I asked him why Duke was slow off the tip; he said he honestly didn’t have an answer.

It’ll be interesting to see on Friday if Whitehead, who was the most proven scorer among Duke’s freshmen coming into school, gets more than the 17 minutes he had today.

“He can’t fall in love with his jump shot, and he’s shaking off some rust,” Scheyer told me of Whitehead. “I thought he had some really good strides today.”

While Kyle Filipowski (game-high 19 points) has been Duke’s most indispensable player thus far, the mostly young Blue Devils are in search of a go-to guy. Instead of getting that on Thursday, Duke mainly survived and held off Oregon State. There’s a lot of untapped potential with Duke. I could see this team winning the Legacy bracket just as easily as I could see it getting toppled by Xavier in Friday’s semifinals. The Musketeers uncorked their best offensive game of the season on Florida, and now X vs. Duke has potential to be the best game of the day on Friday.

Villanova’s troubles have some positive signals

No preseason Top 25 team has had a rockier start than Villanova. After losing to Iowa State 81-79, the Wildcats are 2-3 and now need to avoid stepping in it Friday against a slippery Portland team. Villanova still doesn’t have star freshman/projected lottery pick Cam Whitmore, nor is Justin Moore back from his Achilles’ injury. But the damage being done to the résumé now will have long-lasting effects come March.

That said, Villanova’s rallied from double-digit deficits at Michigan State, plus here Thursday vs. Iowa State, only to lose those two games by a combined four points. The losses burn, and Nova has often won those types of games in the past decade … but the signs are encouraging. The team has resolve. Villanova doesn’t have Jay Wright, doesn’t have maybe its two best players, but these challenges can wind up being a helpful hurdle three months from now. To be clear: I’d strongly advise against losing to Portland. Alarms will go off if VU loses Friday.

As for Iowa State, a team that made the Sweet 16 in March, T.J. Otzelberger has the Cyclones off to a 4-0 start with a familiar defense-first approach. Through four games, ISU’s 32.4% turnover rate is best in the sport. St. Bonaventure transfer Osun Ossuniyi (17 points, five rebounds, three assists, two blocks, one steal) was the most important player for ISU in the win. He’ll need to come up big again going against Armando Bacot and UNC on Friday. An event like this one is perfect for Iowa State to make noise and improve its reputation.

Xavier has the pieces to grow into a Big East challenger

Sean Miller’s team pulled away late and Xavier defeated Florida 90-83, but for the first 34 minutes or so of game time, this was the best watch of the first four tips in Portland. The Musketeers’ starters each finished in double-figure scoring, led by Colby Jones and Souley Boum each dropping 22. Boum is a firecracker. The UTEP transfer is a problem in transition and is a tough bogey to keep on the radar. Florida ultimately didn’t have answers for him, nor did UF coach Todd Golden anticipate Miller’s guys to be as effective and eclectic from 3-point range as they were. Jones, Zach Freemantle and Desmond Claude combined to shoot 6 for 7 from beyond the arc, which Golden said was the difference in the end.

“Those guys combined hadn’t made a 3 up to here,” Golden said. “[Xavier] kind of beat the scout a little bit, I would say, because we didn’t really think of them as being lethal 3-point shooters. But they were tonight.”

Florida’s 3-2 and will get Oregon State in the losers’ bracket of the Legacy tournament on Friday. That’s a tough spot for a Gators team that has potential but a lot to discover about itself. Xavier gets Duke. With the amount of size, shooting and offensive dynamism that the Musketeers have, it’s going to be interesting to see if Duke can keep pace with X. For Xavier, who will guard Filipowski? The game could easily crack into the 80s. After Thursday’s performance, the Muskies have the fourth-ranked 3-point offense in Division (45.7%).

How to Watch Big Ten Championship: Purdue vs Michigan:…

How to Watch ISPS Handa Australian Open, Final Round: Stream…