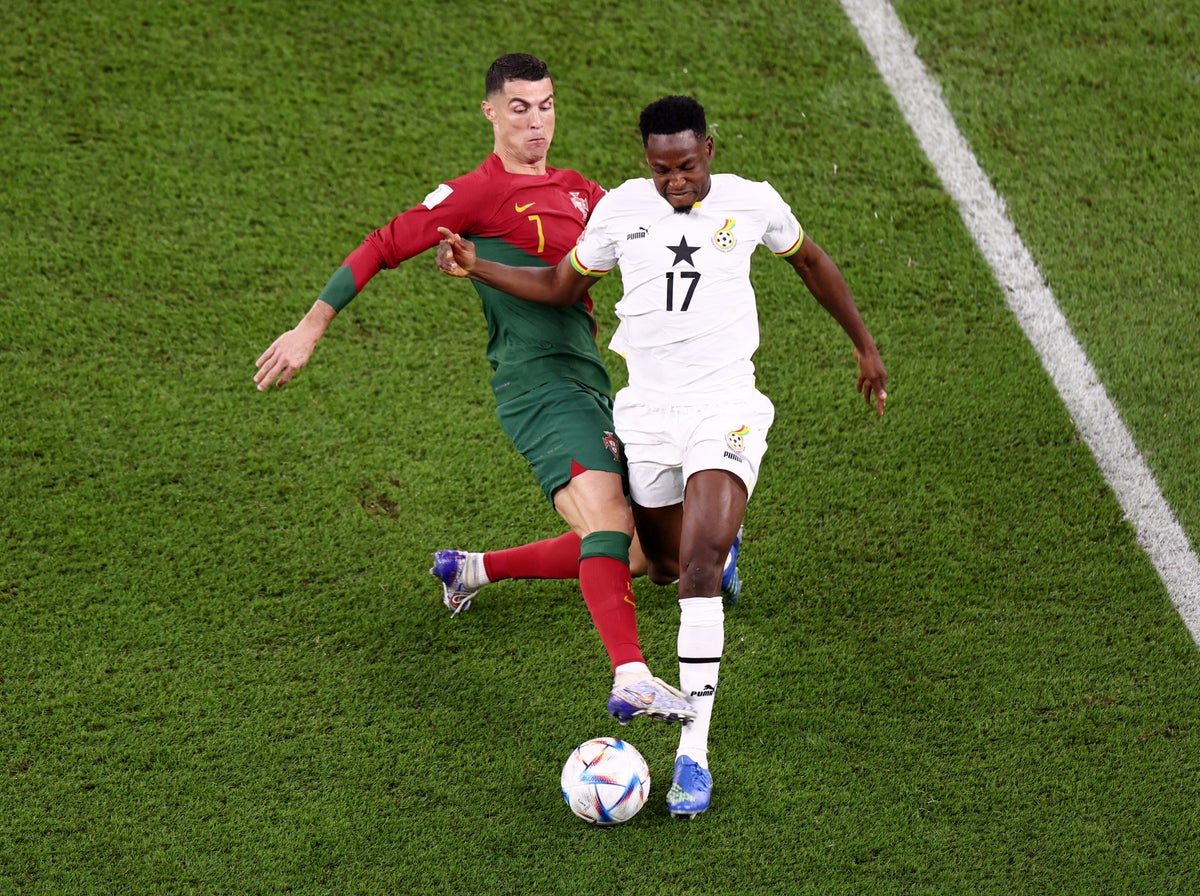 The third game of today’s World Cup action gets underway this afternoon as former European champions Portugal take on Ghana in Doha. Tipped as a comfortable win for the Selecao, anyone who was watched the early group-stage action in Qatar will know that such walkovers have been very hard to come by.

Portugal will be led by Cristiano Ronaldo once again as the 37-year-old targets a World Cup in what could be his last trip to the tournament. In fact, the nation has never lifted the prestigious trophy as they start their Group H campaign perhaps a step behind the favourites in 2022.

Ghana overcame Nigeria in qualification for the World Cup and will rely on the experienced Ayew brothers plus newer faces such as Tariq Lamptey. The Black Stars have reached the knockouts twice on their three attempts. ITV will broadcast this game on TV and you can follow all the action LIVE via Standard Sport’s match blog!

4 mins: The full-backs are very high in possession for Portugal and Cancelo puts a first cross in from the left but cannot steer it into the box, and a corner is given.

Guerreiro’s ball in lands to Otavio on the edge of the box and he drags a shot well wide.

2 mins: Ghana as expected start with a flat back fine, Ayew joining Williams in pressing from the front.

The first pass into Ronaldo sees him trip Reading left-back Rahman to concede a free-kick.

After Ronaldo and Ayew oversee the coin toss, with referee Ismail Elfath of MLS we kick off!

PS. Apology to the historians following us, as of course the 1400s was Portugal’s golden age of exploration. Anyway, on with the game…

The national anthems play out

Something about ‘A Portuguesa’ just makes me want to hop on a boat in the 1600s and go exploring the Atlantic.

It’s time for the third game of the day as Portugal and Ghana get their World Cup campaigns underway.

Cristiano Ronaldo leads out the Selecao ahead of playing in his fifth World Cup – a very exclusive club of only five other players,

The atmosphere is building!

Some great fans in the stadium ready for this one.

In fact, their only meeting came at the 2014 World Cup group stage as Cristiano Ronaldo hit his 50th national goal to win the game late on.

Not a huge celebration though, as both teams were knocked out with the result!

Ghana out to represent Africa

Even with a couple of promising draws to their name, the four African teams to have played before Ghana at this World Cup are yet to score…

Will that change this evening?

We’re just half an hour away from kick-off in Doha!

With 974 recycled shipping containers making up its construction, today’s venue is said to be the first reusable World Cup stadium.

That means there are plans to take it down and build it back up again in Uruguay if they win their bid to host the 2030 tournament.

Furthermore, 974 is Qatar’s international dialling code. The more you know!