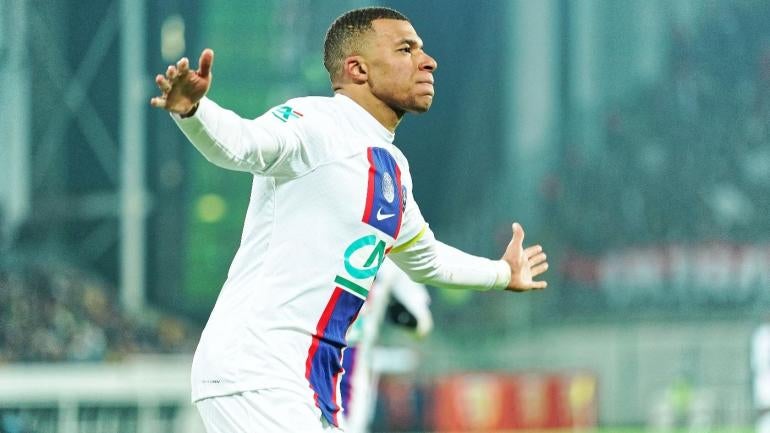 Kylian Mbappe scored five goals as Paris Saint-Germain thrashed sixth-tier side Pays de Cassel 7-0 at RC Lens’ Stade Bollaert Delelis in the Coupe de France round of 32 on Monday. The French superstar grabbed a first-half hat-trick and a second-half brace and even had time to tee up striker partner Neymar for good measure against amateur opponents. Both Mbappe and Neymar went the full 90 minutes.

Mbappe’s quintuple is a first in PSG club history and it also moves him to within four goals of all-time leading scorer Edinson Cavani, who tops the list with 200 goals. Fellow superstar Lionel Messi was given the night off for this match.

“Kylian is a goal scorer,” said head coach Christophe Galtier after the game. “He is obsessed with scoring — clearly. He scored quite a few last year, 56 or something for the calendar year. It was important that he and Neymar played the whole game here.”

PSG’s reward for respecting their opponents — the lowest-ranked side left in the competition going into the game — is a matchup against bitter rivals Olympique de Marseille next.

Pays de Cassel held out for almost 30 minutes before Mbappe opened the scoring with a deflected finish from a Nuno Mendes assist and that opened the floodgates before the break.

The Frenchman provided for Neymar to squeeze in the visitors’ second just four minutes later before Mbappe lobbed in his second and PSG’s third within 60 seconds of the restart.

Six minutes later and the 24-year-old had completed his treble with a crisp finish as the Northerners fell apart and started to make numerous mistakes.

Mbappe needed 11 minutes to notch Les Parisiens’ fifth of the night and his fourth from a Neymar assist after a goalkeeping howler and Carlos Soler nonchalantly backheeled home a sixth soon after.

The Spaniard turned provider 11 minutes from time as Mbappe wrapped up the scoring with a back-post finish and Galtier’s men showed mercy from there.

By the time PSG travel to Stade Velodrome to face despised rivals Marseille in Le Classique in early February, Mbappe may well have already equaled or possibly broken Cavani’s record.

Galtier also confirmed that his star No. 7 is also vice-captain of the team behind skipper Marquinhos, who was rested as an unused substitute for this one.

Leaves in a hurry Crossword Clue