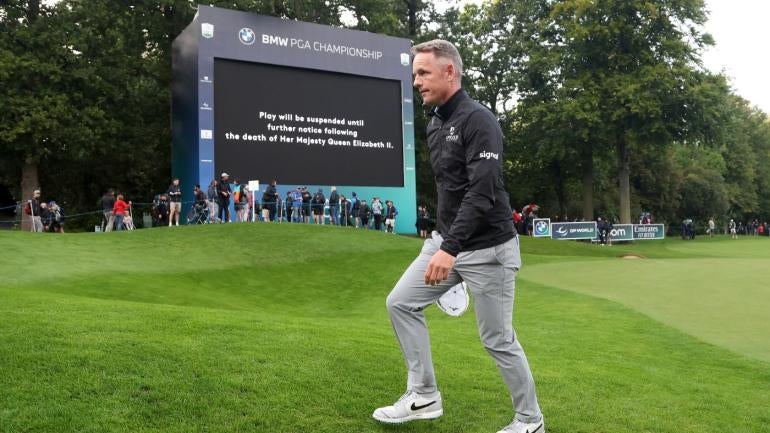 The death of Queen Elizabeth II, Britain’s figurehead for the last seven decades and longest serving monarch, is reverberating throughout the world including in sports. The golf community is also reacting to her death Thursday at 96 with play at the 2022 BMW PGA Championship in Surrey, England — the DP World Tour’s flagship event — suspended for Thursday and Friday with a decision on resuming play to come later.

“On behalf of our members and everyone connected with the European Tour group and the BMW PGA Championship, it is with great sadness that we have learned of the passing of Her Majesty Queen Elizabeth II. She truly was an inspiration to people the world over,” the DP World Tour released in a statement.

“Out of respect for Her Majesty and the Royal Family, play has been suspended at the BMW PGA Championship at Wentworth Club for the remainder of Thursday and flags at Wentworth Club will be lowered to half-mast. Furthermore, no play will take place at BMW PGA Championship on Friday and the golf course and practice facilities will be closed. Further updates on the resumption of play will be provided in due course. Our deepest sympathies and condolences are with the Royal Family at this time.”

It is unknown whether the tournament will proceed on Saturday as a 54 or 72-hole event — or even at all — as a trio of Europeans share the top spot on the leaderboard after Thursday’s action. Tommy Fleetwood, Andy Sullivan and Viktor Hovland all signed for opening rounds of 8-under 64 to kick off their BMW PGA Championships as Wentworth Club proved to be defenseless following heavy rains in the area.

World No. 3 Rory McIlroy — the highest ranked player in the field — carded a 4-under 68 to sit T11 following his dramatic come-from-behind victory at the 2022 Tour Championship. Playing in the BMW PGA Championship for the first time since 2019, McIlroy shares this position on the leaderboard with defending champion Billy Horschel among others.