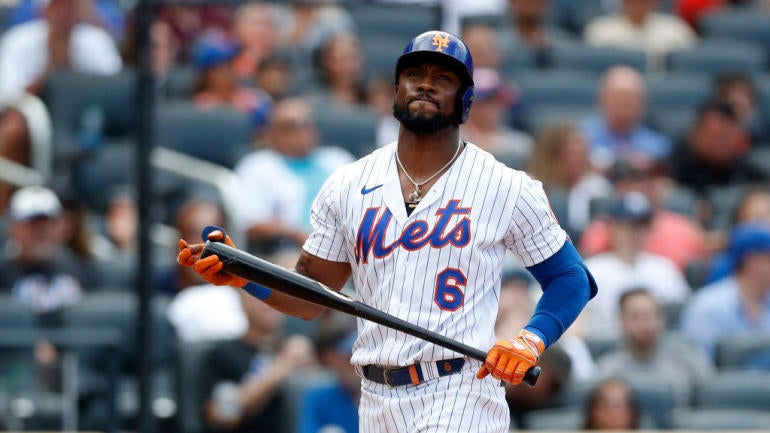 New York Mets outfielder Starling Marte has a partial non-displaced fracture in his right middle finger, the team announced Wednesday. He is considered day-to-day. Marte suffered the injury when he was hit by a pitch Tuesday night against the Pittsburgh Pirates.

Here is the hit-by-pitch. Marte initially remained in the game and played another inning in the field, then was removed.

“At first, I felt the pressure of where the pain was going to be, and then when I was out there (in the outfield) I felt like I couldn’t throw and that kind of led me to talk to the team trainer and at that point they took me,” Marte told SNY after the game. He went for imaging Wednesday.

Marte, 33, is in the first year of a four-year, $78 million contract. He entered play Wednesday with a .292/.347/.468 batting line with 16 home runs and 18 stolen bases, which was enough to earn him his second career All-Star Game selection.

Trade deadline addition Tyler Naquin figures to handle right field duty while Marte is sidelined, at least against right-handed starters. Darin Ruf in left and Mark Canha is another possibility. For now, the Mets seem intent on keeping Marte on the active roster rather than placing him on the injured list.

The Mets entered play Wednesday tied with the defending World Series champion Atlanta Braves atop the NL East with identical 85-51 records. New York had been in sole possession of first place since April 11 prior to Tuesday’s loss.