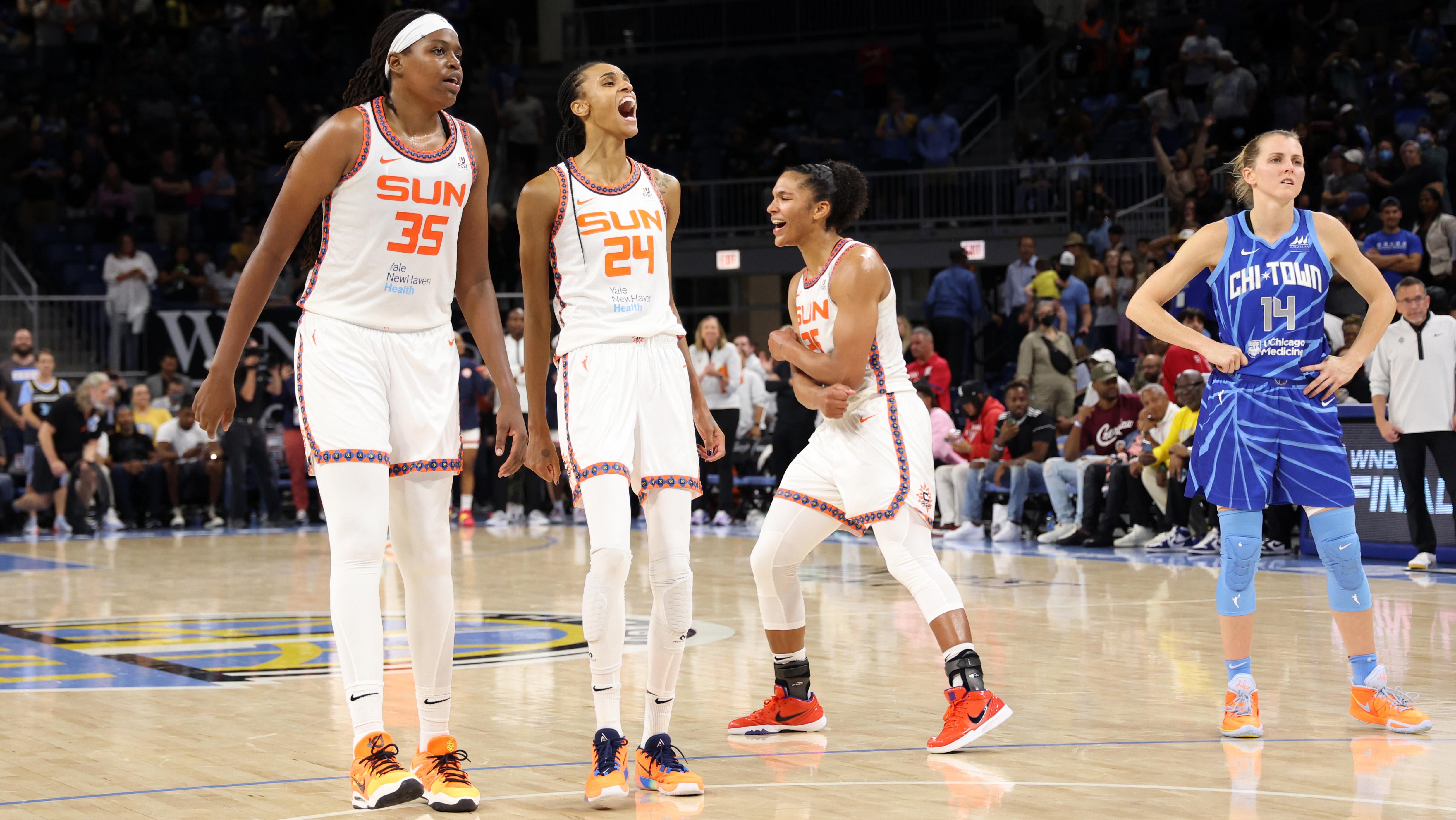 CHICAGO — Odyssey Sims walked down the sideline and cupped her hand to her ear like a WWE wrestler listening for the roar of the crowd, but nothing was coming back her way. Stunned by what they had just witnessed, most inside Wintrust Arena had fell silent. Only the Connecticut Sun and their small legion of supporters were making any noise.

Over the final seven minutes and 20 seconds of Thursday night’s winner-take-all Game 5 in the semifinals, the Sun outscored the defending champion Chicago Sky 22-2 on their home floor to win 72-63 and steal a trip to the WNBA Finals. It was a comeback so stunning and improbable that even those involved were having trouble processing it in the immediate aftermath.

Sun assistant coach Brandi Poole was lost for words as she bounded out of the locker room along with the rest of the joyous coaching staff and hugged members of the team’s traveling party. “I don’t know how that happened,” she said.

The sense of disbelief was just the same in the opposing locker room. “It’s tough,” Sky head coach James Wade said. “It’s probably one of the biggest disappointments I’ve had professionally. It’s hard to put into words right now … This is probably gonna hurt me for a long time.”

In a contest befitting this series, Game 5 was a true scrap that was less about basketball skill and execution and more about guts and pride and determination. The former may be an issue at times for the Sun, but they proved they have plenty of the latter.

After a disastrous third quarter in which they had as many points, eight, as turnovers, the Sun then fell behind by 11 early in the fourth. They could, and probably should have been done, and were a few minutes away from facing another early playoff exit and an offseason full of difficult questions. It was at that point they decided to make a stand. Instead of letting things spiral, they focused on the positives, vowed to work harder than the Sky, and started chipping away little by little.

Finally, with just under four minutes to play, they found their breakthrough. On the second of two offensive rebounds on one possession, DeWanna Bonner converted an and-one and let out a scream. Kahleah Copper didn’t enjoy the show of emotion, and the two got into it, exchanging words and a brief shove.

The referees reviewed the situation and didn’t add any additional punishment, likely because assessing a double technical would have ejected Copper (who was already on a technical) from the game. But while the Sky got lucky with the refs’ decision, the damage had already been done.

“I think the momentum changed with the whole Copper exchange and review,” Alyssa Thomas told CBS Sports. “That right there was everything we needed to give us the final push. After that, there was no looking back.”

The Sun didn’t allow a single point the rest of the way, overwhelming the Sky with relentless defensive pressure during their final charge. They came up with numerous impressive defensive plays, including a monster rejection by Jonquel Jones that started the fastbreak that tied the game with 2:24 to play. After Natisha Hiedeman outworked Courtney Vandersloot for a loose ball on the ensuing possession, Jones converted an and-one to put the Sun in front for good.

“Yeah, that was a gut check,” Jones told CBS Sports. “That was a test of resilience, a test of the team’s mindset and attitude. It means a lot, not just because of the way that we won, but the team that we beat – the team that’s the former champions and a really tough team. For us to go out there and impose our will and when things weren’t going our way to stay together, it was a big growth moment for us as a team.”

Over the final 7:20, the Sun shot 7 of 12 from the field and 8 of 8 from the free throw line. On the other end, they forced three turnovers (four if you include the jump ball they forced then won when the Sky had possession), blocked two shots, and limited the Sky to 1 of 11 from the field.

Now, they’re on to the Finals for the first time since 2019, and the fourth time in franchise history; the team’s first title is once again within reach, but they’ll have to go through the No. 1 seed Las Vegas Aces to get it.