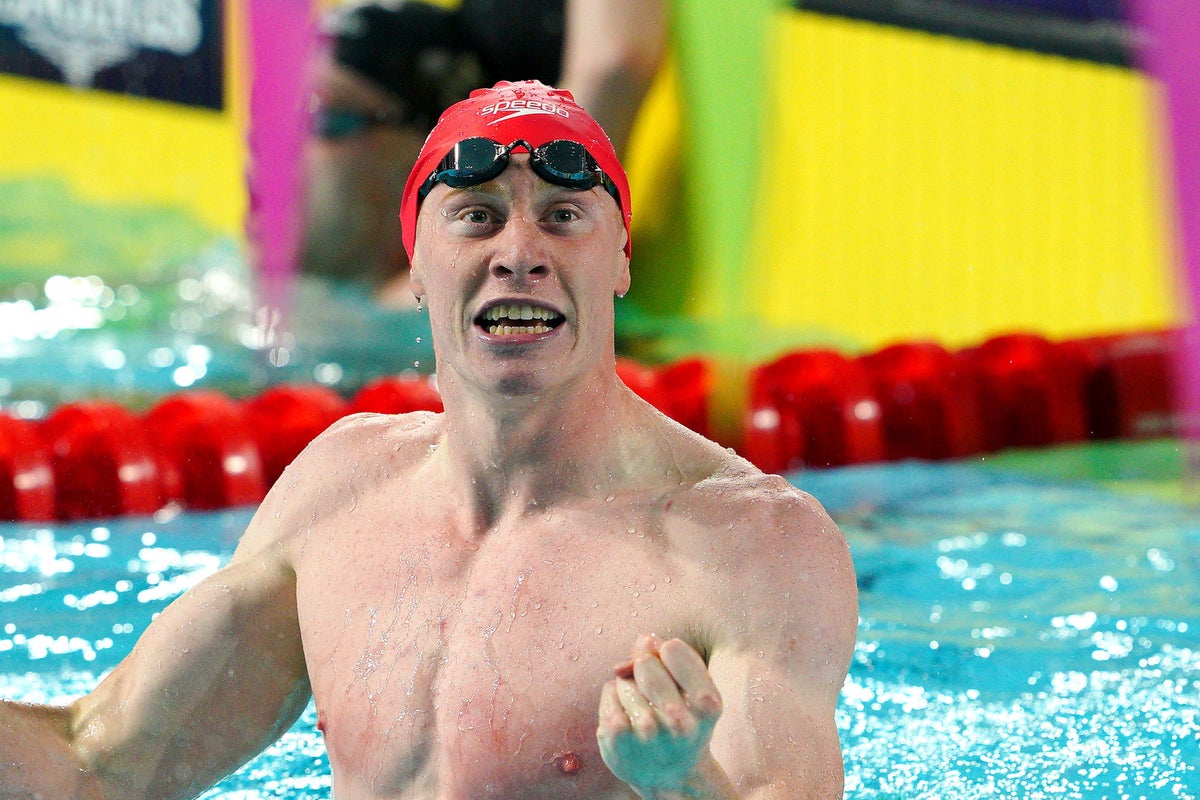 om Dean became England’s most decorated athlete at a single Commonwealth Games, walking away from Birmingham with a “special” gold after six successive silver medals.

Dean was again beaten by Duncan Scott in the men’s 200 metres individual medley on Wednesday night, having also been pipped by his friend and rival over the same distance in the freestyle at the weekend.

But alongside Brodie Williams, James Wilby and James Guy, Dean finally got his hands on Commonwealth gold as England finished eight hundredths of a second ahead of Australia in the men’s 4x100m medley relay final, with Scotland completing the podium positions at a raucous Sandwell Aquatics Centre.

The previous English record for most medals won at a Games held jointly by Brian Brinkley, Mel Marshall and Siobhan Marie O’Connor was therefore broken by Dean, who made it lucky number seven after just edging out Kyle Chalmers in the freestyle leg to get his team home in three minutes and 31.8 seconds.

The double Olympic champion said: “Finally, six silvers and one gold. That was such a sweet way to finish what has been an incredible week. The big number seven this week, which is so special.

“Silvers are incredible. I’m so pleased to walk away with that many silvers but we are competitive people by nature, it’s in our DNA, so it does sting slightly when you are so close to getting that gold. That’s why I am so glad it came together here.”

Dean scooped a famous Olympic gold in the men’s 200m freestyle last year, edging out Scott, who has gained a measure of revenge in recent days with two individual wins over the Londoner.

Scott hit the front early on the final night of swimming at these Games before clocking a winning time of one minute and 56.88 seconds, withstanding a late charge from Dean, who finished 0.13secs behind after surging up the leaderboard, having been seventh at halfway following a poor backstroke leg.

“I can’t seem to get away from that man out there,” Dean chuckled. “I knew he would want to come to England and stamp his name as a Scot. This was such a big thing for the Scots.

“Every race I’ve done since the Olympics, you feel like you’ve got a target on your back. You know what, I wouldn’t have it any other way. It means I’ve done something great in the sport.”

While Dean collected three individual and four relay gongs at Birmingham 2022, Scott has two golds and four bronzes, taking his overall record to a Scottish record 13 medals in three appearances.

“Rivalries or competition get the best out of us,” Scott said. “He’s Olympic champion in the 200m free, faster than me on the 100m free. Great racer, great competitor. I knew he’d be coming home fast.”

Ben Proud followed up his men’s 50m butterfly gold with victory in the freestyle, his third successive title in the event after a time of 21.36s, with English team-mate Lewis Burras 0.32s behind in second.

Proud also won the event at June’s World Championships and was happy to bounce back after finishing joint fifth at Tokyo 2020, saying: “So much has changed. This is really my redemption year.

“Something has clicked and I’ve finally understood how to swim quicker in finals. I managed to hold off the young guns for one more year.”

There was more joy for Northern Ireland as Daniel Wiffen took silver in the men’s 1500m final, where England’s Luke Turley was a bronze medallist, while England finished third in the women’s 4×100 medley relay final.

Emma McKeon – whose personal life has been under the microscope over the last week amid speculation she and Cody Simpson had fallen out with Chalmers – helped Australia to victory as she topped the individual medals table with six golds, a silver and a bronze.

How to watch Christopher Eubanks vs. Frances Tiafoe at the Citi Open