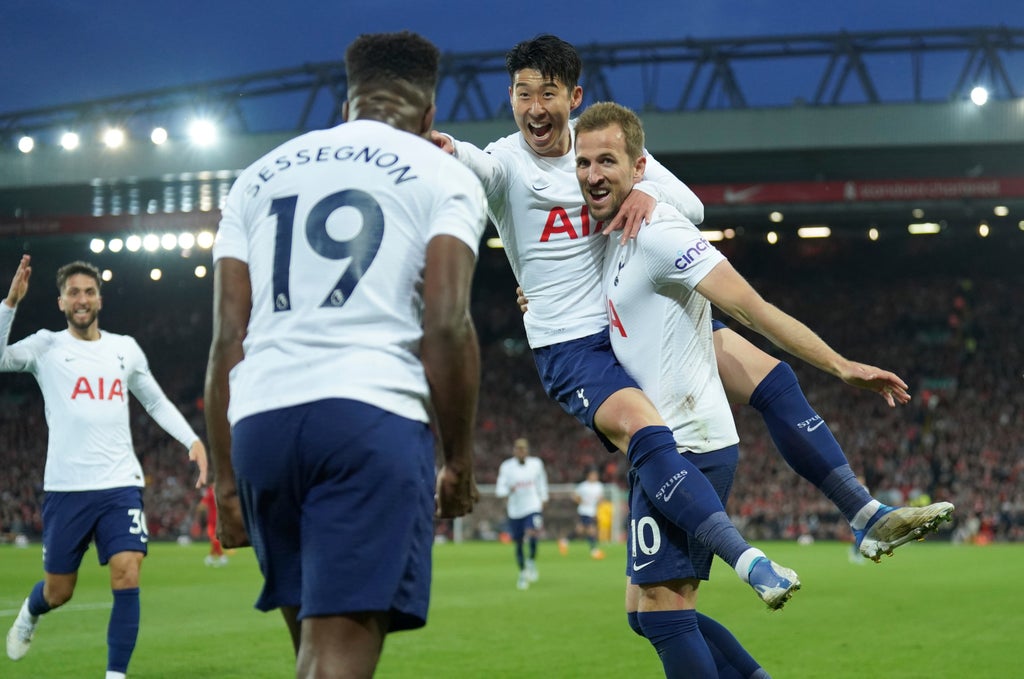 ottenham’s 1-1 draw at Anfield derailed Liverpool’s bid but ensured a top-four finish in no longer in their hands.

Nonetheless, there was only one deflated team at the final whistle, as a hard-earned point against Jurgen Klopp’s quadruple-chasing side ensured Spurs should go into Thursday’s pivotal north London derby with enormous belief.

Arsenal will start that game five points clear in fourth place if they beat Leeds on Sunday but Spurs can be confident of reducing that gap ahead of the final two games if they compete with the same discipline and commitment they showed on Merseyside.

Heung-min Son’s strike just before the hour set them on course for a memorable smash-and-grab, and a first win at Anfield since 2012, but they were pegged back by Luis Diaz’s deflected strike 15 minutes from time.

Spurs withstood a late barrage but Hugo Lloris did not have a serious save to make in the second half, such was Spurs’ committed rearguard, while they had chances to win, with Pierre-Emile Hojbjerg miscuing a header in stoppage-time with Harry Kane lurking in the box.

Perhaps the visitors could have been more adventurous and tried to exploit the space left by Liverpool in the final minutes but they would have to win on Thursday even if they had taken three points here, and going into the derby on the back of a confidence-boosting draw could yet be a huge factor in the race for fourth.

If a point here is ultimately not enough for Spurs at the end of the season it will not be this game they look back on with regret but the matches against Brighton and Brentford, when they took just a point and ultimately squandered their lead over Arsenal.

This performance was another demonstration that Conte is building a side who can compete with the best in the country on their day.

It ensured Spurs finish the season unbeaten against the top two, having beaten City home and away and now drawn twice with Liverpool.

Conte and Klopp both acknowledged pre-match that Liverpool’s approach may present opportunities for Spurs on the break, and so it proved as the match played out exactly as many had predicted.

Liverpool dominated possession and attempted to suffocate Spurs with their relentless pressing, while the visitors set up in a 5-4-1 without the ball and bravely played out from the back, while looking for opportunities on the counter-attack.

It was a risky approach but it worked, and the first half was a tale of Liverpool dominance punctuated by a series of promising breaks from the visitors.

The game was best summed by a passage of play moments before the half-time whistle, when Liverpool nearly converted a spell of pressure through Diaz’s stinging effort. Lloris got down quickly to palm the ball away and from the resulting counter-attack, Hojbjerg struck the post from 30 yards with a fine effort.

The second half was more one-sided as the Reds camped in Spurs’ half, roared on by a ferocious home crowd.

But Spurs still found space on the counter-attack, and stunned Anfield when Son converted Ryan Sessegnon’s cross at the back post after fine work from Kane.

Klopp introduced Diego Jota for Jordan Henderson as Liverpool went gung-ho and they got their equaliser when Diaz’s effort took a cruel deflection off Rodrigo Bentancur and found the corner. Spurs stood up to the subsequent barrage and had their chances to win it in transition.

Conte will feel vindicated by another well-executed game-plan, which again proves Spurs are the perfect side to play against opponents who love to dominate the ball. There is still work to do in breaking down more defensive sides but Conte’s set up worked on the day to earn a potentially important point.

Tottenham’s whole back five deserved credit for an imperious rearguard, which ensured Lloris barely had a save to make in the second half.

It was a collective effort but if one player caught the eye, it was Emerson Royal, who had his best game for the club at right wing-back.

So often a weak link in Conte’s side, Emerson barely put a foot wrong, attacking with purpose and defending resolutely against the twin threat of Diaz and Andy Robertson. It was testament to Emerson’s display that Robertson was replaced early after failing to really get into the game.

Right wing-back is the first position Conte would like to upgrade in the summer but Emerson’s performance suggested he could still be an important part of this squad in future.