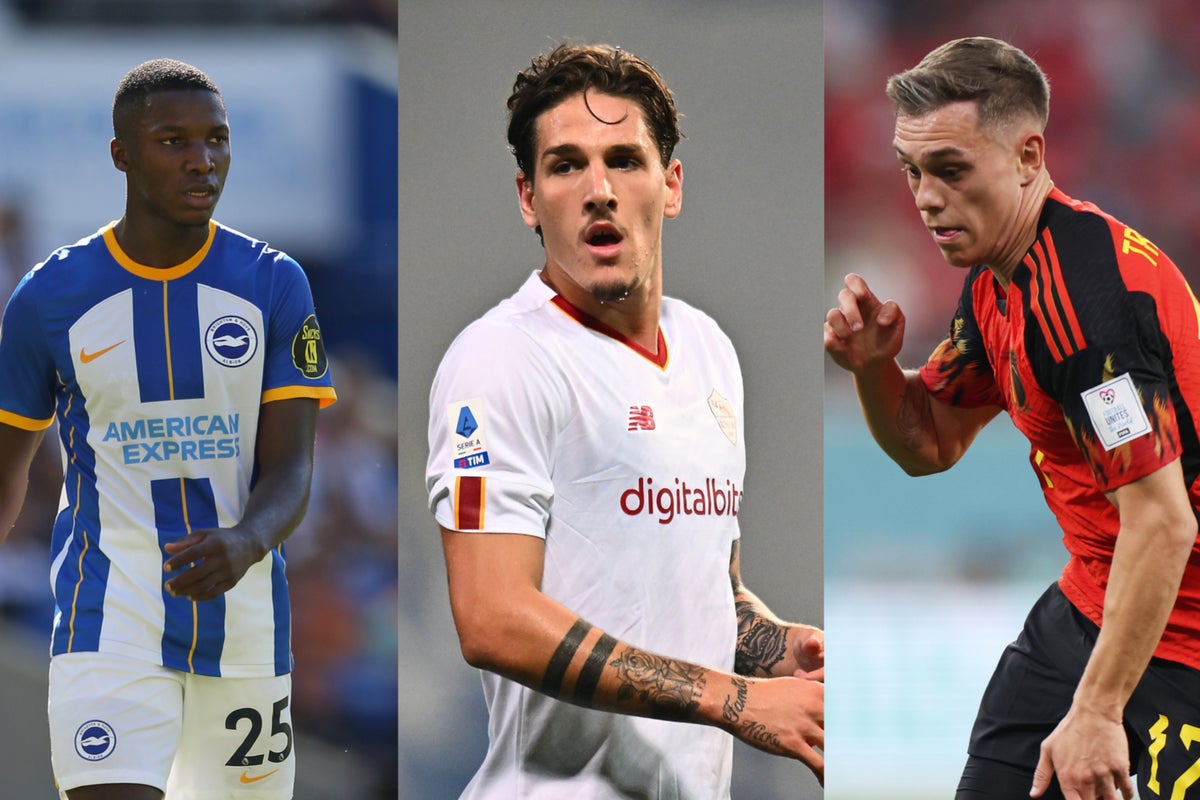 There is less than a week left in the January transfer window and all three of Arsenal, Chelsea and Tottenham are expected to be busy. Despite leading the Premier League, the Gunners have already snapped two players in the form of Leandro Trossard and Jakub Kiwior but are now said to be interested in midfielders.

Juventus star Weston McKennie has been linked but perhaps the bigger name is Brighton’s Moises Caicedo. The latter has already been the subject of a £55m offer from Chelsea, who are now thought to be pushing to sign Argentina star Enzo Fernandez once again amid reports of an £87m offer from Stamford Bridge.

Over at Tottenham, there is thought to be a fresh round of talks over the potential signing of top target Pedro Porro scheduled this week, while links with Nicolo Zaniolo continue. Follow all of the latest news, gossip and rumours below!

Ivan Fresneda is a man in demand.

The Valladolid right-back has been linked with all of Newcastle, Arsenal and Borussia Dortmund this month, while the 19-year-old is yet to rule out the idea of staying in Spain.

Dortmund, however, are thought to be leading the chase.

Still, the Daily Mail claim Arsenal have now matched their offer of £13m as the race to sign Fresneda hots up.

Malo Gusto has been the latest name linked with Chelsea as the club bid to bring in options to back-up Reece James.

The Lyon teenager is seen as a hugely exciting prospect and the Blues are reportedly eager to land him between now and the end of the month.

According to RMC Sport, the Old Trafford giants could hijack the move despite Gusto agreeing terms with Chelsea.

As such, the Dane has been linked with some of the biggest jobs in England, though did only recently sign a contract extension in west London.

Still, that seemingly hasn’t stopped the admiring glances from elsewhere.

According to Football Insider, Everton have made an approach to speak to Frank following the sacking of Frank Lampard, though Brentford have turned it down.

Nicolo Zaniolo has been linked with Tottenham for almost a year now and the Italian is seemingly keen on the idea of a move to north London.

In fact, the attacking midfielder could have already endeared himself to Spurs fans.

That’s because, according to Get Italian Football News, the Roma star has rejected London rivals West Ham in an effort to force a move to Spurs over the line.

Chelsea have reportedly made an offer of £87m to sign top target Enzo Fernandez.

The club’s move to sign the Argentina star looked to have broken down earlier this month but there appears to have been a U-turn.

Benfica midfielder Fernandez is the club’s top target, though the Lisbon giants have long-insisted he will not leave for less than his £106m release clause.

Portuguese outlet Record, however, claim Chelsea have now bid £87m PLUS two players in return for the 21-year-old.

With Arsenal having strengthened both their attacking and defensive options already this month, it seems the midfield is next on the list.

Juventus and USA Weston McKennie continues to be linked, however, the Gunners could yet give Chelsea a taste of their own medicine.

Indeed, Fabrizio Romano has revealed the Premier League leaders are interested in a move for Brighton’s Moises Caicedo, a player the Blues have seen a £55m bid rejected for.

Pedro Porro has been linked with Tottenham pretty much all month, with Antonio Conte clearly desperate to strengthen his options at right-wing back.

Still, Sporting have insisted throughout Spurs’ chase that the Spanish international simply will not be leaving for less than his release clause, which is believed to be worth around £39m.

Fabrizio Romano, however, has revealed Spurs are to hold fresh talks with the Lisbon giants and are prepared to go as high as £32m.

Chelsea are now seemingly hell-bent on signing a new midfielder as their crazy month of spending continues.

Enzo Fernandez is believed to be on their radar once again, along with Brighton’s Moises Caicedo.

According to the Guardian, the Blues could now submit a fresh offer to sign Caicedo, having already seen a £55m bid rejected.

They claim a new move could be launched soon.

With two news players already through the door, things do not look like slowing down for Arsenal.

Favourites to win the Premier League for the first time in 19 years, the club’s board seemingly aren’t looking to let this opportunity pass them by.

Indeed, the Gunners remain active in the transfer market and could now move for Juventus midfielder Weston McKennie.

The American could leave the Italian giants due to all of the off-field uncertainty and, according to Gazetta dell Sport, the Gunners have now launched a bid to sign him.

According to Relevo, Milan are offering €20m, which is far less than the €35-40m Roma want to sell the player.

Milan are happy to play the waiting game with Zaniolo keen to leave the club. Tottenham are monitoring the situation.

Where some carry a chip 7 Little Words Answer