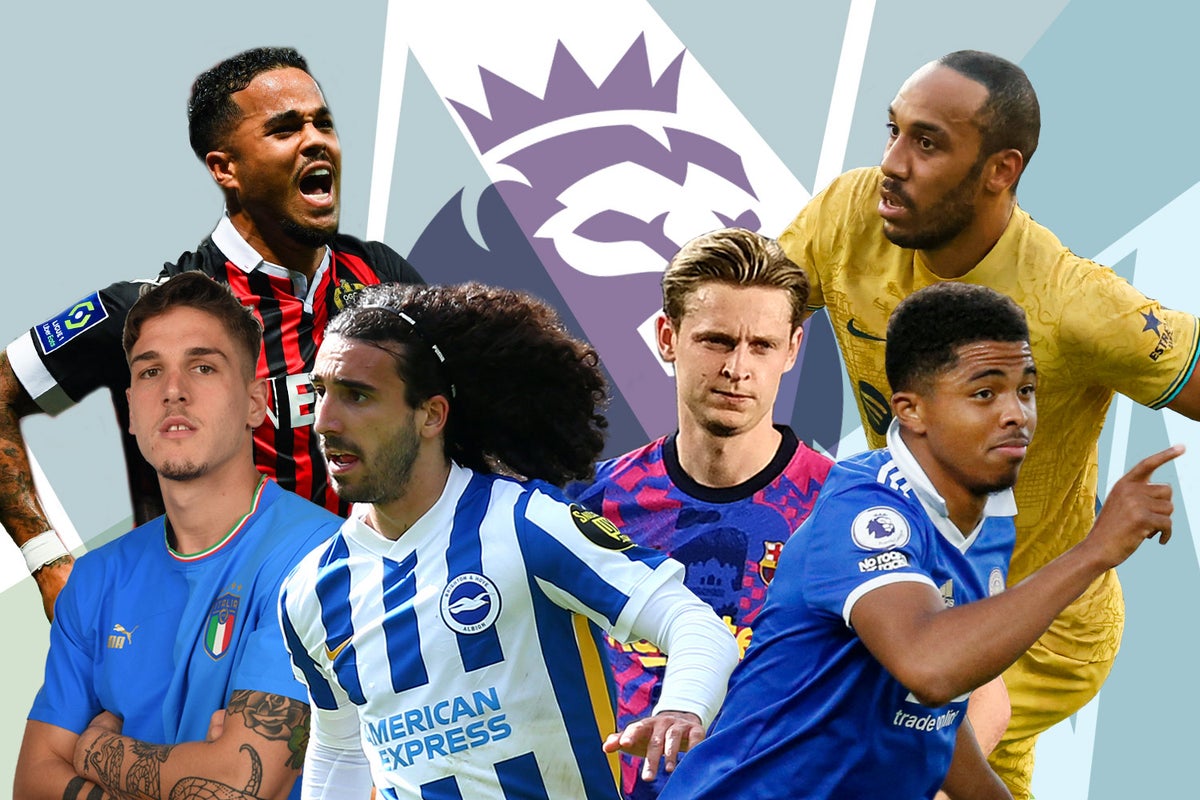 The new Premier League season is underway and Chelsea, Arsenal and Tottenham remain among the busiest clubs of the summer window. At Stamford Bridge, Marc Cucurella has been signed for £62million and Wesley Fofana could soon join him if Thomas Tuchel gets his way, despite a £70m bid being rejected by Leicester. Marcos Alonso, meanwhile, is set to join Barcelona.

Arsenal manager Mikel Arteta has confirmed that he is not done in the market, despite spending more than £120m, with Leicester’s Youri Tielemans in mind, with a fresh boost potentially arriving on Friday as the Foxes chase Houssem Aouar. Lucas Paqueta has also been linked with the Gunners, who face a battle with Manchester United for Cody Gakpo.

Tottenham have made six signings so far this summer and Udinese left-back Destiny Udogie, who is thought to have been personally recommended by one Antonio Conte, will become the seventh in a £21m deal after personal terms were agreed. Conte reportedly wants three more before the end of the window on September 1, with Nicolo Zaniolo, Memphis Depay and Pau Torres all linked. Follow all the latest transfer news, gossip and rumours below!

One of David Moyes’ key transfer targets was watching Everton in action as he prepares to join.

Thomas Tuchel confirmed Chelsea were still active in the transfer market after watching his side beat Everton on Saturday.

While he wouldn’t be drawn on any names, the club continue to be linked with a number of big European stars.

According to Spanish outlet Sport, the club have made a £59m bid for Barcelona’s Frenkie De Jong and are convinced the player wants to join them…

Thomas Tuchel has confirmed that Marcos Alonso asked to be left out of the squad for Chelsea’s 1-0 win over Everton at Goodison Park.

The Spain international wasn’t in the 20-man squad that travelled to Merseyside with Barcelona in talks to sign the left wing-back.

The Blues boss didn’t confirm whether Alonso will leave amid ongoing negotiations but he revealed that 31-year-old asked to not play against Frank Lampard’s side.

One of the stars of Euro 2020, Brentford are closing in on Christian Eriksen’s replacement…

Marco Silva saw his Fulham side but an impressive performance against Liverpool today, although did appear downbeat on the club’s lack of transfer business before kick-off.

According to Football Insider, Silva might have reason to smile even beyond today’s draw.

They claim the club have agreed a deal with Leicester over a move for Jannik Vestergaard.

It’d be fair to say Aaron Wan-Bissaka has struggled for much of the past two seasons.

While much was expected of the defender upon his £50m move to Manchester United, the 24-year-old has seen his stock drop at Old Trafford.

According to Sky Sports, Crystal Palace are eyeing a move for the former player in a move that could relaunch his career.

Tottenham are poised to complete their seventh signing of a busy summer transfer window.

We reported earlier that they were hoping to wrap up a deal for young Italian left-back Destiny Udogie next week, before loaning him back to Udinese for the season.

Now Fabrizio Romano reports that Spurs have a full agreement on personal terms with the teenager, who will pen a five-year contract in north London.

Arsenal have been strongly linked with the PSV Eindhoven star as they look to continue strengthening their squad for a top-four battle under Mikel Arteta.

However, the Daily Mirror report that Erik ten Hag has now added the 23-year-old Dutch winger to his transfer wishlist at Old Trafford amid the ongoing uncertainty over Cristiano Ronaldo’s future.

A number of exits appear to be looming at Arsenal as Mikel Arteta continues his clear-out of unwanted players.

It’s being reported that Lucas Torreira is now set to join Galatasaray, having signed a contract in Milan last night.

Arsenal are set to receive €6m/€7m plus add ons for the Uruguayan, who spent last season on loan at Fiorentina.

Meanwhile, Hellas Verona are rivalling fellow Italian club Monza in the race for Pablo Mari, having submitted an offer for a permanent transfer.

Mr Romano is now reporting that a deal has been successfully struck over personal terms with Mikkel Damsgaard.

Brentford saw a £16.7m offer for the 22-year-old accepted by Serie A Sampdoria earlier this week.

Damsgaard is now set to arrive in London next week to sign his contract and undergo a medical.

The Bees have their replacement for Christian Eriksen it seems. One Dane in, one Dane out!