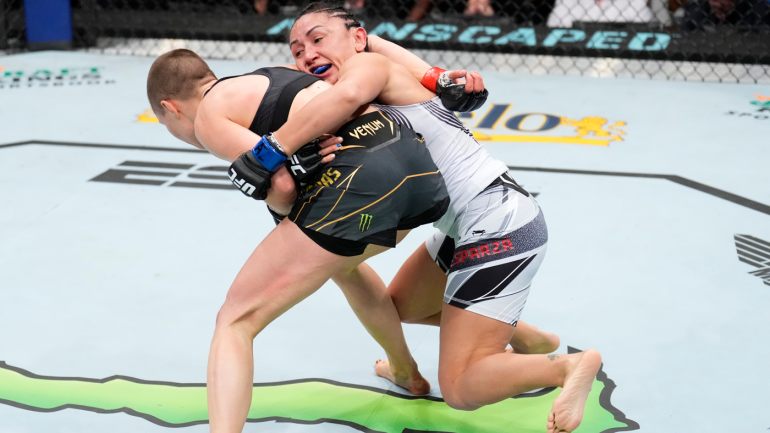 Rose Namajunas entered UFC 274 looking not only to retain her strawweight title but also to avenge a 2014 loss to Carla Esparza. What on paper was an intriguing grudge match between two tremendous fighters ended up playing out as one of the dullest fights in UFC history with neither woman doing much of anything across five rounds before Esparza was given the split decision win, becoming UFC champion more than seven years after losing the title.

To say little happened in the fight would be an understatement. By the end of five rounds, the two women had unofficially combined for less than 70 combined strikes.

From the opening seconds, much of the fight was spent with the two women standing at distance, feinting and occasionally throwing strikes from a distance where they had no chances of landing. The lack of action led the crowd to first boo before turning to complete indifference.

The deciding factor in the fight turned out to be Esparza’s takedowns, of which she only landed a few and never held Namajunas on the canvas for any significant time. Still, the takedowns were a show of aggression that was more than Namajunas had offered at any point in the fight.

When the official scorecards were read, they were 48-47 and 49-46 in favor of Esparza with one judge awarding Namajunas the fight by a score of 47-48. The crowd booed before, during and after the decision was read.

“You never know what’s going to happen with the judges,” Esparza said after the fight. “But I felt like I was the aggressor in the fight and I was going after it and going after it.”

It’s unlikely the UFC gives Namajunas a rematch in the near future, given the fight drew comparisons to some of the worst in UFC history. While Namajunas seemed shocked, Esparza was balancing joy with disappointment in the performance.

“You never want to be a part of a fight like that,” the new champion said.

Can’t get enough boxing and MMA? Get the latest in the world of combat sports from two of the best in the business. Subscribe to Morning Kombat with Luke Thomas and Brian Campbell for the best analysis and in-depth news, including instant analysis of UFC 274 from Phoenix at the conclusion of the PPV event.