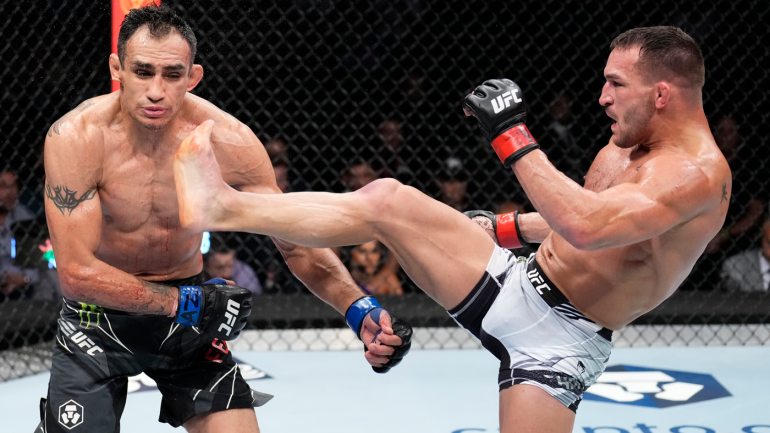 For one round at UFC 274, it appeared Tony Ferguson was finally ready to get back in the win column, showcasing some of his classic speed and power in the striking game. Then, seconds into Round 2, Ferguson was struck with one of the most violent knockouts in UFC history as Michael Chandler’s foot crashed into his chin, ending the lightweight fight in an instant.

Ferguson opened up the fight with some explosive strikes, stepping in with straight punches to counter the wild attack of Chandler. The clean striking had Chandler rocked twice and forced him to explode through a double-leg takedown to put the fight on the floor and slow things down. Ferguson was aggressive off his back, throwing elbows and punches as Chandler attempted to do the same from top position. The result of the two-way ground assault was both men heading back to their corners cut and bloodied.

In the second round, Chandler wasted absolutely no time before closing the show. As Ferguson stepped in, Chandler threw a front kick that landed clean to Ferguson’s chin, sending Ferguson to the canvas unconscious.

Ferguson remained motionless for several minutes, finally regaining consciousness and sitting on a stool before being able to stand in the center of the Octagon as Chandler’s hand was raised.

The win was an important one for Chandler, who had suffered losses to Charles Oliveira and Justin Gaethje in his two previous fights.

“We didn’t even train that that much,” Chandler said of the knockout. “It just kind of happened. He’s so long and leaves his hands wide and left a lane we wanted to throw an uppercut through.”

After his victory, Chandler called out Justin Gaethje for a rematch of their thrilling war before also issuing a callout to UFC superstar Conor McGregor for a clash at welterweight.

Can’t get enough boxing and MMA? Get the latest in the world of combat sports from two of the best in the business. Subscribe to Morning Kombat with Luke Thomas and Brian Campbell for the best analysis and in-depth news, including instant analysis of UFC 274 from Phoenix at the conclusion of the PPV event.

5 Letter Words Ending in NY with A – Wordle Clue

5 Letter Words with YAC in Them – Wordle Clue