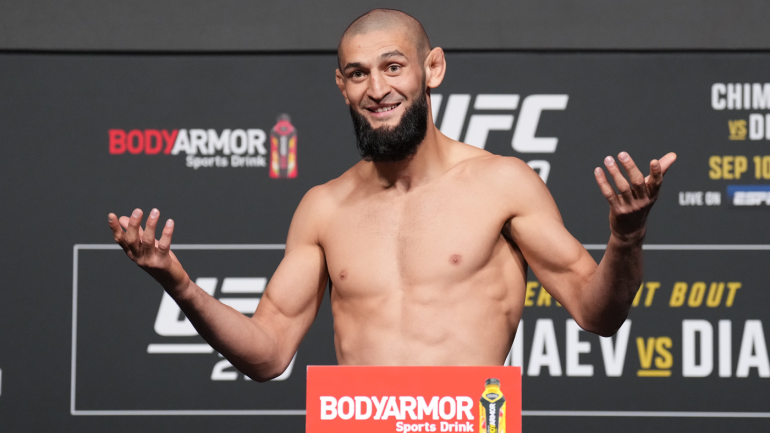 One day before he was supposed to headline UFC 279 in a bout with Nate Diaz that may have been the final step to a title fight, Khamzat Chimaev has badly missed weight. Chimaev stepped on the scales on Friday morning in Las Vegas and weighed in at 178.5 pounds, missing weight by 7.5 pounds when considering the one-pound allowance for non-title fights.

The weight miss is another step in a chaotic week for Chimaev, who was one of the central figures in a wild backstage altercation that forced a last-minute cancellation of the pre-fight press conference on Thursday evening.

Chimaev has been one of the most dominant fighters in recent years, blitzing through opponents while only being hit once in his first four fights in the Octagon combined. In his most recent outing, Chimaev outlasted former title contender Gilbert Burns in a wild fight. The win over Burns established Chimaev as a sure-fire title contender but with the title tied up between Leon Edwards and Kamaru Usman, Chimaev was slotted in to fight Nate Diaz in Diaz’s final fight on his UFC contract.

There have been reports that the UFC is looking at alternate options for the main event with Chimaev’s weight miss. Diaz would have to accept the fight with Chimaev now being at a catchweight as there’s no realistic — or safe — way for Chimaev to lose more than seven pounds in an hour.

Diaz is notorious for not playing political games and may well not accept the fight, even with financial benefits stemming from Chimaev miss.

In addition to Chimaev, many other fighters struggled on the scale on Friday. Another fight scheduled for the main card was moved up in weight when Irene Aldana and Macy Chiasson agreed to change their fight from a bantamweight clash to a 140-pound catchweight. Hakeem Dawodu, set for a featherweight clash with Julian Erosa in the prelim main event, missed weight by 3.5 pounds. And heavyweight Chris Barnett failed to make the maximum limit when he weighed in at 267.5 pounds.

Can’t get enough boxing and MMA? Get the latest in the world of combat sports from two of the best in the business. Subscribe to Morning Kombat with Luke Thomas and Brian Campbell for the best analysis and in-depth news, including a complete preview of UFC 279 below.

Leaving HBO Max in September 2022: 3 clever dramas to watch before they skip the platform

5 Letter Words with NAK in the Middle – Wordle Clue