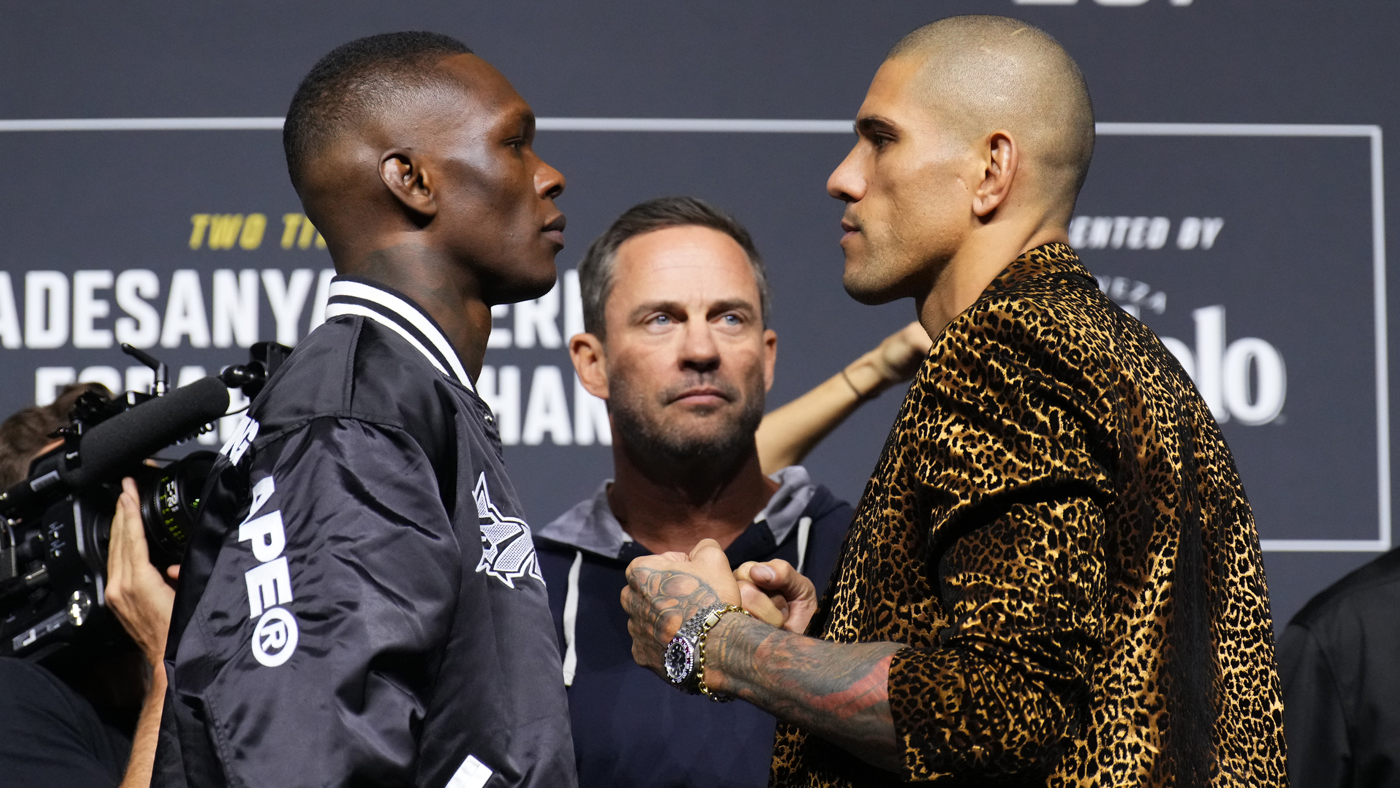 A ghost from Israel Adesanya’s past returns at UFC 281 on Saturday night. Adesanya defends his UFC middleweight champion against Alex Pereira, a vicious striker who defeated Adesanya twice in the kickboxing circuit and remains the only person in combat sports to knock him out. A story-rich headliner for the promotion’s return to Madison Square Garden in New York City.

Adesanya, armed with a sublime and stifling striking game, builds his case as the greatest middleweight of all time with each successful title defense. Adesanya will test the quality of his kickboxing game against arguably the only fighter who can meet or exceed it, former two-division Glory kickboxing champion Pereira.

Adesanya fought his way to the UFC interim middleweight and undisputed middleweight titles in his sixth and seventh UFC fights, respectively. A feat worth celebrating, but one eclipsed by Pereira’s accelerated rise through the ranks. A first-round KO of Sean Strickland at UFC 276 rewarded Pereira with a top-five ranking and a UFC title shot in just his fourth fight with the promotion. Adesanya — having defeated Anderson Silva, Robert Whittaker (twice), Yoel Romero, Paulo Costa, Marvin Vettori (twice) and Jared Cannonier — welcomes a difficult challenge.

Can’t get enough boxing and MMA? Get the latest in the world of combat sports from two of the best in the business. Subscribe to Morning Kombat with Luke Thomas and Brian Campbell for the best analysis and in-depth news, including a complete preview of UFC 281 below.

The women’s strawweight crown is also at stake on the card when Carla Esparza puts the belt on the line against former titleholder Weili Zhang. Esparza is looking for her first title defense in her second reign as champion — she also did not defend the title when she won it the first time in 2014.

Plus, a lightweight fire fight is set for the featured bout when former title challengers Dustin Poirier and Michael Chandler link up. The fight could catapult the winner into one final title shot in 2023. The card also sees the final fight of Frankie Edgar’s storied career when he takes on Chris Gutierrez at bantamweight. And lightweights open the show on the main card when Dan Hooker takes on Claudio Puelles.

Follow along with compete coverage of UFC 281 live from Madison Square Garden for round-by-round scoring and play-by-play of all the action inside the Octagon beginning at 7:30 p.m. ET.

With so much happening on Saturday night, let’s take a closer look at the full fight card with the latest odds from Caesars Sportsbook before we get to our staff predictions and picks for the PPV portion of the festivities.

Campbell: For as good as the backstory is of Pereira having twice defeated Adesanya in kickboxing, including once by brutal knockout, the differences between the two as mixed martial arts can’t be forgotten. Yes, Pereira has frightening power in both hands but he’s also still so incredibly green as an MMA fighter with just seven pro fights, including three in the Octagon. The threat of Pereira’s striking should produce a focused Adesanya who is ready to counter at all times, unlike the more loose, point fighter he has become of late when contenders aren’t willing to go for broke against him. Pereira should be plenty willing, which will mean Adesanya must be at his very best. But the deeper the fight goes, the more unknown questions emerge for Pereira, including everything from his stamina and ground game to his ability to make adjustments.

Brookhouse: Despite Pereira having two kickboxing wins over Adesanya, Adesanya is the better striker on a technical level. Pereira is one of the pound-for-pound heaviest hitters in the sport, though, and someone who is going to be unwilling to allow Adesanya to sit back and point fight. The mind games could also come into play, though I believe that would be something that leads to Adesanya looking to “make a point” rather than becoming gunshy. The problem I see for Adesanya is that engaging in striking is uniquely dangerous for him in this fight. Yes, he is better technically, but MMA gloves not only lead to harder shots from Pereira but also to more difficulty in defending against those shots coming at you. An Adesanya win is the more likely outcome, but this feels like the kind of fight where the challenger has a well above average chance of pulling off the upset. It only takes one shot from Pereira to end this fight while Adesanya has to be on point at all times.

Mahjouri: It feels like some time since siding with Adesanya required such caution. Pereira has the more powerful kickboxing and is brimming with confidence having defeated Adesanya in two previous kickboxing matches. Adesanya is the more elusive striker, employing feints, footwork and counterattacks that disarm most opponents. Pereira has proven far more hittable in the Octagon thus far, which should work to the champion’s advantage. On the surface, Pereira’s KO of Adesanya in their second kickboxing fight is concerning. A full watch through of that fight, however, shows that Adesanya was having his way with Pereira before the finish. An Adesanya decision win or Pereira KO seems most likely, let’s side with the former.

Campbell: Rarely before has a two-time champion riding a six-fight win streak been this aggressively dismissed by seemingly everyone heading into a title defense. But whether it’s fair or not that fans continue to blame Esparza for how boring her title victory over Rose Namajunas was in their May rematch, few are expecting her to exit the Octagon still wearing her 115-pound belt. The reason is largely because of how much better Zhang has seemed to have gotten as a fighter since losing her title to Namajunas. Zhang, the first Chinese-born UFC champion, rebuilt her body and improved her wrestling skills enough to see oddsmakers install her as nearly a 4-1 favorite. Considering four of Esparza’s six recent wins featured disputed scoring, Zhang appears to be the smart pick for good reason.

Mahjouri: Zhang is a powerhouse among strawweights. Few in the division rival her ability to land crushing blows. She certainly has the striking edge against Esparza but so do most of the top contenders. A glance at Zhang’s 60% takedown defense is concerning, but I expect her coaches have put a lot of emphasis on her wrestling to pair with her physical strength. (Hopefully) improved wrestling, natural strength and head-rattling power should lead Zhang to victory.

Campbell: When you risk it all from the opening bell for the first five minutes of every fight, you are going likely win just as much as you lose. Chandler’s exciting 2-2 run since making his UFC debut last year seems to support that. But the former three-time Bellator MMA champion’s blitzkrieg approach might also be his best chance at getting to the chin of Poirier, whose accumulation of damage over an incredible career will one day catch up to him. Even if Chandler follows through on his threat to play it safer than normal (by wrestling) given that a title shot could be in play for the winner, the fireworks fans expect should still be there eventually. Chandler nearly knocked out then-champion Charles Oliveira in 2021 and appears poised for a possible second run at the belt.

Brookhouse: Yes, the logic that “one day” Poirier may lose all punch resistance is reasonable. But there’s no proof that that day has come. Chandler, meanwhile, has a notoriously crackable chin, especially for someone who fights in the style that he does. It still feels like a minor miracle that he made it to the scorecards against Justin Gaethje. Chandler was dropped by a badly faded Tony Ferguson and just gets hit too cleanly, too often to pick him against someone with the precision and overall gameplan of Poirier. Chandler always has the very definition of a “puncher’s chance” but his better path to victory may be to be a wrestler first, striker second. I don’t see him following through on that plan once Poirier starts to land. Chandler likely goes right to his habit of overly engaging with wild strikes that will leave him open to crisp shots from Poirier before a stoppage.

Who wins Adesanya vs. Pereira? And how exactly does each fight end? Visit SportsLine now to get detailed picks on every fight at UFC 281, all from the incomparable expert who’s up more than $13,000 on MMA in the past three years, and find out.