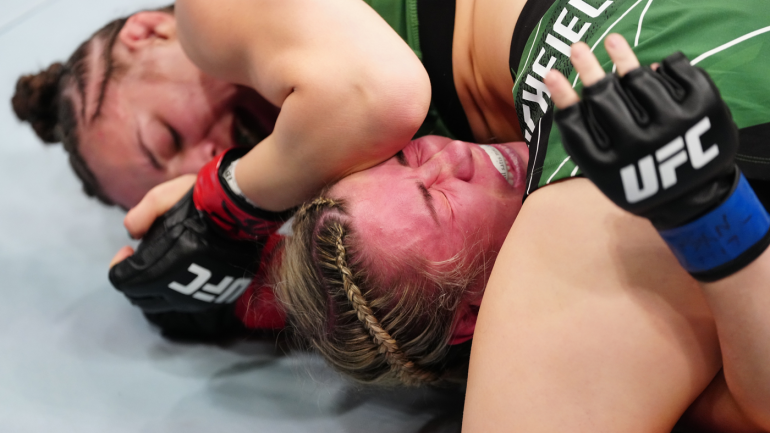 The hype for Erin Blanchfield will likely hit another level after the 23-year-old ripped through fan-favorite Molly McCann on the UFC 281 prelims. Blanchfield dominated nearly every second of the fight before forcing McCann to submit to a kimura in the first round in front of a stunned Madison Square Garden crowd..

McCann’s powerful strikes never truly came into play, with Blanchfield landing a few crisp shots of her own before driving through a takedown. Once the fight hit the canvas, Blanchfield never looked back, using her superior grappling to leave McCann in the dust.

Blanchfield locked McCann’s arms down in a crucifix and dropped heavy punches and elbows before locking in a deep kimura. McCann managed to gut through the torque on her arm to survive the first submission attempt. After McCann got her arm free, Blanchfield re-secured the crucifix and landed more powerful strikes.

Blanchfield returned to the kimura a second time, twisting McCann’s arm until the Brit was forced to tap out at the 3:37 mark of Round 1.

With the win, Blanchfield improves to 10-1 in her career and 4-0 inside the UFC Octagon. McCann had a three-fight winning streak snapped by the defeat and her UFC record fell to 6-4.

Can’t get enough boxing and MMA? Get the latest in the world of combat sports from two of the best in the business. Subscribe to Morning Kombat with Luke Thomas and Brian Campbell for the best analysis and in-depth news, including instant analysis of UFC 281 at the conclusion of the PPV event below.

An extravagant one might have a swimming pool Crossword Clue