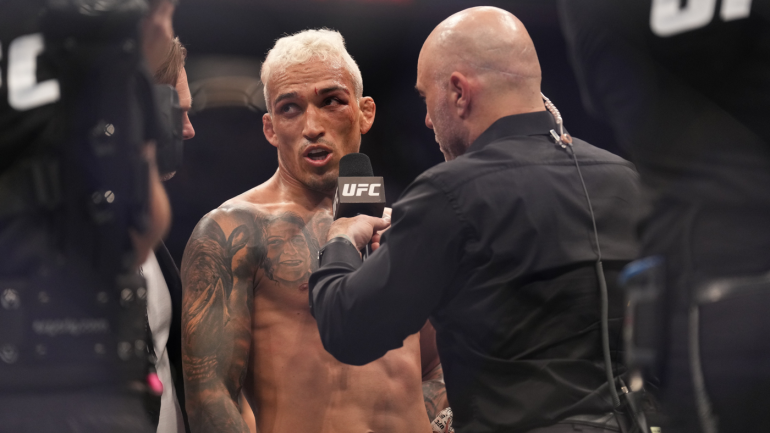 Charles Oliveira vs. Conor McGregor is top of mind for “Do Bronx.” McGregor has won only a single fight in the last five years yet remains MMA’s most bankable star. Oliveira is the first to admit that a fight with “The Notorious” one is primarily about pay.

Oliveira is considered by many as the uncrowned king of lightweight. Oliveira was stripped of his UFC lightweight championship after missing weight ahead of his UFC 274 title defense against Justin Gaethje. Several fighters accused an inaccurate hotel scale of playing a role in that week’s weight mishaps. Oliveira’s thrilling first-round finish of Gaethje put his weight miss in the rearview mirror as UFC president Dana White promised Oliveira the next title shot.

“[Conor McGregor] would be a very good fight for me,” Oliveira told ESPN Brazil regarding his next opponent. “It would put a lot of money in my pocket, and [at this moment] that’s the most important thing. And it would also be really good for my legacy, for me to have in my story. Regardless, if he’s coming from defeat or not, he’s a guy who’s made history, so I think it would be great, but it’s not just up to me. If it were up to me, this fight would already be happening.

There is a fan appetite for Oliveira vs. Islam Makhachev. That fight is considered the closest thing today to Oliveira vs. Khabib Nurmagomedov. “Do Bronx” is complimentary of Makhachev’s skillset but critical of his resume. The top contender said that wins over opposition like Bobby Green, Dan Hooker and Thiago Moises do not justify a UFC lightweight title shot.

“I’ve never ran from a fight and the lightweight champion is called Charles Oliveira,” Oliveira said. “Is Islam a very tough guy? Yep. Did he fight big names? No. He’s on a big streak, but who did he fight?”

UFC appeared interested in booking Khamzat Chimaev vs. Nate Diaz for the summer. Diaz has desperately campaigned to fight and get out of his UFC contract and Chimaev is happy to help him out. Chimaev is champing at the bit to maul Diaz but says it has never come close to materializing. “No, it’s never been close [to a done deal],” Chimaev said on the Blockparty podcast. “The skinny boy, when I said let’s fight, I was [at a] good weight, good shape, and now I’ve been lifting weights, I go up like three kilos. Now he says let’s fight… He was thinking, is August too early to cut weight? I don’t care, I’m going to cut my weight and fight with him if he’s ready. I’ll smash that boy. He won’t be the same Diaz anymore.”An upcoming bantamweight matchup could launch the winner into a title eliminator. Jose Aldo vs. Merab Dvalishvili is being targeted for UFC 278 in Salt Lake City, Utah on Aug. 20, according to journalist Ariel Helwani. Aldo (31-7), the former UFC featherweight champion, rides a three-fight winning streak at 135-pounds after a rough start in the division. Relentless wrestler Dvalishvili (14-4) has won seven consecutive UFC fights and earned a performance bonus in his last outing against Marlon Moraes. UFC 278 is headlined by welterweight champion Kamaru Usman vs. Leon Edwards.

Accelerate, as an engine Crossword Clue