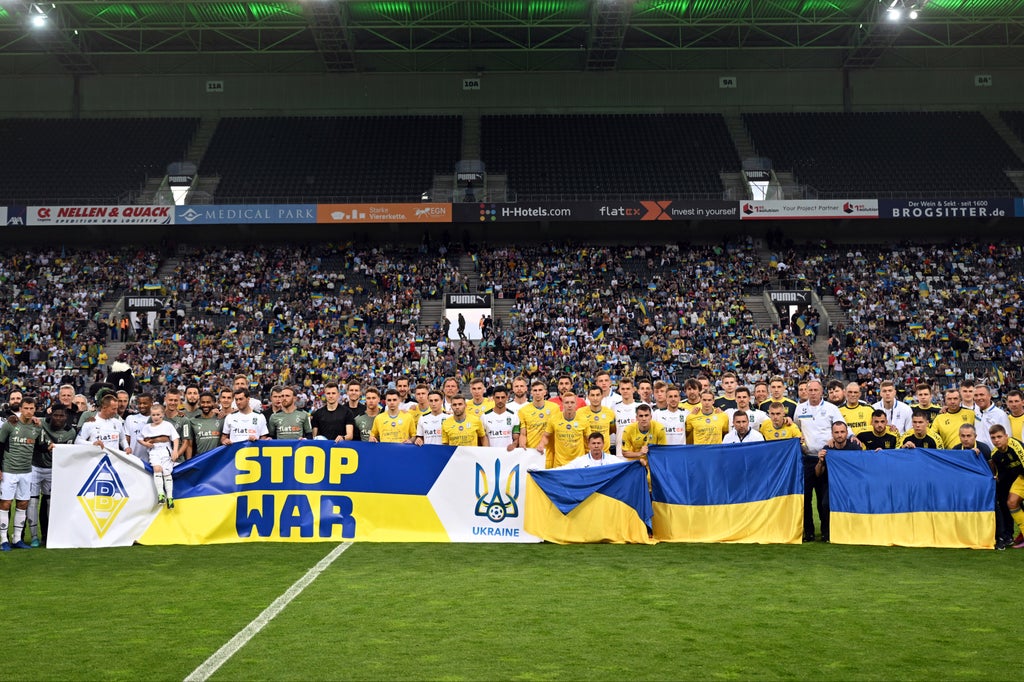 kraine’s men’s national team returned to action for the first time since Russia’s invasion of their homeland with a 2-1 friendly victory over Borussia Monchengladbach on Wednesday night.

Ukraine have not played competitively since beating Bosnia and Herzegovina in November. They were due to play against Scotland in a World Cup qualifying play-off semi-final in March, but that game was postponed because of the ongoing war.

With the majority of Europe’s major club seasons still ongoing, Ukraine fielded only players from their domestic league, which was terminated last month in the wake of Vladimir Putin’s invasion.

Players from both teams held up a “Stop War” banner ahead of kick-off before goals from Shakhtar Donetsk’s Mykhaylo Mudryk and Dnipro’s Oleksandr Pikhalionok secured victory over the Bundesliga side in front of 20,000 fans at Borussia-Park, with all proceeds going towards relief efforts in Ukraine.

The game also served as a first warm-up ahead of the rearranged Scotland play-off, which will take place on June 1 before the winner faces Wales for a place at this winter’s tournament in Qatar.

“I have no questions for the guys, at this stage they are good, they did well. There are a lot of mistakes, we will correct them.”

Ukraine have scheduled further friendlies against Serie A side Empoli and Croatian club NK Rijeka before taking on Scotland at Hampden Park in Glasgow next month.

5 Letter Words with EIH in Them – Wordle Clue

Tottenham: Why Levy must buck transfer trend with bold Conte…