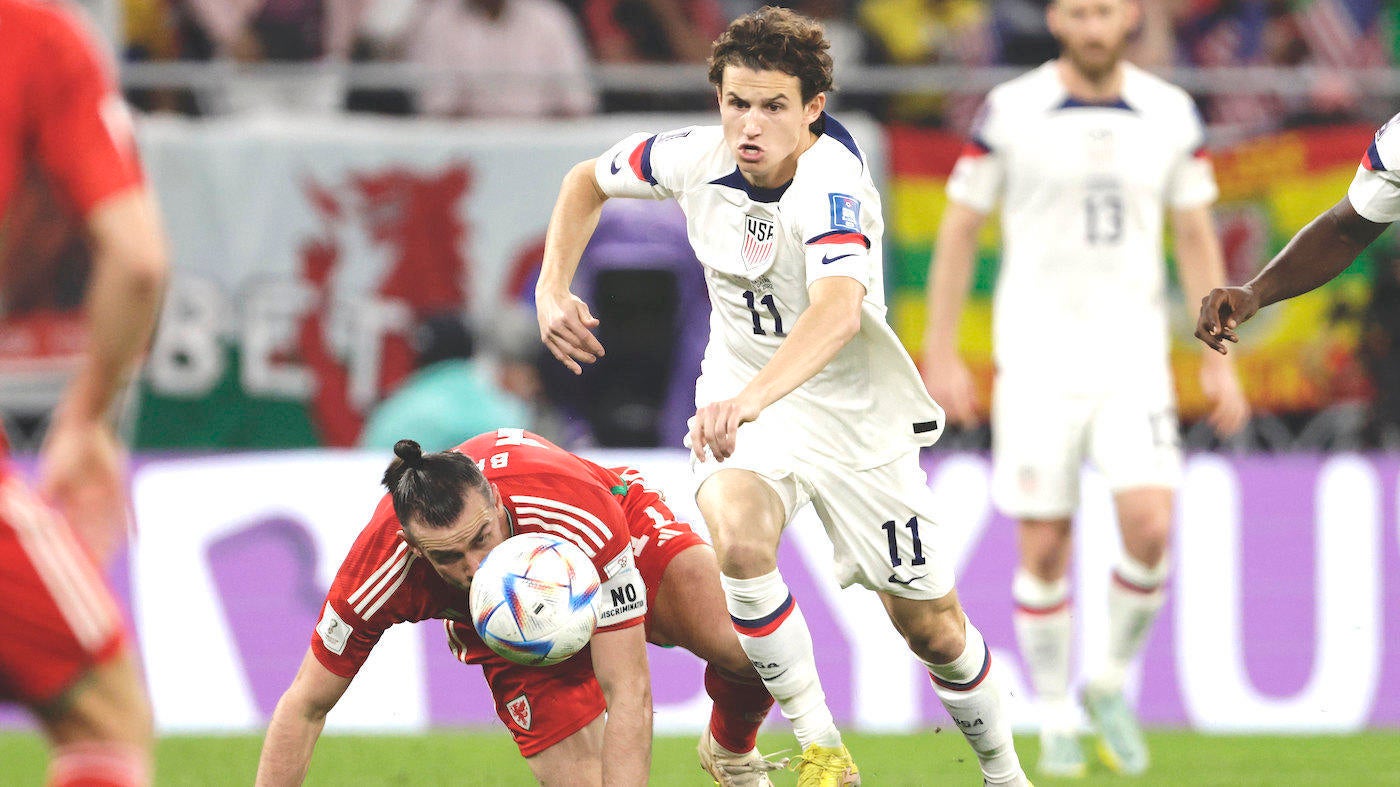 CBS Sports soccer analyst Grant Wahl is in Qatar covering his eighth men’s World Cup. He’ll be writing mailbag columns for CBS after every USMNT group-stage game. The rest of his writing, including magazine-style stories, interviews and breaking news, can be found on GrantWahl.com.

DOHA, Qatar — Greetings from the World Cup! I’m fired up to be doing some mailbag columns for CBS around U.S. games, and I appreciate all of you who supplied the questions. Let’s dive in:

“Do you think inexperience got the best of USMNT, or is that downplaying Wales’s push to bounce back?” — @8bitSerge

One of the few things that I thought showed the U.S.’s inexperience were the two yellow cards early in the game earned by Sergiño Dest and Weston McKennie. I didn’t have a problem with the two other U.S. yellows for Tim Ream and Kellyn Acosta because I thought they were smart to get them. But give Wales credit for making changes ahead of the second half and controlling the game much more afterward. In terms of inexperience, Walker Zimmerman is 29, but this was his first World Cup game, and going to ground in the penalty box like he did against Gareth Bale is something that I don’t think he will do in the future once he has more World Cup games under his belt.

“Do we run too much? No, seriously. MMA have to cover laterally for outside backs and push forward for late runs into the box.” — @UsmntReactions

The fact is that among the U.S. midfielders, Tyler Adams has the fitness and the Energizer-bunny motor to be able to run as much as he did against Wales and still look good by the end of the game. That wasn’t the case for Yunus Musah, who was laboring before he came out in the 74th minute, and McKennie, who came out in the 66th minute and isn’t yet fit to play 90 minutes after his thigh injury at Juventus. I don’t think the U.S. midfielders necessarily run too much, but they are asked to do a lot.

“Will Berhalter’s undoing be his lack of a set lineup? USMNT fans are pretty hot with how he managed yesterday’s match, I’m curious what your take on his tactics are.” — @EdricAlexi

I thought Berhalter got the big calls on the starting lineup right against Wales. Tim Ream was the better choice instead of Aaron Long, and Tim Weah proved to be the right call ahead of Gio Reyna and Brenden Aaronson. I don’t expect the U.S. to have a set starting XI at this World Cup, nor do I think Berhalter should. Aaronson and Reyna should start at some point in this group stage, and I think they will. Rotation in those cases is smart. I do think you could certainly argue that subbing in Jordan Morris instead of Reyna when the U.S. needed a goal is a total head-scratcher, though. That didn’t make sense to me. But I also know that Berhalter is a big Reyna guy and certainly doesn’t hold anything against him.

“Should Pulisic be an automatic starter and if not, would Gregg have the guts to start someone else in the World Cup?” @MikeDeCicco

I don’t think anyone should be a 100% automatic starter, and there were times during qualifying (Mexico at home, Honduras at home) when Berhalter brought Pulisic on as a sub. (He scored in both those games.) I expect Pulisic to keep starting at this World Cup because he’s one of the U.S.’s best players and had an overall good game against Wales despite some hot takes otherwise.

This has been a poor World Cup so far for stadium food. The only thing I saw last night that looked semi-edible was “French cheese”-flavored potato chips. We spent some time trying to figure out which “French cheese” was the basis for the chips but struggled to do so in the end.

“Can you get a sense of the general Qatari reaction to statements (such as your rainbow shirt) and the global outrage of the handling of those statements or protests? Glad you came through that situation unscathed!” — @cbmackey

Thanks! I honestly don’t know what the general Qatari citizen reaction to my shirt was, because it’s kind of hard to meet actual ordinary Qataris here. More than 90% of the workforce in the country is migrant workers from other countries, and they are easier to meet here, often as Uber drivers, domestic workers, etc. I do sense that the Qatari regime/royal family feels like they are the victims of some sort of anti-Arab Western sentiment. But they’re not victims. They’re actually some of the perpetrators of the human rights violations that have taken place in this country.

“How can we stop FIFA from continuing to put their financial interest ahead of what’s best for the game?” — @RikoSuave27

This is the eternal problem: The average soccer fan around the world really has almost nothing it can do to compel FIFA to change its ways. FIFA’s choice to stage this World Cup in Qatar (and the 2018 World Cup in Russia) was corrupt, and the U.S. Department of Justice has said exactly that, citing plenty of forensic evidence. Qatar and Russia deny this. I’d suggest watching “FIFA Uncovered,” the four-part documentary series on Netflix that details the rise and fall of FIFA, in addition to the U.S. DOJ investigation. In the end, the only entity anywhere that puts any fear into the rulers of FIFA was the United States government. I’m glad the U.S. did the investigation and FIFA sting operation in 2015. It should be a point of pride for every American citizen.

“Midfield is supposed to be our strength but the touch maps of the Wales game suggest a lot of wing play followed by lousy crosses. What can the U.S. do to make it more central?” — @AJShaughnessy

Well, it would certainly help if the crosses were better! It’s hard to apply lessons from the Wales game to the England or Iran games to come because Wales was deployed in a 5-3-2, and that won’t be the case with U.S. opponents moving forward. The U.S. scoring sequence against Wales was actually an example of what the team had been drilled into trying to do during preparations. Josh Sargent dragged defender Joe Rodon out with him and laid the ball off to Pulisic, who darted into the space left by Rodon before passing to Weah for the goal. The U.S. didn’t do enough of that against Wales, though, which meant there was little ball usage in the center of the field. I expect the U.S. will have much less of the ball against England and look to strike on the counterattack.

“Your thoughts on whether there’s someone better than Pulisic to take the kicks on set pieces?” — @unc8689

The two players I would want are Aaronson and Acosta, who have proven to be better taking set-pieces than Pulisic has over a while now. But one of Aaronson and/or Acosta needs to start for that to happen. I think we’ll see Aaronson in a starting role against England.

“What’s the ratio of male vs. female USMNT fans in Qatar? Or fans in general that you’re seeing?” — @spolich77

There are probably a majority of male fans among the USMNT group here, but not by that much since there are a number of women, including regulars I see on just about every trip. I’m also intrigued by the fans of the North African and Middle East teams and how many women are part of those groups. There wasn’t a single woman that I saw in the hardcore Qatar supporters section during the opening game. But I saw a bunch of women in the Tunisia fan section today.

“We obviously had a starting XI designed to do some specific things vs Wales. What are the changes/tactics vs. England?” — @Todd9115

I think we’ll see Aaronson or Reyna in the starting lineup against England, though one question I still have is whether Weah could start as the No. 9 in that game. We’ll see if the knock that sent Yunus Musah out of the Wales game becomes a continuing issue. If that’s the case, then Acosta might be an option to start. But I’m not foreseeing any changes on the back line or in goal.

CBS Sports soccer analyst Grant Wahl is in Qatar covering his eighth men’s World Cup. He’ll be writing mailbag columns for CBS after every USMNT group-stage game. The rest of his writing, including magazine-style stories, interviews and breaking news, can be found on GrantWahl.com.

Morocco 0-0 Croatia: Honours even as Group F rivals cancel each other out at World Cup 2022

5 Letter Words with ERAB in Them – Wordle Clue

5 Letter Words with EBAM in Them – Wordle Clue

5 Letter Words with EMRB in Them – Wordle Clue