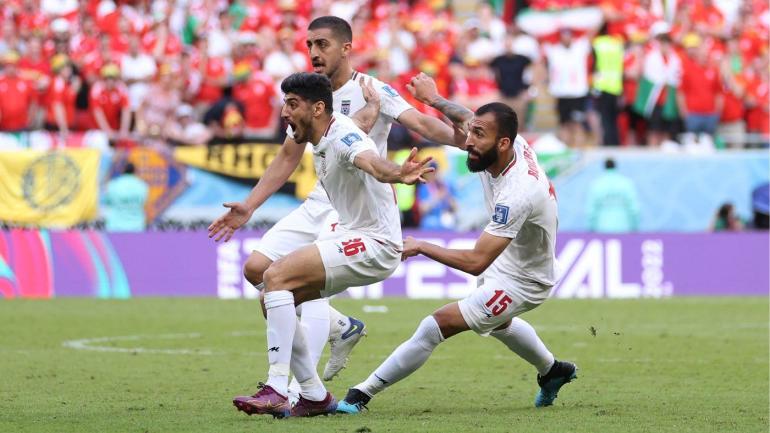 Group B at the 2022 FIFA World Cup is suddenly wide open after an incredible ending saw Iran beat Wales 2-0 in Al Rayyan on Friday.

A goalless draw was playing out at Ahmed bin Ali Stadium before Wayne Hennessey received the first red card of this tournament via VAR in the 86th minute.

It all started during the anthems when the Iranian players sang — unlike against England — while their supporters booed owing to the current political situation back home and there were tears and anguish in the crowd.

Carlos Queiroz’s men did not take long to find their stride with an Ali Gholizadeh goal ruled out from a Sardar Azmoun pass correctly for offside through VAR after the first 15 minutes.

However, a combination of an inspired Hennessey and the woodwork twice within 60 seconds kept the Welsh in it as the clock ticked down and captain Gareth Bale and midfielder Aaron Ramsey could only watch on as passengers in an uninspiring collective performance.

All of this set the stage for incredible drama as Hennessey charged out of his goal and clattered into Mehdi Taremi after 86 minutes only to initially be shown a yellow card before VAR upgraded it to red.

It was like Harald Schumacher’s villainous assault on Patrick Battiston back in 1982 and ate up enough time to ensure that there would be over 10 minutes added on at the end of the game.

This is where the drama really kicked up a level as Cheshmi hit a stunning strike after 90+8 minutes to send the Iranian contingent into ecstasy with a goal that was no less than thoroughly deserved after doing everything but socre earlier on.

One became two with almost the final kick of the game as Rezaien dinked home Team Melli’s second to cap an incredible finale to what looked on paper and for 85 plus minutes like being just another goalless group game.

In terms of Group B, Iran go second behind England ahead of the Three Lions’ clash with the USMNT with the Americans now facing a potentially decisive clash with the Iranians regardless of their result against Gareth Southgate’s men — and while you’re at it, sign up for our new newsletter covering the beautiful game in all its glory, including daily updates about the World Cup, here.