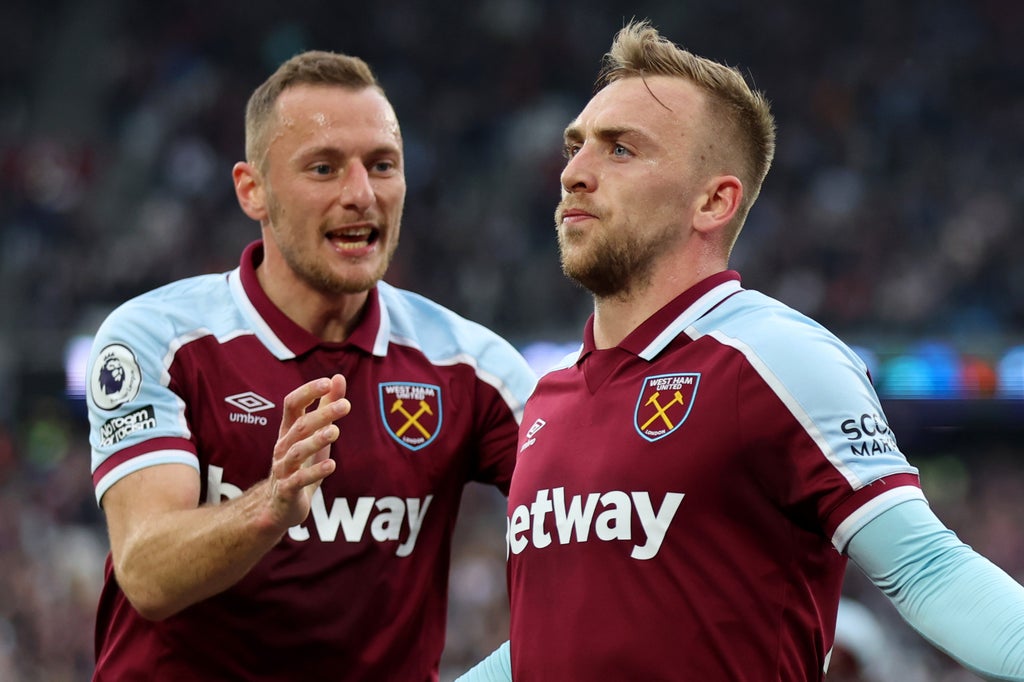 ladimir Coufal hailed West Ham team-mate Jarrod Bowen after the winger took his Premier League assists tally into double figures for the season, claiming: ‘We just have to give him the ball!’

Bowen played a major part in all three of the Hammers’ first-half goals in yesterday’s 4-0 thrashing of relegated Norwich at Carrow Road, providing both assists for Said Benrahma’s brace and playing in Michail Antonio before a blunder from Canaries ‘keeper Tim Krul left the forward a tap-in.

Manuel Lanzini completed the scoring with a second-half penalty, but despite not getting on the scoresheet himself it was Bowen who again provided the Hammers’ chief threat.

The 25-year-old is the first West Ham star to reach 10 goals and 10 assists in the same league season since Paolo Di Canio in 1999/2000, with Liverpool’s Mo Salah, who was named FWA Footballer of the Year last week, the only other Premier League player to have managed the feat this term.

His form has raised expectations of a first England call-up arriving when Gareth Southgate names his squad for this summer’s Nations League games against Italy, Germany and Hungary later this month, with the former Hull man having been unavailable for the March international break because of injury.

“Jarrod’s been playing well since last season,” Coufal said. “I’m happy for him and I enjoy playing alongside him. All you have to do is give him the ball because he will either score or provide an assist.”

Benrahma’s double took his own league tally to eight, just two fewer than Bowen, but the Algerian’s 12th-minute opener was only his second goal since the turn of the year, highlighting the inconsistency that has dogged his season after a superb start to the campaign.

“It’s good for his confidence because as an attacking player he’ll want to score more goals and provide more assists,” Coufal added. “He always tries to be confident on the pitch. He’s a good dribbler and in games like these he shows why he’s a good player for us.”