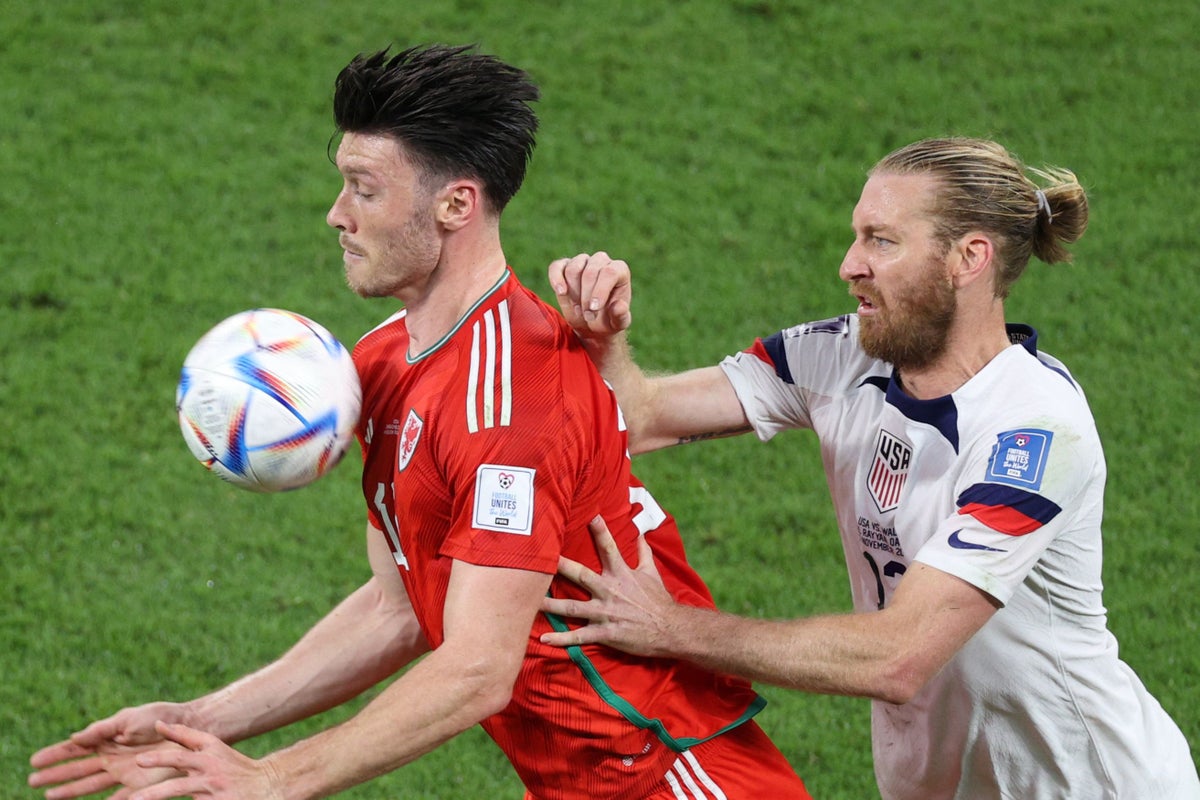 Moore was a surprise exclusion from the starting XI for the opener against the USA on Monday night, as Rob Page opted for an extra midfield body and a front-two of Gareth Bale and Dan James.

Wales were dominated during the opening 45 minutes, but Moore’s half-time introduction proved a turning point, and Page’s men fought back to earn a 1-1 draw, thanks to Bale’s late penalty.

“I wanted to impose myself on the game and do what I could, so hopefully I am in a position to start on Friday,” said Moore, who started three of Wales’s four games at the Euros last summer.

“Over the past four or five years, I feel like I’ve really grown as a player and I really enjoy these big moments. When I’m called upon for these moments, I’ve always put up performances and I can’t wait for Friday.”

Focal point: Kieffer Moore’s introduction changed the game for Wales against the USA

At 6ft 5in, Moore’s potential presence is bad news for an Iranian side who struggled to deal with England’s threat in the air during their 6-2 thrashing on Monday afternoon.

Harry Maguire hit the crossbar with an early header and ought to have had a penalty when being wrestled to the ground at another corner. Jude Bellingham eventually opened the scoring with a header from Luke Shaw’s cross, while Bukayo Saka’s first strike also came after Maguire had knocked down from a set-piece.

“I was, yeah,” said Moore, when asked whether he had watched Iran’s defensive display with interest. “They did struggle in the air. You could see England’s dominance in the box. They took a lead straight away and that set the tone for the game.

“It was 3-0 at half-time and England played really well to utilise those positions to get the ball into the box. If we can replicate that then, hopefully, we’ll get the same outcome.”

As well as a possible change to his forward line, Page must decide whether Joe Allen is fit to be involved, after the Swansea midfielder returned to full training on Wednesday.

Are the Cowboys already in panic mode? Plus, kickers caused craziness on first NFL Sunday